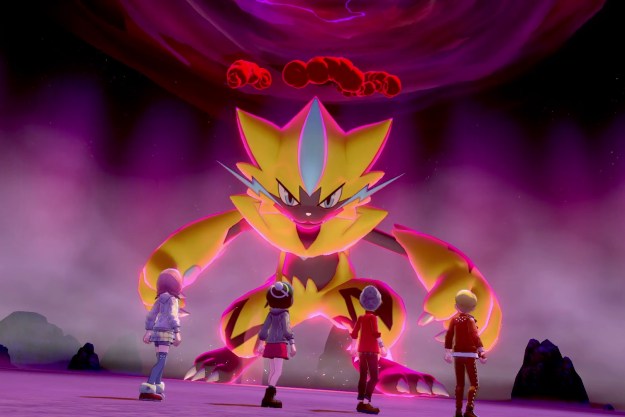 “The Isle of Armor improves on Pokémon Sword and Shield's open world experiments with a light expansion.”

Pokémon Sword and Shield’s The Isle of Armor DLC is as much a bold step forward for the franchise as it is an inevitability. The series has always flirted with the idea of Pokémon being a long-tailed service game but taken baby steps to the altar.

That’s because there’s always been an odd tension in Game Freak’s approach to its mainline RPGs. Players are asked to forge lifelong bonds with their monsters, but just as easily throw them to the curb once next year’s sequel or remake comes along. Isle of Armor marks the first time the developer has asked players to continue their journey, rather than rushing them along to a new adventure.

While the expansion lacks the depth needed to turn Pokémon Sword and Shield into an enticing ongoing experience, Isle of Armor is a pleasant little coda that improves on some of the base game’s best ideas.

The expansion is set on an entirely new island east of Sword and Shield’s U.K.-flavored Galar. The titular Isle of Armor has a completely different feel, trading in industrial cities for sunny beachsides more akin to Sun and Moon’s Alola region.

The compact locale is a successful second draft of the Wild Area, the base game’s sprawling field populated with Pokémon. Whereas the Wild Area often felt disconnected from the rest of the game, the new island is a more natural implementation of the idea. Lush marshlands seamlessly weave into remote caves and shady forests. Moving from place to place feels fluid as if the island is one cohesive ecosystem.

It’s not just the interconnected design of the island that makes it work better. The expansion’s story is built around the new location. Isle of Armor sends players to a Dojo and asks them to complete a series of trials. Each mission is less about fighting and more about setting out to explore each corner of the island. One early task sends players racing around marshlands to hunt down three speedy Slowpoke (a delightful oxymoron). It’s a cute micro-mission that gives a good narrative reason to take in the scenery.

The best example of that design comes from a subquest that asks players to track down 150 Alolan Digletts. The creatures are scattered throughout each sector of the island, and players receive Alolan Pokémon in exchange for locating them. To find them all, players will need to search every nook and cranny of the new location. It’s a simple activity that rewards those who learn the world inside and out.

Moving from place to place feels fluid, as if the island is one cohesive ecosystem.

The trade-off to the exploration-focused gameplay is that the DLC is very light on battles. There are only a handful of short fights throughout the campaign, which may be out of necessity. I arrived at the island with a team of Pokémon pushing level 70. Opponents scale to players’ level a bit, so someone who is just starting Sword and Shield can pop right in, but I found myself 10 levels above my opponents most of the time. I breezed through almost every battle with nothing but a Pelipper.

There’s a lack of challenge for fans who kept playing Pokémon Sword and Shield after its credits rolled, but Isle of Armor isn’t about pumping the difficulty. It’s a sightseeing trip for players of all skill levels to enjoy.

It’s hard to revisit Sword and Shield without reflecting on the Dexit “controversy” that failed to hurt the game’s record-breaking sales. For some diehards, Game Freak’s decision to slash the number of Pokémon in the game was a nail in the coffin for the series. Others grew to love the move, which made filling out Galar’s Pokédex an attainable goal.

The expansion pays off Sword and Shield’s initially slimmed-down roster.

It seemed fairly obvious that the games would add more creatures over time, despite conflicting statements from Game Freak. Like clockwork, Isle of Armor brings over 100 Pokémon to the game, including many favorites from the original 151.

The well-timed addition is super effective on a few levels. For fans who have been conditioned to catch ‘em all, there’s a new Pokédex for them to fill. The competitive scene is getting a fresh shake-up too, with Pokémon from games’ past entering the online arena. Meanwhile, those who were sad that their favorites didn’t make the original cut have cause to celebrate.

Stirring in new some new Gigantamax forms and raid battles, the expansion pays off Sword and Shield’s initially slimmed-down roster. If November’s Crown Tundra DLC adds another batch, the final version of the game should feel much closer to what naysayers wanted from day one.

After a few hours of exploring the island and leisurely checking off the story’s tasks, I came up against a Wailord-sized roadblock. In order to progress the campaign, I needed to evolve Kubfu, the expansion’s newest Pokémon. To do that, I would have to complete a five-battle gauntlet with my little grey pal.

The catch? An NPC informed me that Kubfu should be around level 70 to prepare for the battle. He joined my party at level 10.

Despite the hundreds of creatures to collect and the wide-open spaces to explore, Pokémon’s endgame is still incredibly limited.

I had enough Exp. Candy to catapult him to that requirement, but I wanted to see what it was like to train him up naturally. Something became crystal clear less than an hour into the exhausting grind: There is not much to do once you’ve beaten Pokémon Sword and Shield.

Despite the hundreds of creatures to collect and the wide-open spaces to explore, Pokémon’s endgame is still incredibly limited. If I wanted to train the old-fashioned way, my options were to run the championship for the 100th time or fight wild Pokémon. I opted for the candy method in the end.

Isle of Armor brings a few new features, but it doesn’t add much long term value to the base game. The closest it gets is the new Restricted Sparring mode, which is a challenging variant of the Battle Tower. Once the story was complete, I found myself right back where I was when I beat the game last year: A PC full of Pokémon and nothing to do with them.

Maybe Game Freak’s hesitations about modernizing the franchise’s business model were justified all along. Maybe Pokémon games are meant to be definitively conquered. Maybe the fun is in starting over. Isle of Armor doesn’t make a strong case for changing how long players stick with one Pokémon game, but it’s a sunny interlude while they wait for their next journey to begin.

The Isle of Armor is a light summer vacation for players old and new. The emphasis on exploration successfully builds on the base game’s experiments in open-world design. The DLC misses its opportunity to transform Pokémon Sword and Shield into a long-term experience, but it gives players a good reason to check-in on their friends.

Unless a new mainline RPG gets a surprise release this year, Isle of Armor is the only thing that will fill Pokémon cravings until November’s DLC.

It took around five hours to finish the campaign, find two-thirds of the Alolan Diglett, and explore each sector of the island thoroughly.

Yes, if you just want more Pokémon Sword and Shield. It’s not a groundbreaking package, but it’s a fun excuse to see some old favorite monsters.