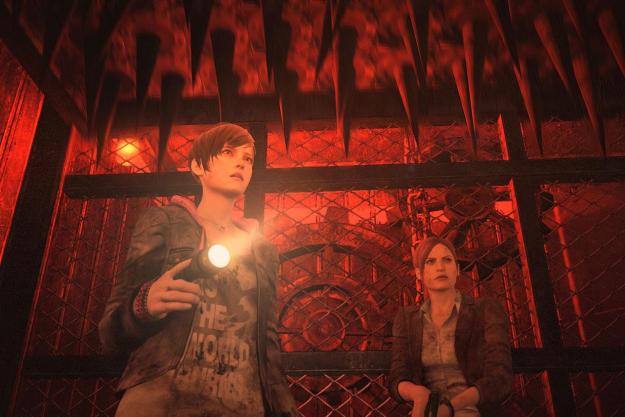 In comic books, you’ll sometimes spot an Issue #0. These one-offs usually help set up a larger event, storyline or character arc, providing backstory and context for what is to come. They can be dramatic, funny, action-packed, and nice to look at, but they’re also often light on substance, and rarely are they considered a “must-have,” save for the most diehard of fans.

As the Resident Evil series has aged, it’s also been split and fractured.

In summing up Resident Evil: Revelations 2, I can think of no better comparison. This is an Issue #0 of Capcom’s survival-horror universe; a game that features series staples – the undead and the mutated, impractical mansions, obtuse puzzle-solving, and campy, theatrical villains – but ultimately feels like a prelude and preview of something more grand.

In a sense, Revelations 2 accomplishes this well. The first chapter of this episodic game begins with heroine Claire Redfield and her friend Moira Burton being besieged by men with guns and a helicopter before waking up in an island prison. It’s an opening reminiscent of Resident Evil: Code Veronica, another game starring the ponytail-ed heroine.

The prison provides a claustrophobic atmosphere, filled with dread, mystery, and scientific experiments gone wrong. An omniscient Overseer taunts the pair, switching between proclaiming that their deaths are near and quoting Franz Kafka. Once Claire and Moira reach their cliffhanger, the perspective shifts to Barry Burton, who has come to the island in search of his daughter.

Both sections give players a second character to guide through the treacherous landscape. These characters can be either AI or human-controlled, and their abilities differ extensively. Moira uses a flashlight to search for items and blind enemies, while a young girl named Natalia assists Barry by squeezing through small spaces and using a sixth sense to tell where enemies are.

It’s an interesting concept, though an unevenly implemented one. Moira and Natalia both remark how they want to be of use and not a burden to their protectors, but it’s hard to think of them as anything other than tag-alongs that need only be called upon to solve a small puzzle or open a lockbox. Natalia’s special ability also has the uncanny ability to suck the suspense from the game. After all, you can’t be ambushed by a zombie lurking on the other side of a door if you know it’s waiting for you.

Thankfully, the companion characters aren’t the only difference between campaigns. Where Claire and Moira must often fight mutated prisoners who are still mostly human, Barry frequently crosses paths with more monstrous creatures and the undead. In this way, Revelations 2 provides an experience that nods to previous Resident Evil games, both those from long ago and those that exhibit Resident Evil 4‘s massive influence.

Unfortunately, the problem with paying homage to your own product is that there’s a fine line between honoring what’s come before and simply checking off boxes of what to include. Revelations 2 wears its heritage on its sleeve, and that’s fine. But it’s also predictable.

For example, it’s easy to categorize each episode of Revelations 2 by the aspect of Resident Evil which it represents. Episode 1 is officially called “Penal Colony,” but it as may as well be “The Jump Scares.” Episode 3, with a spiked ceiling death trap and reliance on block pushing, could be renamed “Obtuse Puzzles.” Claire and Moira are often genuinely terrified of what’s happening around them, while Barry can’t resist making bad puns and quips that reference previous games. “Who’s the master of unlocking now?” he asks after destroying a door.

Revelations 2 just can’t let go of the good old days, when “Jill sandwiches” were on the menu, and fake human organs unlocked secret doorways. And again, that’s not necessarily bad. In fact, I’d wager some fans have longed to search for “Emblem Key” and throw their shoulders into chest-high obstacles.

Sadly, the game never executes or elevates these concepts to a particularly satisfying degree. Its barebones plot does more to set up a future installment and antagonist than provide an interesting conflict of its own, its monster designs and puzzles sometimes feel copy-pasted from previous games, and the co-op gameplay does little to change the experience (and when it does, it’s generally for the worse). The dungeon-like Raid Mode, where players continually loot stronger and stronger enemies for better and better guns makes for a good, repeatable challenge, but still feels ancillary to the main event.

Revelations 2 is neither a particularly good game nor a particularly bad one. It has all the ingredients of a good Resident Evil game, but lacks substance. Viewed as a setup for what’s to come, it’s bearable. Viewed as its own game, it’s underwhelming. An Issue #0 if I ever saw one.

This game was reviewed on an Xbox One using a code provided by Capcom.

Topics
The Legend of Zelda: Tears of the Kingdom: release date, trailers, rating, and more
CES 2023: Gran Turismo 7 is coming to PS VR2 as a launch game
Destiny 2: Where is Xur for the weekend of December 30
Chimera MW2: How to unlock the Chimera and best loadout
How to cheat in Words With Friends
Shoulders of Giants brings mascot-era nostalgia to the roguelite genre
The best PSVR games for 2023
Like a Dragon: Ishin’s Trooper Cards are full of cameos, including Rahul Kohli
How to romance characters in Fire Emblem Engage
How to eliminate enemies with no ranged weapons in Fortnite
Fire Emblem Engage gift guide: every character’s favorite gifts
Call of Duty: Warzone 2.0 Season 2 will finally fix its looting system
The best capture cards for 2023: Xbox, PlayStation, and PC