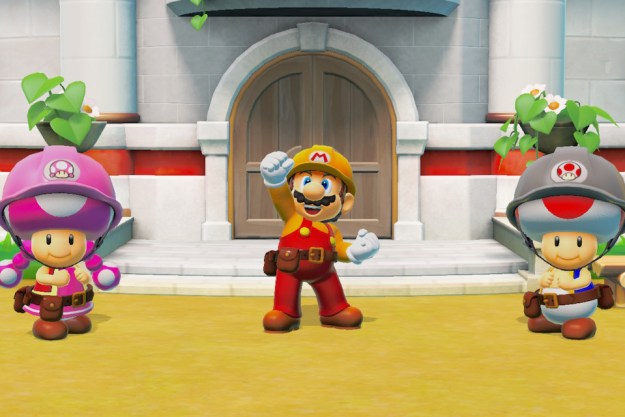 “Highly engaging whether you want to create levels or not, Super Mario Maker 2 is utterly fantastic.”

Endless possibilities. That’s Super Mario Maker 2 in a nutshell. For a game ostensibly centered around creation, Super Mario Maker 2’s appeal goes much further than the limits of your own imagination. Yes, the sequel to the Wii U hit improves the level creation suite in just about every way, but you don’t need to be interested in game design at all to have a rockin’ time with Super Mario Maker 2. The robust Story Mode is worth the price of admission alone, and the massive and constantly growing library of levels created by players around the world could keep you busy forever. Well, at least until Nintendo makes a third entry to the series.

Story Mode kicks off after Undo Dog gets a little too rambunctious and presses the reset button, completely obliterating Princess Peach’s castle. Mario plays the hero once again, and he’ll have to do more than just fix the plumbing. He has to earn coins to rebuild the entire castle, and he’ll do it by completing jobs (another word for levels) handed out by Toad.

Over the course of 100-plus jobs, Story Mode both shines and surprises. Rather than being confined to traditional 2D Mario progression with worlds and themes, Story Mode jumps around across all five game styles. What’s more astonishing, however, is how risky it feels.

Nintendo embraces chaos in its Story Mode, designing levels that have a markedly different feel than the levels from mainline Mario games. Story Mode levels generally have more “stuff” packed inside, more moving parts, than you’d expect. And it works exceedingly well.

Those who played Super Mario Maker are well aware of the diabolical tracks created by random users, but it’s ridiculously cool to play levels created by Nintendo developers using the very same tools that you and I get in the package.

Over the course of 100-plus levels, Story Mode shines and surprises.

These jobs vary in difficulty — marked one to four stars — and each one feels positively unique. In one early level, Nintendo set a clear condition — objectives that must be completed before reaching the goal — that bans Mario from leaving the ground. This initially seemed nearly impossible to achieve, but after some clever manipulation of platforms and enemies, I was able to do it.

Another level used the Koopa Clown Car, turning Super Mario Maker 2 into an action game as I spewed fireballs at the barrage of enemies and destructible obstacles in my way. Other novel levels gave me some design ideas that I would never have thought of otherwise, particularly when it came to levels solely focused on puzzle-solving.

These task you with guiding enemies through a room using On/Off switches. If you’re successful, then you get a key and progress to the next room. While these levels largely removed the platforming element Super Mario games are known for, it still felt authentic to the series.

There are still levels that feel as if they could be in a mainline Mario game, but most feature the kind of off-kilter chaos that is distinct to the Super Mario Maker games. Story Mode may not have an overworld like other Mario games, but it makes up for it with levels that are thoroughly impressive, challenging, and most importantly, incredibly fun.

If you build it…

But how does Super Mario Maker 2 fare as a game design tool? After all, that’s the point of the experience: The ability to create and play your own Super Mario levels. Unsurprisingly, the level design suite is intuitive, feature-rich, and includes a variety of new bells and whistles to work with.

Elements are separated into categories and placed on easy-to-navigate wheels. A taskbar at the top of the screen displays commonly used elements for the style and theme. As you drag and drop pieces into your level, the most recently used elements can be easily selected from the top, and you can even pin elements. Meanwhile, the left side of the screen harbors other variables such as the time limit, style, and theme.

After adding a new element to your level, you can quickly test it to see what works. The snappiness of the creator actively encourages experimentation. While it doesn’t hold your hand throughout the level creation process, Nintendo has once again created an inviting design toolkit that will appeal to both complete beginners and seasoned designers.

The level design suite is intuitive and feature-rich.

My favorite new feature is the ability to add Clear Conditions. As I mentioned before, these are objectives that must be completed before reaching the goal, and can be as simple as killing a dozen Goombas or grabbing 100 coins. They can also be peculiar like the aforementioned no jumping condition. Setting Clear Conditions can completely change the dynamic of a level and dramatically expands the number of level types you can create.

Nintendo made sure to include design options that were strangely absent for the launch of the original on Wii U, including checkpoint flags. Mario Maker 2 also has slopes, something that the original never had.

With so many design tools, styles, and layout themes, creating levels can be daunting at first. Nintendo has included a well-made tutorial in Super Mario Maker 2 that covers everything from the basics of using the suite to advanced concepts like the philosophy of good level design.

After creating a level, it’s a quick process to upload it to the online servers. Well, it’s quick if you didn’t make a torturous level, because you do have to complete it yourself for verification. Give it a snappy name, add a brief description, and choose two tags (speedrun, standard, puzzle-solving, etc.) and a course ID is generated. Then you can bravely share that course ID with friends, family, and the always nice people of Twitter so others can play your creation.

While you can create levels in local co-op with another player, I found tag team level creation to be cumbersome and annoying. Basically, it slows down the process and generally feels like more hassle than it’s worth.

Despite that, Nintendo has handed Mario fans a treasure trove of creation tools to tinker with and create the Mario levels that previously only lived in our heads. Whether or not you can create something that is genuinely good depends on the amount of time you’re willing to put in, but it’s all here at your disposal in an accessible package.

Let’s be honest: Not everyone wants to design a bunch of levels. And even if you are an avid designer, you’ll probably want to take a breather to check out the goods on Course World — Mario Maker 2’s online hub. Course World is where you can check out user-created levels and play both local and online multiplayer. The online component isn’t as impressive as many other modern games, but it gets the job done.

You can create or use a pre-existing Nintendo avatar (basically a Mii) and choose a unique username. You can outfit your avatar with various clothing items, but it doesn’t go much deeper than that. You can like/dislike and comment on each course you play, and worldwide leaderboards track Maker points, cleared courses, and versus standings.

The online component isn’t as impressive as many other modern games, but it gets the job done.

To start off, you can easily view the most popular courses and search by tags for individual courses that have what you’re looking for. Even if you just hang out in the popular course filter, you can enjoy dozens upon dozens of excellent offerings at any time. Some of the levels that are currently leading the pack are simply incredible.

The online multiplayer, both versus and co-op, feels like the weakest aspect of Mario Maker 2. In versus, it’s simply a race to the finish. While fun and full of pandemonium, I experienced lag in just about every versus match I’ve played thus far. It’s cool to go toe-to-toe with three other Mario aficionados in a classic platforming race, but I hope Nintendo smooths out the experience.

Co-op feels carelessly thrown in because most courses I played weren’t designed with multiple people working together in mind. Unlike versus where it’s survival of the fittest, co-op chaos doesn’t really seem to have a point. It can make grueling levels easier simply because only one person needs to reach the goal, but that’s not really a true co-op experience.

I’m sure creators will start coming up with and sharing interesting co-op designs, but as of now co-op is a forgettable feature, especially since you can only play online via matchmaking. Unfortunately, this is where you’ll find another shortcoming of Super Mario Maker 2. Presently, you cannot play online multiplayer with friends, which seems like a large oversight for a game with online multiplayer. Nintendo has confirmed, however, that this feature will be added in later in an update.

Local multiplayer with multiple Nintendo Switch consoles is also an option in Course World. So you and your friends can enjoy the whole suite of levels, provided you each have your own Switch console. Local co-op on one console is more limited, it seems. You can play your creations and downloaded courses in a separate menu (Coursebot) with up to three friends but only cooperatively.

Online multiplayer has never been Nintendo’s area of expertise. Super Mario Maker 2 doesn’t change that narrative, but it does include the essentials. Course World’s most important function is as a perpetually growing database of side-scrolling Mario levels. It succeeds in that respect.

Super Mario Maker 2 is the best of both worlds. For creative-minded players, the level design suite is robust and includes a number of excellent new features to make an even greater variety of courses. For those who just want to play, Super Mario Maker 2 has an excellent campaign filled with 100-plus Nintendo-designed levels — not to mention the constantly growing library of user-created levels. The online multiplayer isn’t feature-rich, but it doesn’t stop Mario Maker 2 from joining the lineup of top-tier Nintendo Switch games.

No, there’s nothing like Super Mario Maker 2 outside of the original, and the sequel is far superior.

It took me about six hours to complete Story Mode, but that’s just scratching the surface of content this game has to offer. With the indefinite number of user-created levels in the Course Hub, Super Mario Maker 2 could entertain you for the rest of the Nintendo Switch’s lifecycle.

Yes, Super Mario Maker 2 is one of the best games on the Switch.