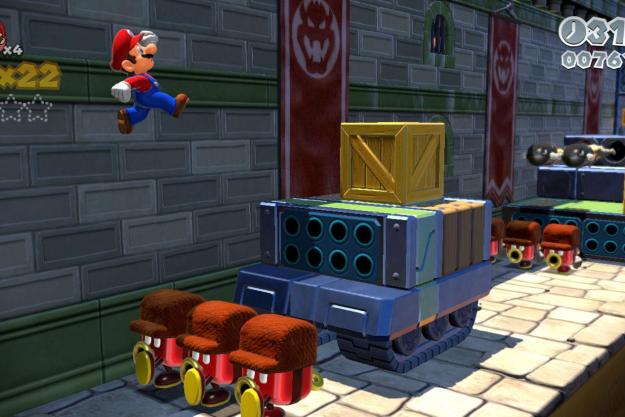 “Super Mario 3D World is the missing link between 2D and 3D Mario games and is chock full of more fresh ideas than we’ve seen from Nintendo in some time. If you own a Wii U, you owe it to yourself to pick this one up.”

The Wii U has been out an entire year, but it feels like we’re only now getting some games to play. Following in the footsteps of Wind Waker HD and Pikmin 3, Super Mario 3D World is Nintendo’s latest attempt to drum up some interest in its next-gen competitor to the PlayStation 4 and Xbox One. It’s a successful bid, too. Mario 3D World is a full-fledged sequel to Super Mario 3D Land for 3DS, and it’s one of the best Mario games we’ve ever played.

The goal of 3D Land and now 3D World is to merge the exploration of latter-day Mario console games with the frantic fun of the earlier sidescrollers. Nintendo’s Tokyo team (which made the Mario Galaxy titles) hopes to teach people how to enjoy 3D Mario games while also satisfying longtime fans, the ones who have kept up with the series for 25 years.

Here’s the general idea: Instead of a purely 3D world with a moveable camera and stars to search out, Nintendo has the camera locked at fixed angles You can still move it around, but you don’t have to. It usually stays at a fixed distance from Mario, which gives the game more of a 2D feel. Levels follow the old model too, with time limits returning to encourage players to race through to the finish instead of simply star-hunting. The levels are broken into short sections connected by pipes and cannons, and they always end with that familiar flagpole at the end.

Instead of entering a level to search for a new star mission, you enter levels and try to race to the finish like classic Mario games.

You can play as Mario, Luigi, Princess Peach, Toad – each with unique abilities inspired by their appearance in Super Mario Bros. 2 – or all four if you have some friends in the room. Like Mario Bros. Wii, you and your friends can spend as much time trying to kill each other as working together. It’s a delicate balance between friendly griefing and sharing a team victory, though whoever gets to the flag pole first gets the most points. It never stops being a competition. Our only problem with multiplayer was the camera, which had trouble tracking four people at once.

Mario’s jumping and running abilities are mostly unchanged. Instead of simply picking up speed, fire and smoke come from you once you begin to run. Most other special jumps, like the long lump, side twirl, and butt stomp are still here, but Mario can’t do his trademark 3-stage running super jump anymore, which is a shame. Luigi jumps higher but moves more slowly, Peach can float for a few seconds at the height of her jump, and Toad is a speedster.

Off the beaten path

The overworld feels like a merging of Super Mario Galaxy and Super Mario Bros. 3. Like SMB3, you’re fighting through kingdoms of snow, desert, cloud, lava, and others. Though paths still open between levels and you have to beat them in order (mostly), you can also walk around the overworld freely and find secrets tucked away there. Imagine if you could step outside the lines connecting each level in SMB3. That’s how it works here.

The overworld kingdoms all follow a particular theme, but the levels themselves don’t – they’re just random fun, like a down-to-earth Mario Galaxy. Sure, there were a few more lava levels in the lava kingdom, and a couple more cloud-like levels in the cloud kingdom, but for the most part, each level is its own unique treat. That’s part of what keeps Super Mario 3D World from getting stale.

Nintendo isn’t afraid to break the integrity of its own game for the sake of a little fun. Every level is littered with new ideas and different types of challenges, from 3D puzzles (where you can’t jump) with Toad, to a Mario Kart homage, to several levels that may remind you of Zelda. New things constantly pop up. And if you fail five times in a row, the game gives you invincibility to help you. For all of the challenges you face, there are also plenty of pillows to absorb your failures so you don’t get too frustrated. Even better, most of these helping hands are optional.

Cats, cherries, and other powers

Items and power ups add greatly to this variety. The most powerful new ability is Meneki-Neko, or “Lucky Cat” Mario, which lets you climb up walls (to an extent), run on all fours, and swipe at enemies. The Double Cherry power is the other new one; grab the power-up and a Mario clone appears next to the original, with the two moving in unison. Grab another of these power-ups and a third clone appears. Add another for a fourth. It’s easy to control an army of Marios since they copy each other’s movements, but it gets really tough to keep track of them.

Nintendo isn’t afraid to break the integrity of its own game for the sake of a little fun.

More familiar power ups like the Fire Flower, Mega Mushroom, Boomerang cap, and the Tanooki suit are also present, but you can pick up and use many temporary power ups, too. In one level we got to hold a potted piranha plant, which would eat every enemy we got close to, and in another, there’s a giant skating boot you can jump into, which feels like a clever homage to Mario Bros. 3. You wear other odd things from time to time as well, like Goomba suits and Question Blocks.

Veteran players, and those that like to explore, have something to do too. There are hidden collectibles in each level, including three Green Stars (much like the large golden coins of previous game). Sometimes these are just lying around, but often it takes some effort to find them all. Though the goal is to beat every level quickly and move on, 3D World does force you to collect enough of these Green Stars to enter each kingdom’s boss castle. If you’re slouching off, you’ll have to replay a few levels to get some green. It takes 130 Green Stars to get into Bowser’s final castle.

As usual, the reason why you want to fight Bowser is explained quickly and with little fanfare. The Mario gang has to rescue six Sprixie Princesses because Bowser has trapped them each in little bottles. It’s not exactly Shakespeare, but if we quit playing Mario because the storylines were stupid, we wouldn’t have beaten the first game.

We do have one last gripe: because this game uses 3D environments and the Mario series is full of flat colors, we sometimes had a tough time placing our jumps right. More so even than in older 3D Mario game. This could be a product of the new approach taken with the camera; it didn’t break the game for us, but it created needless frustration on more than one occasion.

Though it’s mostly refining and sharing the ideas Nintendo came up with in Super Mario 3D Land, Super Mario 3D World is still packed with inspired ideas. Nintendo has been letting new, younger dev teams direct and contribute to Mario in recent years and you can feel their youthful enthusiasm when you play the game. One of the goals for the team was to bring back the magic that they felt when they played Super Mario Bros. 3 when they were young. We’re not sure if it’s there in 3D World, but this remains one of the best Super Mario games yet.