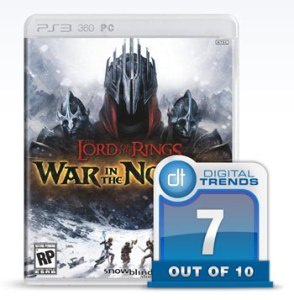 Peter Jackson’s Lord of the Rings trilogy may be the best book-to-movie adaptations ever made. It helped redefine the fantasy genre, and it’s hard to believe that The Fellowship of the Ring is 10 years old now. Luckily, the series has a timeless feel to it and with the first half of a massive two-part Hobbit film headed for release in late 2012, the franchise is already beginning to heat up again. At least, that’s what Warner Bros. is banking on. The Lord of the Rings: War in the North is an attempt to stretch out the fabric of Peter Jackson’s film trilogy by fabricating a massive, concurrent side quest onto it. More importantly though, it’s an attempt to bring back cooperative hack and slash gameplay with the added value of some light RPG and story elements. Does the approach work? Well, kind of.

Hack and slash to your brain

At its core, War in the North is a cooperative multiplayer hack and slash game. Like the old Gauntlet games, it’s best played simultaneously, in this case with three people. You can play by yourself or with one friend via splitscreen, but the computer will control any characters you don’t, and it’s not always great at knowing what to do…or how to kill.

The controls are pretty simple. Moving and the camera are controlled by the left and right control sticks . Other than moving, you’ll pretty much be hitting the X button (on the 360), which attacks. Just tap that baby over and over until your enemy is almost dead. To finish him off, use Y for a slow and powerful final blow. For far away enemies, hold the left trigger to go into first-person POV and aim your bow or magic staff. That’s it. You can shoot or slash. You know the whole game now. There are a few powerups and other controls mapped to different keys, but these are your core controls.

The controls work well enough, but, as you’d imagine, there is no depth to them. Just walk toward something and start hacking away. And don’t expect enemies to be any more complex. Your villains will shoot at you or come hit you. The bigger they are, the more hits it will take to bring them down. That’s it. There are no unique strategies needed to fight different enemies. They just pop up and you try as hard as you can to hit them before they hit you. This is a bit disappointing.

When I was battling a giant troll in the game, I remembered fighting similar creatures in Resident Evil 4. Unlike War in the North, each boss and enemy in RE4 required its own unique strategy and had its own learning curve. Defeating the troll required precise timing and was truly frightening. A troll in War of the North simply drops into the arena and awkwardly starts fighting people. To kill him, you fight him like an enemy in World of Warcraft: just keep beating him until he awkwardly collapses. This is the drill in War in the North. Don’t expect a mental challenge.

The RPG that wasn’t

There are three playable character classes and some RPG elements here, but they’re mostly negligible. Actually, after playing all three character classes, I can say that there is almost no difference between a ranger, an elf mage, and a dwarf champion. They all have the same basic ranged and melee attacks. The elf is the most different but only because she can cast a nice healing bubble spell. Leveling up and equipment changes are also a part of the mix, but neither affect gameplay much. It is fun to play through early areas after you’ve leveled up though–the orcs die so quickly. Don’t buy this game because you heard its an RPG. It’s not. But it does have some light RPG elements and they’re implemented fairly well.

A hacked and slashed story

Much like the classic Star Wars: Shadows of the Empire (N64), War in the North is an attempt to breathe new life into the Lord of the Rings films by weaving a secondary tale  into the fabric of Peter Jackson’s trilogy. The game is based on a single quote from Gandalf the White taken from the books that says, “With his far reaching right hand Sauron might have done great evil in the North. Yet all that has been averted because a handful of heroes stood in his path.” But beyond the general nature of the quote, so far as I can tell, none of the new specific story elements in this game appear in any Tolkien book, meaning nothing here is cannon at all.

Instead, it’s an attempt to recreate Lord of the Rings without repeating the same old story we’ve been through in previous games. For proof, look no further than the game’s three main characters: Eradon, a Dunadan Ranger like Aragorn; Andriel, a female version of Legolas; and Farin, a dwarf that looks just like Gimli. Apparently, these races form trios all the time. Their mission is to defeat Agandaur, a new villain that is of the same descent as the Mouth of Sauron and is one of the dark lord’s top lieutenants. By defeating him, they can help Frodo on his quest to destroy the Ring.

And that’s pretty much the whole story. Shadows of the Empire, which stars a Han Solo rippoff named Dash Rendar and largely takes place between The Empire Strikes Back and Return of the Jedi, has a complex and interesting plot that adds layers of depth to the Star Wars trilogy. War in the North adds nothing to Lord of the Rings. Despite a deceivingly large amount of dialogue and cutscenes, the plot of War in the North is pretty much an R-rated version of Super Mario Bros. You have to defeat Agandaur, but when you’re about to beat him, he runs away and you have to go find him in another castle. Inbetween encounters, the trio runs around killing a lot of orcs, undead, and trolls, among other things. Along the way you encounter familiar Lord of the Rings locations like Rivendell and talk to most of the central characters of the movies, but it’s all one big silly attempt to make you think what you’re doing has some impact on the events of the One Ring. It doesn’t.

There is a lot of material Snowblind could have mined from Tolkein’s The Silmarillion and many appendices. It is likely that the team only had the rights to use characters and locations from the Lord of the Rings movies though, as its doubtful that Warner Bros. owns the rights to any other parts of Tolkien’s mythos. As it stands, the story is quite lame and merely finds reasons for you to keep fighting orcs in new locations. Take that for what you will.

The visuals of War in the North are fairly impressive. The art team at Snowblind Studios did a wonderful job recreating the style and art direction of Peter Jackson’s Lord of the Rings trilogy. Characters and creatures look exactly like they do in the movies and new characters like Agandaur retain the style of Jackson’s work quite well. Environments are well done too. It’s fun to see how castles that the orcs take over are full of rusted metal. The only areas where the game’s art is a bit generic are where it diverges from Jackson’s trilogy. The levels featuring the undead tombs and cemeteries aren’t overly impressive.

But while Snowblind is good at emulating the work of Jackson’s Weta workshop, the imitation is fairly lifeless. The whole game has that shiny Xbox look to it made famous by games like The Elder Scrolls IV: Oblivion. The levels are almost entirely linear and packed full of invisible walls. Since you can’t jump over anything, you’ll be stuck running into everything. Even a stick on the ground can stop you cold, as can friendly characters. There are no diverging paths in most levels and nothing to see or explore. Land exists to give you something to do inbetween battles–nothing more.

But while the art design is good, the animation could be better. Interactions with classic characters like Bilbo Baggins are hampered by poor facial animation. Oddly, a talking eagle is the most emotive character in the game. He’s also the best voice actor. None of the cast of LotR lends their voice to the game. Instead we get imitations which range from serviceable (Gandalf) to noticeably bad (Gimli).

Enemy animations are smooth at times, and horribly awkward and out of place at others. Often full 1-3 second animations will play out when an enemy dies or is stunned, all while you continue to pummel away at him. Some of the deaths are so elaborate, it’s hard to know if a stumbling enemy is going to die or regain his footing and come to attack. The result is that you hit enemies more often and longer than you should. I don’t believe the hit detection in this game is far off, but the animations will fool you here and there. This is especially annoying when you’re fighting a troll.

Play this game with friends, or not at all. There are a lot of issues with Lord of the Rings: War in the North, but many of them are forgotten when you and one or two buddies start taking out hordes of orc together. The game is inconsistent and incredibly punishing at times, and all three of you will die from time to time and there won’t be a good reason for it. But the spirit of camaraderie is strong. There aren’t enough games out there that let you cooperatively play with three people at once. For that reason alone, you may want to check this game out. It’s not going to rock your world, but it should offer the enjoyment of a good round of Gauntlet Legends. If you’re playing alone though, you may want to steer clear of this one. There just isn’t enough depth to justify the purchase.

The best Lord of the Rings games of all time