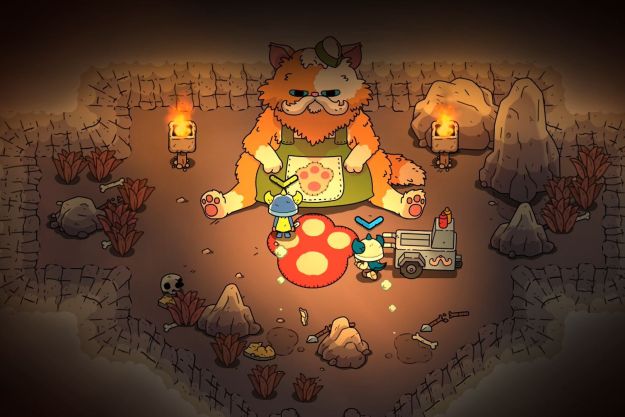 ‘The Swords of Ditto’: Our First Take

“'The Swords of Ditto' is a promising rogue-lite that weaves victory and death into a single epic tale.”

The Legend of Zelda: Breath of the Wild is an incredible game, and is sure to prove hugely influential. Yet it’s not a game that can be approached casually. Its massive commitment demands at least forty hours of the player’s time, and that time must be spent alone, as there’s no co-op or multiplayer available.

The Swords of Ditto, developer Onebitbeyond’s debut game, feels like a direct response to that isolation. It tells a tale that’s broken into smaller, more approachable chunks, which it achieves through an unexpected approach – expanding the scope. This isn’t a game about one hero’s fight against an incarnation of evil. It’s about a lineage of heroism rising to fight against evil time and time again. Oh – and you can bring a friend, thanks to drop-in co-op.

Though the story sounds dark, The Swords of Ditto takes a light-hearted approach that’s instantly conveyed by its style. Its world is bright and cartoonish, even when it’s pummeling you to death. While the look isn’t entirely unique, it does stand out against the hoard of pixel-art indies currently available or in development, and its executed well. Animations look superb and the bright color palette can alert you to danger.

Swords is a “rogue-lite”; death is permanent, and monsters are unforgiving.

And there’s plenty of danger. Swords is a “rogue-lite,” which means death is permanent, and monsters are unforgiving. However, dying doesn’t mean you start from scratch. The essence of your hero, which inhabits many people throughout the game, progresses from era to era. Defeating the evil means victory for the good guys, and the randomly-generated world will progress through a golden age until you (and the ancient evil) awaken again. If you die, evil wins, and the world falls into an age of darkness.

Your success or failure is most heavily felt in the island of Ditto’s largest village. As the world progresses, so too will the village – or not, if you fail repeatedly. The town can only thrive if evil is defeated. You’ll also receive experience as you play, so failure doesn’t completely stall the game. Banishing evil forever is the ultimate goal, though developer declined to tease how that happens, or how long it will take.

It’s good that player experience is retained between games, because you’re going to die, and most players will die a lot. We saw an impressive variety of enemies in our demo, which lasted about 15 minutes, and most offered a quick death the moment we let down our guard.

Every enemy has its own gimmick. Foes that look like rocks can’t be hurt directly, but will stun themselves after an attack. Poison blobs are invulnerable to all except fire. Skeletons with shields can’t be attacked hands-on. We over a half-dozen enemies in our short demo including one big, furry boss.

The combat, like the setting, feels inspired by Breath of the Wild. The environment and enemies are subject to three different elements; poison, fire, and etherium — a sort of magic ice. Objects that you’d expect to be flammable will catch fire, and poison can propagate to various enemies (or allies) over an area. The environment is not as dynamic as the last Zelda, but it offers a similar sense of discovery.

That’s aided by the game’s many gadgets, which are found at random throughout the world. They can range from something simple, like a torch, to something bizarre, light a giant foot that comes crashing out of the sky to stomp opponents. Gadgets often react to game’s elements and lead to surprising tactics. One of our gadgets, a record disc used like a throwing star, turned into a ball of spinning fire when thrown through a brazier.

As mentioned, The Swords of Ditto supports co-op, and the developers have put a lot of thought into how it plays with a pair. None of the puzzles require two players, but the world’s dynamic elements encourage cooperative problem solving – and it is possible to screw over your buddy if you mess up.

Death is also handled well. Each player can revive the other, but only by giving them a hug, which transfers half the surviving player’s health. That ensures no one feels left out, yet retains a penalty for defeat.

We frankly hadn’t heard of The Swords of Ditto before we sat down to play it, but we put it on our watch list the moment we stepped away from the demo. It’s a charming yet challenging game that offers bite-sized chunks of gameplay, yet ties everything into an epic struggle between good and evil, and its inclusion of co-op is a wonderful bonus for players tired of adventuring alone.

The Swords of Ditto is on track to launch in 2018 on PC and PlayStation 4.

Topics
The best PS5 games for 2023
The best games on Netflix Games
The best games on PlayStation Plus, Extra, and Premium
State of Decay 3: release date, trailer, news, and more
Best Gaming PC Deals: Save on RTX 3070, 3080, 3090 PCs
The best video game remakes reinvent the classics, they don’t just revisit them
Best Buy will give you a $10 to pre-order Hogwarts Legacy today
Save $620 on this Lenovo gaming laptop with an RTX 3070
AMD vs. Intel: which wins in 2023?
Forspoken settings: change these settings for a better experience
Add 2TB of storage to your PS5 with an SSD and save $70 with this deal
Fall Out Boy concert in Fortnite: start time, island code, and more
Marvel Snap is dangerously close to becoming a pay-to-win game