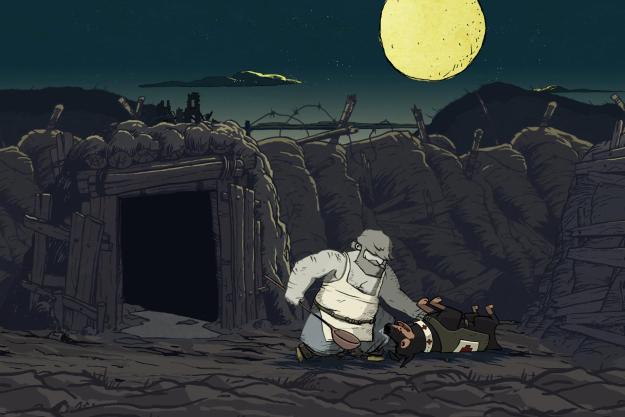 “Valiant Hearts: The Great War doesn’t do enough with its puzzle-solving gameplay or its story to make the trip worthwhile.”

When Kirk Douglas marches out in front of a firing squad at the end of Stanley Kubrick’s 1957 World War I film, Paths of Glory, there’s meaning in that moment. Kubrick’s anti-war screed builds to a heartbreaking climax that makes a powerful statement on the inevitability of injustice during wartime. It’s a lofty reach, but it works. Kubrick was a master storyteller, after all.

Ubisoft Montpellier’s Valiant Hearts: The Great War tells a WWI story too, its inspiration seeded by letters from actual soldiers that fought in the trenches. It’s a plot-driven puzzler that shares with Kubrick’s film a relatively action-free, inwardly focused take on The Great War, as well as an innate beauty, powered here by the same UbiArt Framework that breathed cartoon life into Montpellier’s two Rayman games. Looking good so far, right?

A story-minded puzzle game should challenge the player to really think about how a scene is constructed. What’s significant about this space? How do these different items of interest connect in a way that solves a problem? Those questions are asked in Valiant Hearts, but the 2D sidescroller dumbs them down in a way that makes the answers obvious. The way ahead is barred, the way back is blocked, and there’s nothing other than a pile of grenades you can interact with. So what needs to blow up?

Time and again, this is the sum total of Valiant Hearts‘ approach to puzzle-solving: Find the one thing in the surrounding area that you can interact with, and do so.

Make no mistake, there are flashes of brilliance. The talents that Ubi Montpellier flexed in Raymen Origins and Legends are evident, particularly in the final third of this game. The last gauntlet of puzzles is mentally taxing, to the point that some players may resort to using the handy but mostly unnecessary hints feature. Left-to-right driving sequences also inject some excitement, a little bit of reflex-dependent arcade play in which you dodge mines, falling bombs, and pursuing tanks.

It’s just too little, too late. The first three hours of this four-to-five hour game offer little more than rote puzzle-solving. The most challenging moments arise as a product of the game not communicating its intentions clearly enough. The very first puzzle is meant to be a snap, just a quick brain-teaser that introduces basic mechanics, but the lack of tutorial prompts makes it needlessly confusing.

You’re at a train station during the run-up to war, and a gang of Frenchmen is bullying Freddie, an American soldier who plays a significant role in the story. Shooing away half of the gang is easy enough; you simply pull a chain dangling from the train to shower them in a jet of steam. It seems that you’ve got to do the same with the second group, since they’re situated just beneath another steam pipe, but the pullchain is up in the conductor’s booth, a seemingly inaccessible location.

Freddie is on the far left end of the space, near the front of the train. As you explore to the right, you discover an inexhaustible supply of throwable red wine bottles packed into a crate and a French soldier drinking from a bottle of white wine. Further to the right, another soldier bars the way to the rear of the train.

The first instinct is to start chucking bottles, since there’s this very obvious crate situated directly beneath the apparent goal. Only that doesn’t work. In truth, the crate of red wine is a red herring. If you happen to press A (on an Xbox 360 controller) next to the soldier at the rear of the train – there’s no prompt for it – a thought bubble pops up with a picture of the white wine bottle. Grabbing it from the other soldier and handing it off clears the way to solving the rest of the puzzle.

The issue here isn’t just the lack of teaching prompts, nor is it even the confusing crate placement that turns out to be a misdirection. If the rest of Valiant Hearts were so clever at toying with the player’s expectations, that would be something. It’s not though. Later puzzles demand more elaborate solutions, but that’s usually because they’re laid out across larger environments. The train station – and a handful of other puzzles like it – is frustratingly obtuse, due more to uneven design and unclear signposting than intentional challenge.

It’s a shame, as the final chunk of Valiant Hearts successfully leaves behind the dull, occasionally frustrating early hours. Puzzles are built around multi-stage solutions that require sharp thinking and careful exploration. You might need to fix your broken-down car with a tire that’s very obviously out in the open, but you can’t get your hands on it until you’ve fooled your way past multiple guard positions using stolen uniforms. Even those puzzles are relatively straightforward, with very little in the way of misdirection to throw you off, but at least they’re more involved.

Valiant Hearts also suffers from an emotional disconnect on the story side. The game ostensibly follows the intersecting lives of a handful of characters during World War I, but the pathos is lacking. Blame it on the documentary-style narration and Simlish-ish dialogue. The story maintains an unnecessary distance between the player and the characters for the bulk of the game. You’re left with little more than a parade of facts; this happened, then this happened, then this… and so forth.

As with the puzzles, it all starts to come together once you reach that final stretch, but the damage is already done. Without any prior investment in these characters, the inevitable bittersweet conclusion feels neither bitter nor sweet. It’s just more of the same recounting. Tinged slightly with emotional resonance, perhaps, but not on a level that befits a war story about lost love and sacrifice.

At least the facts are dead on. Valiant Hearts peppers you constantly with unlockable info sheets, accessible from the pause menu, that go into detail on World War I’s battle theaters. Colorized photos from the early 20th century paint an even more complete picture, as do collectible mementos scattered throughout each new set of puzzles.

History buffs, and war history buffs in particular, can expect lots of reading and digital ephemera to dig through as a reward for pushing to the end of the game. For the rest of us, meh: Another quirky UbiArt game falls short.

Valiant Hearts: The Great War is an artful mess, but it’s a mess all the same. The endgame delivers on the promise of puzzle-solving gameplay set against the backdrop of World War I, but the interminable slog necessary to get to that good stuff isn’t the inspiring call to arms that it needs to be. There’s a solid game buried deep within Ubi Montpellier’s creation, but you’ll have to dig if you want to find it.

This game was reviewed on a first-gen Alienware X51 gaming PC using a code provided by Ubisoft.