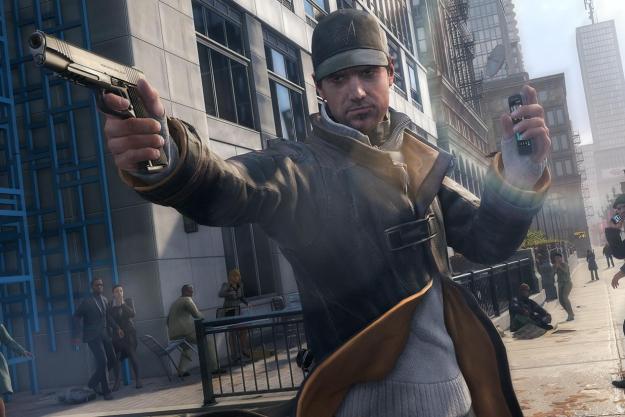 “Watch Dogs makes up for a snooze-worthy story with heaping amounts of smartly designed diversions scattered around its gorgeous open world.”

If Batman was a reponse to the increasingly dangerous world of the early 1940s, Watch Dogs protagonist Aiden Pearce is a modern-day outcry against a less and less private world.

The so-called Vigilante roaming near-future Chicago represents an empowered response to the privacy concerns we all grapple with today. He’s a walking, talking cellphone imbued with the ability to command anything made out of 1s and 0s. In becoming Pearce, we sort through our fears of unlawful exposure by taking control. Why worry about Big Brother when you can just steal his powers?

As it turns out, playing Big Brother can be a blast.

Why worry about Big Brother when you can just steal his powers?

At heart, Watch Dogs is an open-world action game that feels in some ways like the middle ground between Grand Theft Auto’s authenticity and Saints Row’s gratuitous lunacy. There’s a very faithful virtual recreation of Chicago here, filled with all manner of things to see and do. Sometimes you’re hacking into the city infrastructure in pursuit of Bad People, other times you’re causing mayhem at the helm of a freaking spider-tank.

The grounded side of Watch Dogs plays out primarily in the story missions, most of which are designed with a “play it your way” sort of attitude. Rarely do you feel funneled into tackling challenges in a particular way. The game gives you a goal and a set of tools to accomplish that goal. What happens from there is up to you.

Most games that offer multiple play styles typically boil down to asking the player a simple question: stealthy or bloody? Watch Dogs is no different, but there’s a lot of wiggle room between those two options. Aiden’s cellphone can hack into security cameras, and then remotely hack grenade-toting guards, other cameras, and an assortment of traps and distractions, either to thin out resistance for a frontal assault or direct attention away from a quiet intrusion point. You can stage an assault on a compound without ever setting foot inside, simply by hopping from camera to camera and hacking up some mayhem as you go.

The cellphone doesn’t reinvent the stealth vs. action divide; it’s merely an enhancement. A tool you can use to gather intel and turn the odds in your favor. For run-and-gun/duck-and-cover situations, you’ve got an opportunity to mold the field of battle in a way that suits you. Aiden’s magical mobile can create cover where there was none before and leave protected enemies suddenly exposed. He can use a conveniently placed security camera to peer behind a foe’s defenses and remotely blow up a control box that would otherwise be just out of sight.

Some of the on-foot action suffers from fiddly controls and an occasionally uncooperative camera that sees Aiden getting stuck on pieces of scenery, but no such issues plague the silky smooth, arcade-style driving. Whether you’re the pursuer or the pursued, car chases in Watch Dogs never fail to excite. Aiden’s cellular can change traffic lights, raise street blockers and bridges, disable helicopters, and more. Time it right – with the help of a handy HUD icon and audio cue – and you can end an edge-of-your-seat pursuit abruptly with an explosive multi-car pileup that would make Michael Bay proud.

The cellphone isn’t just a remote control for causing mischief; it’s also your portal into Watch Dogs‘ various diversions. The aforementioned spider-tank is one of four so-called “Digital Trips,” which amount to off-the-wall minigames, complete with their own dedicated skill trees. There’s also a coin-collecting alternate-reality game, and an elaborate progression map that rewards you with various unlocks for reaching an assortment of milestones. That’s on top of the gang hideouts, Fixer contracts, and criminal convoy missions, all scattered throughout the open world to create more opportunities for you to play the role of badass vigilante hacker.

Sometimes you’re hacking into the city infrastructure, other times you’re causing mayhem at the helm of a freaking spider-tank.

That’s the beauty of Watch Dogs: there’s always a shiny distraction teaching you to use the core mechanics in ways that you hadn’t considered before. Even the online play capitalizes on this. Joining the more traditional competitive modes are Hacking Contracts that allow you to enter another player’s game and steal their data. There are limits in place meant to keep these intrusions to a minimum, but they bring a dynamic element to your city wanderings that’s quite unlike anything we’ve seen in previous games of this sort.

With so many dangling carrots to reach for, Watch Dogs runs the risk of offering too much. It’s very easy to be distracted away from the story when you’re bouncing between giant flowers on a Psychedelic Digital Trip or solving each CtOS Tower’s environmental puzzle to reveal more of the city (think Assassin’s Creed’s Viewpoints). Even the simple act of walking along a sidewalk breeds distraction in the form of pop-up text (powered by Aiden’s cellphone) that glimpses into the lives of pedestrians. The sight of a man and woman hugging on a street corner takes on new, surprisingly impactful meaning when you learn that one was recently diagnosed with melanoma.

The lively city that surrounds Aiden is always full of joyful noise, and it serves Watch Dogs well. Every street corner brims with new opportunities. It’s all an illusion, of course, but it’s an extremely convincing one. Thankfully. Let the experience wash over you and you’ll have an easier time overlooking the empty vessel that is the ostensible heart of the narrative.

Watch Dogs is meant to be on origin story, but there’s a significant problem with that: unlike Batman, this Vigilante has no Bruce Wayne persona to help define him. He’s Aiden Pearce in-name-only.

There’s no emotional resonance to connect players with an unmasked Pearce. Here’s a guy whose questionable past actions inadvertently led to the death of his niece. His widowed sister and her son still live in Chicago, and Pearce flits around on the outskirts of their lives. He’s also got a colorful and ever-growing cast of associates. All the pieces are there for a relatable story, yet Pearce feels like a blank slate.

Blame the writing. Blame the monotone reading from Pearce voice actor Noam Jenkins. Blame the absence of small-yet-vital character moments that help paint a believable picture. All of these are issues, and they’re all to blame for Watch Dogs‘ narrative shortcomings. If we’re expected to spend 20+ hours in another person’s shoes (and wicked cool future-world trench coat), it’s worth taking the time to build reasons for us to give a crap.

Ubisoft Montreal establishes a strong origin here, but perhaps not in the way that was intended. It isn’t Aiden Pearce’s journey that ultimately matters; it’s your own. Sinister plots, lost loved ones, secret bunkers… none of it leaves the sort of lasting impact that you’ll get from a city-spanning police pursuit or a base infiltration staged entirely from your smartphone screen. In Watch Dogs, you are the badass behind the mask, empowered to act out against our increasingly automated world.

This game was reviewed on a PlayStation 4 using a disc provided by Ubisoft.