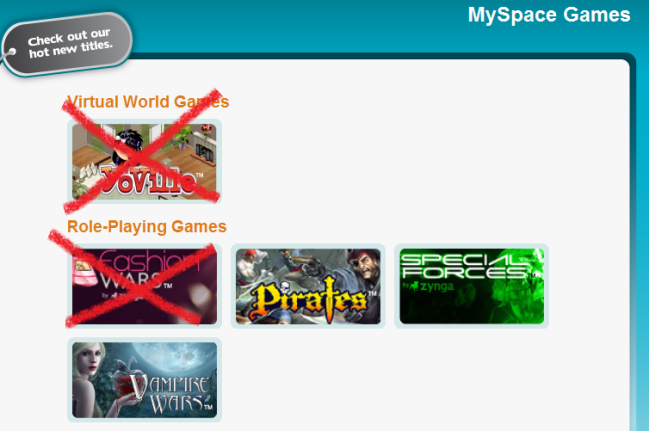 As MySpace’s imminent sale or spinoff continues, things are bound to get worse before they get better. According to TechCrunch, Zynga has trimmed a number of games formerly offered on the site, most notably the extremely addictive Mafia Wars. Users are now being greeted by this memo:

At least Zynga didn’t redirect users with something “Thanks for playing Mafia Wars on MySpace! Now get yourself over to Facebook like a normal person and keep up with your social gaming addictions!” The increasingly influential developer has also pulled Fashion Wars and YoVille, both of which are still listed on its site under MySpace games, but curiously link to Mob Wars. MySpace still includes Zynga titles Pirates, Special Forces, Vampire Wars, and Zynga Poker.

It’s a little sad, but completely unsurprising. MySpace’s demise is no secret, and with plummeting numbers of users and ever-rising expenses – oh, and its continuing sale process – the site isn’t a terrible popular platform for app developers.

But just to throw a twist in the whole thing is former MySpace CEO Chris DeWolfe’s latest series of acquisitions; the co-founder of MySpace, who is said to be mulling a bid on his brainchild, bought online game developer MindJolt last month. The New York Times reports that MindJolt itself has picked up two new game companies in the last week: Social Gaming Network and Hallpass Media. These acquisitions will add millions of users to MindJolt’s consumer base, users which could possibly transfer to a new, game-centric MySpace headed by its former CEO? Time will tell. Of course, even if DeWolfe manages to scoop of the remnants of MySpace and outfit it with MindJolt gaming apps, competing with the likes of Zynga’s and EA’s user base could prove impossible.

6 hidden PlayStation 5 settings you need to know about