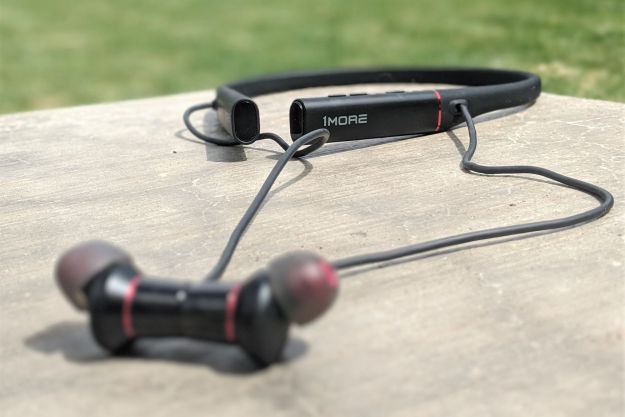 The sexy new trend in wearable audio these days are true wireless earbuds — and for good reason. When done right, they offer comfort and quality in a bite-sized package.

Still, 1More is living proof that a few wires here and there don’t have to be a bad thing. The company’s new $150 Dual Driver ANC Pro Wireless in-ear headphones, which launch May 21, may not have the instant appeal of a true wireless counterpart. But after spending time with them, it’s evident that 1More’s new, efficient headphones will get you where you need to go.

Allow me, for a moment, to gush over the packaging in which the Dual Driver ANC Pro Wireless arrive.

Essentially, the headphones sit in a display case that’s bound like a book, with artistic sketches of the headphones themselves on the inside cover. Competing companies, take note. This is how you make a good first impression.

Beneath the headphones, a smorgasbord of accessories is waiting. Among them are three sets of extra eartips, both a USB-C charging cable and an auxiliary cable, a carrying pouch for the headphones, and various documentation.

After taking the time to find the best-fitting tips for your ears, setup is standard compared to most wireless earbuds. The built-in Bluetooth 5 technology works well, at least based on the fact that I didn’t hit any snags in my time with them.

The 1More Music App pairs nicely with the headphones. You don’t need the app to connect initially, but I would recommend downloading it. The app provides access to firmware updates, control over active noise cancellation, and smart burn-in options. I’ll get to that last part a bit later.

Before I go any further, it’s time to address the elephant in the room … er, ear. From the way the Dual Driver ANC look, it’s clear to me that I would classify these as earbuds that just happen to be tethered to a neckband by a pair of wires. 1More, however, refers to their new product as in-ear headphones, so I’ll use that terminology throughout this review.

The in-ear component of the headphones fits comfortably and securely in my ears and hung in there rather nicely when I decided to audition them during a run around the local park. At the other end of the wire is the silicone neckband, which wraps gently around the neck. The band has buttons for power, volume control, active noise cancellation, and wind noise resistance mode, as well as the option to call upon your preferred voice assistant. They aren’t flashy, but I found them easy to use.

The back of the buds are magnetic, allowing them to clasp together and sit like a hi-res necklace when you’re not using them. That’s a nice design accommodation since the Dual Driver ANC don’t seem like the easiest headphones to stow and go with.

Don’t get me wrong, the neckband is flexible, and it looks like it could withstand some force. The carrying pouch just doesn’t give me as much confidence as, say, a more rigid case would when it’s mixed in with other items in a backpack or suitcase.

That brings me to what I see as an inevitable design flaw with this style of headphone — they just won’t have the portability or ergonomic footprint that so many people have come to enjoy with true wireless earbuds. There’s a lot the Dual Driver ANC can offer between their features, audio quality, and price point. You just have to be able to make do with something a little more prominent in order to enjoy those traits.

The previous model in this series of 1More headphones, the Dual Driver BT ANC, offered a paltry 7 hours of playback time for either calls or music. It was clearly a weak point, and it’s safe to say 1More addressed it.

The new Dual Driver ANC claim 20 hours of battery life without ANC and 15 hours with the feature turned on, as well as a quick-charge feature that enables 3 extra hours with just 10 minutes on the charger. After fully testing 1More’s battery life claims,  the specs hold up for a huge improvement.

The Dual Driver ANC have IPX5 waterproof resistance, giving them protection against jet streams of water from any direction. I  never got that intense with them, but the headphones did make it unscathed through many a rain-soaked walk.

In addition to their active noise cancellation capabilities, the Dual Driver ANC also have the previously mentioned wind noise resistance mode, which 1More says is designed to suppress the microphonics caused by wind and keep unwanted distractions out of your listening experience. It worked well during windy walks, with an interesting quirk. You have to choose between active noise cancellation or wind noise resistance mode – the two can’t be on simultaneously.

It makes sense to a certain degree, since both are essentially different forms of noise cancellation. But I’m not sure why anyone wouldn’t just use the regular ANC given that, from my experiences, the effects aren’t largely different from each other.

With products like its Triple Driver and Quad Driver in-ear headphones, as well its more recent 1More Stylish true wireless earbuds, 1More has established quite a reputation. In a nutshell, this is a company that delivers quality sound that doesn’t cost a fortune.

The Dual Driver ANC, then, have expectations to uphold. Based on my time with these in my ears (and around my neck), the returns are excellent.

These headphones have the name they do for a reason. They’re comprised of a 13.6mm dynamic driver with a titanium composite diaphragm, as well as 1More’s proprietary balanced armature. It’s saying a lot, but if this isn’t the Lennon and McCartney of headphone components, they sure come darn close.

In other words, name a better duo. I’ll wait.

Seriously, though, listening to the Dual Driver ANC has been quite an experience. In addition to support for audio codecs like SBC, AAC, and LDAC, they expertly navigate between genres of music, digging low for the vibrating rumbles of Lil Nas X’s Panini before climbing for a powerful rendition of Bill Withers’ Lean on Me. As with all the company’s products, the Dual Driver ANC were tuned by Luca Bignardi, a Grammy Award-winning sound engineer, and it shows.

If there’s an issue I have with the sound quality, it’s that I must wait before I can hear the best the Dual Driver ANC has to offer. The headphones’ app has a smart burn-in feature, which essentially plays tones and signals through your buds to “train” them, according to 1More. For the best performance, 1More suggests it could take anywhere from a few dozen to hundreds of hours of burning in to reach the optimum level. Call me impatient, but that just seems excessive.

The Dual Driver ANC employ hybrid active noise cancellation, where a pair of microphones in each bud analyze sounds both inside the ear and in the outside environment, then block the unwanted sounds out with the help of a dedicated digital signal processor (DSP). The headphones have two different levels of noise cancellation, mild and strong, that can be chosen with the neckband button or in the 1More Music app.

My trials with the ANC features of these headphones were good overall. White noise with the feature in action was minimal, and they generally did a solid job of dampening most outside noises. I would keep expectations realistic, though. They don’t approach the cancellation abilities that solid over-ear cans can offer, and some sounds will inevitably get through. That’s not really a knock on 1More, but rather a reminder of the limitations of this style of product. They do well within those constraints.

1More has built excellent, affordable listening devices time and time again in the past, and despite it being in a less popular package, they’ve done it again with the Dual Driver ANC Pro Wireless.

The current options for neckband-style products are a bit more limited than their true wireless counterparts. The $200 Jabra Elite 65e would be a comparable option, though the 1More have a clear advantage in battery life. If you want to save and stay in the family, the 1More Triple Driver offers similarly great sound, at the expense of ANC and battery power.

I am a little more cautious with wired products that could be prone to getting caught on various objects. But the Dual Driver ANC are well constructed, and should last as long as they’re properly cared for.

Yes. They’re sporting an aging design, and 1More teases you with the promise of better sound as long you’re game to potentially wait hundreds of hours. But the Dual Driver ANC sound great already, have battery life and ANC capabilities that you can’t find in most true wireless options. If you can deal with two dangling wires, buy the latest from 1More.

Topics
Klipsch follows the success of The Fives with The Sevens and Nines powered speakers
Marshall’s latest Bluetooth speaker has four drivers for 360 sound
The best waterproof Bluetooth speakers for 2023
The best OLED TVs for 2023: from LG, Sony, and Samsung
Super Bowl 2023 halftime show: who’s performing?
The best indoor TV antennas for 2023
The best VPN for streaming for 2023
Showtime is being merged into Paramount+
Sling is now 50% off — stream live sports without cable
Everything leaving Hulu in February 2023
Peacock does away with free tier for new subscribers
Is there a Sling TV free trial? Here’s what you need to know
What’s new on Apple TV+ this month (February 2023)