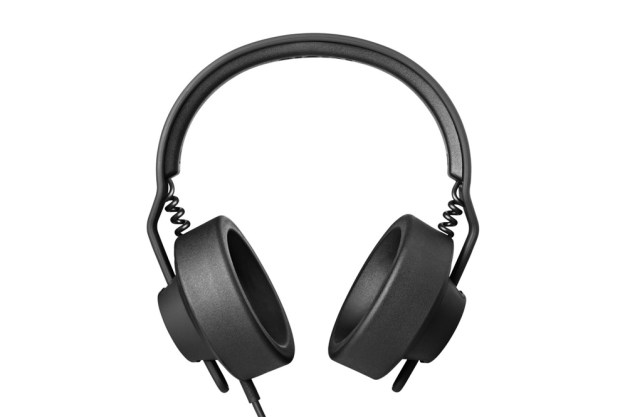 “Even if you aren’t in the market for a $250 headphone, the TMA-1 Studio are worth hearing for the sheer pleasure of the experience – and they just might convince you that investing a few extra bucks in a set of cans can pay huge dividends.”

Whatever makes Aiaiai tick, we had almost nothing but good things to say in last year’s review of its TMA-1 headphones, rating them a 9/10 and bestowing them with our Editor’s Choice award. We recently had a chance to check out its latest release, the TMA-1 Studio, a slightly higher-end incarnation built for on-the-go DJ/production use. There’s nothing we like better than more of a good thing, so we were excited to check out the TMA-1 Studio and see how the new design stacks up against the original TMA-1. Spoiler alert: We were not disappointed.

The Aiaiai TMA-1 Studio come in a sharp-looking, heavy-gauge cardboard box, carrying forward a premium packaging trend we’ve been seeing in today’s high-end headphones. Opening the magnetically fixed side-flap like a book exposes the TMA-1 Studio nestled in a corrugated foam cutout beneath a clear plastic cover. As we liberated the TMA-1 Studio from their foamy futon, we got our first glimpse of their new foam earcups, which look a little like cup holders pulled from a German sports sedan.

Underneath the headphones we found a compartment of accessories including: one removable DJ-style, coiled cable (with locking connection), a black zippered carrying bag, a gold ¼-inch (TRS) adapter, and an alternate set of earpads made of protein leather. The only accessory we felt these headphones should have included was an extra cable with an iOS-compatible 3-button control piece – standard fare with most high-end sets these days. We should note that you can buy a set of TMA-1 Studio’s with the iOS control cable included for $20 more than the standard set’s $250 asking price, but we couldn’t find the cable available as a stand-alone purchase on Aiaiai’s website

As we said before, minimalism is the order for Aiaiai ‘phones, and that style is well showcased by the TMA-1 Studios’ simple, all-black matte plastic and foam build. Small coiled cables connect to the tops of the earpieces from the padded headband, and thin slotted arm-pieces allow the earcups to move up and down for size adjustment, completing the succinct design. We found it a pain to connect the interlocking removable cable into the left earpiece at first, but finally got it to click after some nimble finger work. The headphone’s coiled cable is particularly robust and coils more tightly than the cables from competing brands we’ve recently reviewed (take the Technics RP-DH1250, for example), keeping it pretty well out of the way when you don’t need the length.

Adjusting the earpieces is a bit clunky as they slide up-and-down on the slotted arms. When we moved them with the headphones on, the grating plastic knobs were pretty loud inside the earcups. Once they were adjusted, though, we were very satisfied with the headphone’s fit and comfort.

We’re not sure what Aiaiai’s motivation was for employing these new nerf-like foam earcups, but we’ve grown to like them quite a bit. Our out-of-box impression was that they were strange and non-compliant, deviating from what we’ve come to expect from premium, circumaural headphones. But the more we wore the TMA-1 Studio with the foamy ear-cocoons in place, the more we appreciated their light weight and ability to provide some reasonable passive noise-isolation without giving us a case of the ear-sweats. We might even go so far as to say the non-traditional earcups are a small stroke of Danish genius.

Our first test song for the TMA-1 Studio was intended to be a quick listen-through of a track from a familiar friend, Radiohead’s album, In Rainbows. We listened this album to death when it was first released. The record’s complex textures and production style is a telling indicator of what we’re in for with a new set of cans. Though we only meant to listen to the first track and move on, we couldn’t stop ourselves from listening. Before we knew it, the album was over, and we had scribbled out a page full of descriptive notes.

One of the first things we noticed was the headphone’s soft-handed treatment of the low end. Though the TMA-1 Studios may be just slightly bass-intensive at times, the low end is presented with effortless precision. The crunchy synth tones that run rampant throughout In Rainbows bubbled roundly in our ears, almost as if a miniaturized Moog synthesizer was hidden somewhere in those big earcups. The next thing that hit us was the forwardly-placed sheen of the rhythm section, particularly with the drummer’s hi-hat and ride cymbal. While listening closely to the percussion, we were struck with another visualization of a live performance happening within our head. We could almost see the drumstick tapping out each beat of the groove and feel the tiny beans rumbling about in a shaker that sounded like it was right outside our field of vision.

As we switched up musical genres, the TMA-1 Studio’s stereo landscape became more expansive, and their execution of detail drew us in closer. We decided to check out another old favorite that hadn’t come off-the-shelf for a while, Smashing Pumpkins’ Siamese Dream LP. In the track “Hummer,” Billy Corgan’s orchestra of electric guitars was reproduced with delicacy and potency at the same time, like a motorcycle jacket with a silk liner. The drivers seemed to dig to the bone of each different guitar tone — the clean pad guitar in the verse rippling through the soundscape like a stone in a pool, the overdriven distorted guitars lending their tube-soaked goodness with raw power. Throughout the album, all of the instrumentation, from strings to chimes, was presented with perfect balance and definition.

Of course, we managed to come up with a few complaints here and there during our listening sessions. For instance, with some of the tracks we tested, we felt the TMA-1 Studio’s abundance of detail within the wide stereo presentation sometimes pushed vocals slightly down in the mix. We also think some might like more punch in the low-end when listening to hip-hop tracks — not that deep bass goes absent, but it didn’t hold up relative to the detail of the rest of the mix at times. Those are the extent of our complaints, however. As we passed through the decades and genres of our test tracks, we found ourselves smiling several times over the sheer beauty of what these headphones revealed. Whether you’re listening simply for pleasure, or to track down a recording problem in the studio with laser accuracy, the TMA-1 Studio’s will step up to the challenge with ease.

In a field littered with bass-driven, over-styled and shrill-trebled headphones, the TMA-1 Studio headphones shine like a jewel. From the moment we heard the resonant low end and silky midrange matched by clear, shimmering treble, we were hooked. The TMA-1 Studios have almost everything we want in a pair of headphones: smooth, organic bass; detailed, sustaining high end; well-balanced stereo reproduction; and an overall sonic character that feels almost analog in its warmth. We highly recommend considering the TMA-1 Studios for your next headphone purchase. Even if you aren’t in the market for a $250 headphone, the TMA-1 Studio are worth hearing for the sheer pleasure of the experience – and they just might convince you that investing a few extra bucks in a set of cans can pay huge dividends.

The best wireless headphones for 2022