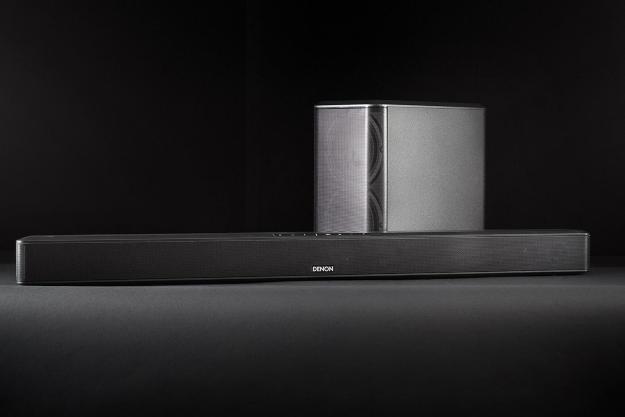 “Those looking for a sound bar with power, detail, and dynamic chops should consider the DHT-S514 a top choice.”

Denon’s first foray into the exceedingly popular sound bar category may have come a little late, but perhaps it was worth the wait. On its surface, the DHT-S514 ($600), is an exercise in simplicity. Like its rather dry name, the sound bar shows little aesthetic splendor, and its understated exterior allows it to blend into its surroundings like some sort of home theater camouflage.

However, beneath that quiet frame lies a potent arsenal of audio components, matched by a deceivingly powerful subwoofer, equipping the system with enough sonic gravitas to stand out as an inviting new choice among a field littered with suitors.

The jet-black DHT-S514 has a slim, rectangular frame, with a small collection of rubberized keys along the top, and port holes bored into each end. The sound bar is light – much lighter than we’d anticipated – and its matte plastic casing was a little boring, but it almost seemed to blend in well with the bottom of our flat screen TV once set on our media stand. Perhaps that’s what Denon intended.

The subwoofer looks more like a PC tower than an audio component.

The back of the sound bar hosts a respectable array of connections, including optical and coaxial digital audio inputs, a single HDMI input, an ARC-enabled HDMI output, an RCA analog input, an IR blaster jack, and a power port.

The accompanying subwoofer looks more like a PC tower than an audio component. At the sub’s front, we found two small drivers that look more like midrange cones than sticks of low frequency dynamite. Still, our faith in Denon’s past audio exploits kept our mind open as we went about placing it toward the left of our entertainment console. On the sub’s back are a simple volume control dial, omitting the phase control and crossover dials we see on more advanced subwoofers.

In a refreshing change of pace, a large white box of setup accessories came with the package, including a small remote control, cables for HDMI, optical, stereo RCA connection, and power, an IR blaster cable, and two sizes of plastic mounts to prop the sound bar up toward the listening position. No instructions were present, though Denon’s site does host an easily accessible link to the manual – paper is so outdated anyway, right?

Denon has chosen a style that allows the bar to almost disappear, rather than define your home theater landscape. Still, it has a sleek shape that looks smart when it does catch the eye, marked by angled sides that seem to flex forward, as if hiding a high-performance beast within.

While we appreciate the subtlety of its minimalist design, we were less appreciative of the fact that the S514 has a rather uninviting user interface and lacks a conventional display. Instead it relies on the LED backlighting of its control panel for communication. The system works OK for volume status, as the keys light up in succession from left to right. But to reflect more complicated settings, such as the sound mode, you almost need a decoder ring to decipher the code. At least there’s that online manual.

Due to its lack of a visual guide, the bar also requires a bit of extra effort to master the controls. Along with the usual suspects such as power, Bluetooth pairing, mute, and volume keys, there were a few mysterious keys on the control panel, including one with a TV icon that turns out is a basic source selector, one with a remote and wavy lines for programming your TV remote, and another with a rectangle and two circular arrows, which was revealed as the Listening mode key. Not exactly intuitive.

Tapping the Listening Mode key changes the S514’s DSP sound engine between the bar’s movie, music, and dialog modes. The movie mode creates a wider, more dynamic sound stage, the music, a softer, closer stereo image, and the dialog mode (as you might imagine) helps push dialog forward. Unlike many bars we evaluate, the modes worked quite well in practice for their respective mediums, and we stuck with them as we changed up our source material. A separate key for night mode levels out big swings in volume so you can hear everything without blasting the house during more explosive moments.

The TV key switches the sound source between the HDMI input and audio coming from your TV. The S514 includes only one HDMI input, so additional HDMI components will need to be connected directly to the TV if you’re to hear them through your system, and that requires that your TV is also ARC-compliant. Most new TVs are, but if you own an older TV, you’ll want to double check. Those without ARC will need to connect a different cable to hear TV audio.

If ARC isn’t present on your TV, you can still control basic sound bar commands with the TV remote by using the Learning mode, engaged by the key with the picture of the remote. To do so, hold the key down for three seconds (until the buttons blink), choose one of the other keys to control, such as power or volume, and then press the corresponding key on your TV remote four times. This feature worked flawlessly in our tests.  The small included remote can handle most of the same functions as the S514’s control panel, including Bluetooth pairing from afar, and the TV/source key.

Unlike many mid-to-upper tier sound bars, the S514 goes into battle with a slim and nimble force of only four drivers, including two ½-inch tweeters flanking dual 2 x 5-inch drivers (think miniature 6 x 9s) spread out to the far sides. The dual drivers inside the sub are 5 ¼-inches each, and work in tandem to deliver the full spectrum of the low frequencies. The full system offers a claimed frequency response of 20Hz-20kHz, and is powered by a claimed 175 watts of digital amplification. And after our evaluation, we were convinced that number is no exaggeration.

Once we’d broken down the control options, setup was a snap. The system can fit in almost any locale, and the sub can rest on its side to lower its profile. We used the HDMI input for our testing, which we recommend as the best option for quality sound and easy control – especially for users who have an ARC input on their TV. As mentioned, users without ARC will also need to attach one of the digital or analog cables from the TV to the bar for any sources hooked up to the TV, like gaming consoles or DVRs, or to hear content directly from the TV itself.

A sound bar’s primary goal is to mimic the engaging experience of a full home theater system, with the convenience and affordability of a small-profile design – in theory. Thanks to a seemingly bottomless pit of engineers trying to crack the sound bar nut, there are a host of devices on the market that offer a whole lot of power. But in our experience, few have the ability to actually control that power and bring about an experience that is engaging for both its potency, and its precision. Denon’s S514 is one of the few that can.

Does the S514 sound like a full surround sound system? No. Does it sound like a pair of tower speakers? Of course not. But it does come convincingly close at times. The system’s soundstage is very big, and the unit sounds powerful for its size. Beyond that, it also has other talents, including rich detail, rigid, musical bass, and impressive dynamic expression.

We knew we were in for a good ride when we dove into the middle of the latest Bond flick, Skyfall. We immediately noticed a silky smooth touch to the entire sound spectrum, and a flair for exposing detail from the movie’s well-mixed soundtrack. There were parts of the midrange that were just a touch soupy and thick occasionally, but dialog was clear and defined for the most part, and it seemed to hit the sweet spot in our ears more often than not.

Our first taste of the system’s raw power came when Bond was forced to shoot a whiskey glass off of a damsel’s head. The shot rang powerfully, with a velvet force swelling from the subwoofer. Throughout our evaluation, that little dual-driver sub showed a remarkable affinity for musicality, revealing the tones of even the lowest notes on the scale with distinction. The rigid push added a heap of power that melted seamlessly into the sound bar’s lower midrange, and also brought a thunderous punch to the action, without the boomy, ill-defined bursts that are common with less capable systems.

On top, the treble showed its own mettle, offering sleek cuts from cymbals and upper percussion that were extremely engaging during chase and battle scenes. We were also treated to clear swells from string parts, and a brilliant, rippled punch from brass. Again there were moments in which we wished for more clarity, but the silky touch made sure the high end was never sharp or harsh.

The S514 was a bit less consistent when it came to listening to music via Bluetooth connection with our iPhone 5. By that, we mean that it tended to fluctuate between pretty good and pretty fantastic. Among the fantastic moments were songs from Daft Punk’s Random Access Memories such as “Get Lucky,” “Beyond,” and “Motherboard.” The system seemed to just sing with the music, providing a firm and potent push of the groove from below, clear and present vocals, and taught snaps from the snare and cymbals above. Instrumental spacing was exceptional as well, and the sound was much bigger than expected.

We also thoroughly enjoyed the S514’s touch with some of our acoustic tracks, such as tunes from our go-to Bluegrass ensemble, Nickel Creek. The word “texture” is thrown around a lot in audio reviews, but we think it’s warranted here. When it came to the gritty attacks of strings from mandolin and acoustic guitar, the unit really dug deep, and the acoustic solo from “Out of the Woods” was rich and golden as ever. The system showed its talent for instrumental spacing here as well.

We were slightly less impressed when we pulled up some Beatles tracks from Magical Mystery Tour. It certainly wasn’t a bad experience, but instruments didn’t seem to flow together very well, sounding too spread out due to the hard-panned 1960’s mixing style. Acoustic guitar and snare were also a tad boxy. Still, it was nothing we’d turn our nose up at while relaxing with a drink after work, and we think most people will have little issue rocking out to their full music collection with the S514.

Denon’s DHT-S514 has both the brawn and the brilliance to elevate the sound of your home theater to the next level. It may not look flashy, and we lament its lack of a digital display for a $600 device, but its performance approaches the big sound you’d expect from a full home theater system, with a profile that barely makes a ripple. Those looking for a supplemental sound system with power, detail, and dynamic chops should consider the DHT-S514 a top choice.