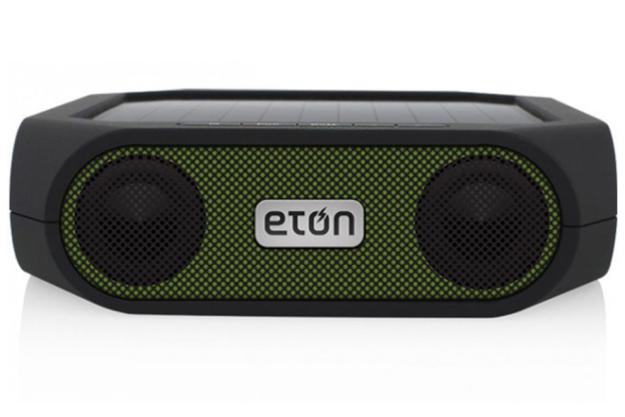 Let’s face it: We may be holding our breath forever waiting for the solar car. But at least one company isn’t sitting on its hands any longer when it comes to solar tech. Etón audio has designed a clever line of solar-powered Bluetooth speakers that are just begging to be taken off the grid. The latest iteration is the baby brother of the company’s popular Rukus, dubbed the Rugged Rukus ($100). The speaker is small, durable, and packs a decent little feature set. But we wouldn’t be doing our job if we didn’t find out if the thing sounds any good. With that in mind, we took the Rugged Rukus into the wild for some in-depth testing. Read on to see what we discovered.

Opening the package revealed two pieces of environmentally friendly packing foam surrounding a neon-green and black wedge that looked something like a cross between Wall-E’s head and Geordi’s visor from Star Trek TNG. A USB charging cable and a small packet of instructions were the only other occupants of the box.

The Rugged’s sharp, face-forward design seems to push the speakers right at you. Two little 1-inch pair of drivers sit behind a circular black screen of solid metal at the front. On the top panel above the drivers is a line of four LED’s that serve as battery indicators, glowing green in succession as the device receives a charge. When Bluetooth is on, the far right light glows blue, and when the battery is low or the device is receiving a solar charge, the opposing light glows red.

Behind the row of lights is a bank of control keys including buttons for power, Bluetooth pairing, battery inquiry, and volume. The rest of the top panel is consumed by a rectangular plane of solar cells. Living in the iPad age, we had to stop ourselves from trying to work the cells with our fingers like a touch screen. And we admit, when we first powered the Rugged on, we looked directly at the cells, as if awaiting a startup screen.

Following the neon sidelines to the back panel (it also comes in all black), revealed two rubberized covers labeled Aux and AC/USB OUT, which protect the speaker’s small selection of ports. Beneath the Aux cover we found a 3.5mm input and a button which, when pressed, fires an eye-searing green LED to indicate the Aux source is active (seriously, this thing was way too bright). Under the second cover was a mini-USB port for charging the Rugged as well as a USB output for charging your smartphone or other small device. A dedicated button commands the speaker to charge your device, with another associated uber-bright LED.

Other features include the speaker’s hard-shell plastic exterior which is “splashproof,” allowing it to get marginally wet without incident. Also, small loops at the back allow the speaker to be clipped on to a pack so you can rock out your Little Wayne playlist all the way up the mountain without all those pesky ambient forest noises getting in the way.

The Rugged’s battery runtime is approximately 8 hours, and the speaker takes about 5 hours of direct sunlight for a solar charge. To wall charge, expect to wait about 2.5 hours.

One thing we’ve learned in our short(ish) time on this planet is that expectations have a serious effect on the satisfaction level we receive from any number of situations. We mention this because the Rugged’s miniscule speakers are not equipped to deliver a full range musical experience, leaving a lot of lower midrange and bass simply absent. With that said, the Rugged Ruckus squeezes impressive levels of brilliance, clarity, and power from its tiny conveyors of sound.

The Rugged was surprisingly accurate in the upper register, and vividly clear on a lot of the tracks we threw at it.

The Rugged was surprisingly accurate in the upper register, and vividly clear on a lot of the tracks we threw at it. R.E.M.’s eponymous album was a prime example, rendered with bright acoustic guitar, shimmering splashes of cymbals and high percussion, and present vocals. Those three sections seemed to be the speaker’s strong points, as it maintained a strong command of the 1-4 Khz frequency range, as well as performing solidly in the upper regions. We had similar experiences with everything from Band of Horses to Peter Tosh, including an impressive rendition of “Down Pressor Man”. The speaker surprised us, bringing a lucid touch to the wild high synths at the intro, and handling the massive production admirably.

We were also a bit taken aback with the Rugged’s resolution of “Hot For Teacher,” by Van Halen. Though the motorcycle-toms at the entrance sounded a bit like the air bubble pops from packing material, the speakers brought a burning force to the electric guitar, screaming out the solo with some real bravado. Cymbals and snare had a smooth touch, and vocals were dead ahead, striking a nice balance. The Rugged’s small directional drivers also presented a decent amount of stereo separation on many tracks, especially considering how close they’re seated in the chassis.

The speaker had a bit of trouble on a few of our test tracks. Cymbals occasionally got too hot, and overly thick productions with mounds of effects like Radiohead’s “Airbag” got a bit muddled in the thick mix of instruments, bordering on distortion. Conversely, poorer produced tracks from indie rock bands often had poor balance, with only guitar and vocals being displayed with much clarity. Still, barring a few such exceptions, we enjoyed a surprisingly smooth listening experience for the majority of our testing.

Etón’s Rugged Ruckus is a clever little wedge of solar-powered sound, packing cool future tech into a sharp, hearty design. A slightly noisy Bluetooth connection keeps us from putting the speaker at the very top of our list, and those who desire a bigger sound from their sun speaker may want to check out the original Ruckus. But if you want to conveniently take your music into the wild, you’ll be hard pressed to find another $100 speaker that does what the Rugged ruckus can.