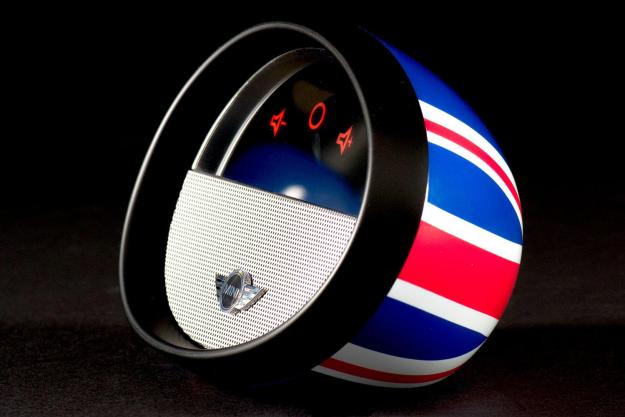 “iUi Design’s Mirror Boombox is cool in concept, but the speaker goes overboard in the bass, creating clips, distortion, and enough vibration to move its tiny frame across a table top.”

A few months back, we took a look at a new Bluetooth speaker from fledgling audio company iUi Design that looks like a side view mirror pulled right off a Mini Cooper. Simply titled the Mirror Boombox ($150), the speaker is loaded with features and serves up a healthy dose of Mini Cooper vibe – it even sports the iconic Union Jack flag pattern.

While the design is obviously unique, the question we had to ask was: Is this speaker more than just a fancy electronic paperweight? We recently took the Mirror Boombox for a test drive to find out if iUi gave as much consideration to its sound quality as it did adulation to everyone’s favorite miniature sports car.

The Mirror Boombox arrived at our desk in a transparent plastic display case, showcasing its automotive curves. Pulling the speaker from the box, we discovered it was much smaller than we’d anticipated. It appears to be about half the size of an actual side mirror, and fits easily in the palm of your hand.

As we scanned the speaker’s glossy plastic enclosure, we found only one obvious control switch, which is located on the bottom. While we were down there, we noted a set of rubber pads intended to keep the speaker in place, including a large, oval-shaped pad that sits directly beneath a vented bass radiator. The speaker’s mirrored front face is divided across the center by a silver speaker screen, crowned with a sparkling Mini Cooper logo. At the backside we discovered a sticker labeled NFC for touch pairing, as well as an Aux input, and a mini-USB port for charging.

Accessories tucked into the bottom layer of the display box included a brief set of quick-start instructions, a cleaning cloth (smart … but watch it get lost), a mini-USB to USB charging cable, and wall adapters for European, UK, and US power outlets.

Apart from the flashy color pattern, which comes in Union Jack, grayscale Union Jack, and Checkered Flag, the thing that really caught our attention as we first toyed with the speaker was the sound of a revving engine upon startup. That sound is followed by a (dare we say sexy?) robotic female voice that speaks in a British accent. The voice shares pertinent information such as “battery at medium charge” or “your device is connected.” It’s a helpful addition, but the volume of these effects can’t be turned down, so both the revving sound and the voice are a bit loud if you’re, say, sitting in a packed office.

The mirror portion of the speaker doubles as an illuminated display, hosting icons that light up like the notifications on the mirror of a luxury sedan. Instead of telling you someone’s in your blind spot, or warning you not to merge, they simply show where to place your finger in order to access three touch capacitive control keys, which occupy a plastic border above. The keys are labeled with a sticker when you pull the speaker out of its box, but once the sticker is gone, you’ll need those lights to find your way.

Pairing the speaker is as simple as holding down the touch capacitive multi-button, which is center-aligned along the top border and indicated by an orange circle on the display. The button also controls pause/play and answers phone calls using an onboard speakerphone. The volume keys handle their obvious function well, and their associated icons blink on the display when volume is increased or decreased. The speaker also gives a beep when it reaches its max volume.

Behind the Mini Cooper logo at the bottom is a small LED to indicate battery status. The light glows blue for a full charge, purple when the speaker is powered on and charging, and red when powered off and charging.

As we looked deeper, we realized that the drivers lurking behind the speaker’s tiny mesh screen at the bottom have little room to work with. It turns out the speaker employs two small 35 mm drivers, each powered by 4 watts of Class D amplification. The active drivers are supplemented by the aforementioned passive radiator that rests just above the speaker’s base pad, combining for a total claimed frequency response of 150Hz-16kHz.

Wireless streaming is accomplished via Bluetooth version 3.0, with aptX codec support for CD quality resolution with compatible devices – though at this size, it’s hard to imagine that making much of an impact. The speaker can also pair with two devices at a time to allow easy switching back and forth, or to be able to take a call from a connected phone while listening to music from another connected device. The Mirror speaker’s estimated battery life is 8 hours.

Like the Mini itself, the Mirror Boombox is small, but packs a serious sonic wallop. In typical small-speaker fashion, a good deal of its power is leveraged towards the middle frequencies of music, allowing the speaker to pump out vocals with plenty of presence, and snare drums and toms with a surprisingly thick crack of the stick, lending a dry, woody color to percussion.

But it took no time at all for us to discover the Mirror Speaker’s bass is too big for its britches. Low frequencies were given far too much power, pushing the little drivers into the red like a Fast and Furious fanboy at an F1 fantasy camp. Electronic pop music and hip-hop were often bit of a mess, loaded with bass distortion, and littered with a strange clicking noise that sounded almost like the crackly scratches of old vinyl — only without the pleasant warmth. Not only that, but the radiator at the bottom pushed so much air pressure through its small vents onto the tabletop that it often turned the face of the speaker to the side, even pushing the entire device backward, as if edging away from us in fear.

When the speaker wasn’t breaking out in bass-related fits, it did manage to coax some nice moments from our music catalog. Elton John’s “Madman Across the Water” was rendered with good balance, and though the background instruments weren’t as detailed as we wanted, the main elements of the song were cast with excellent clarity. Elton’s voice and piano were pressed forward in the mix, tom rolls had some heavy punch, and even the 70’s bass guitar fluttered forth with some caramel-y goodness.

Still, the clicks and pops from the over-inflated low-frequencies continued to rear their ugly heads, and we had no patience for the speaker’s attempts to back away from us across the table like a malfunctioning robot.

iUi Design’s Mirror Boombox is cool in concept, offering iconic style, plenty of features, and a full, punchy sound signature. Unfortunately, in its attempts to pack the power of a much larger device, the speaker goes overboard in the bass, creating clips, distortion, and enough vibration to move its tiny frame across a table top. Unless you just can’t resist the design, we recommend you look to the multitude of other speakers available in the genre.

For a good starting point, check out our recent list detailing 10 awesome Bluetooth speakers for $200 or less.

Google Chromecast tips and tricks to make you a master caster
The best Bluetooth speakers for 2022: Marshall, Sonos, JBL, and more
The best noise-canceling headphones for 2022
Best Bose Speaker Deals for September 2022
How to set up a Google Chromecast to get streaming fast
How to clean your TV screen
How to share a Spotify playlist
How to watch the DC movies in order
Thursday Night Football streaming issues ‘going to be less and less a thing’
Grab this LG 55-inch OLED TV deal from Walmart and save $400
DirecTV to reimburse NFL Sunday Ticket subscribers for Week 2 fumble
Sony’s SRS-XV900 pumps its party speaker lineup to the next level
FuboTV: channels, price, plans, packages, and add-ons