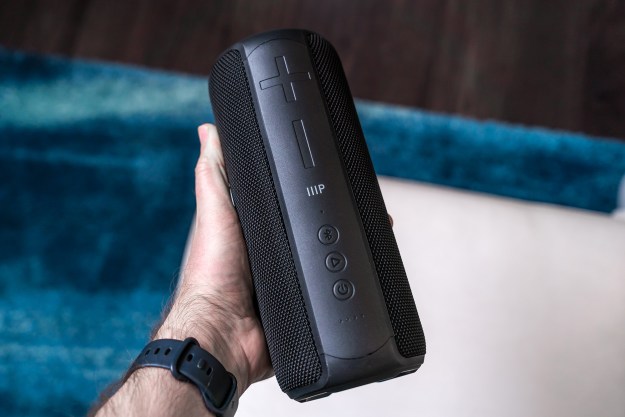 “You'll save money with the Harmony Capsule 200, but don't expect great sound.”

When a Bluetooth speaker is said to be “portable,” it is often a pretty broad term because you can find them in a pretty wide variety of sizes. Some are small enough to fit in a pocket, whereas others wouldn’t comfortably fit in a bag.

Monoprice went for a middle path with its Harmony Capsule 200, a speaker whose portability comes with some heft, giving the impression that you should expect bigger sound. Does that extra girth truly translate into surprisingly good sound? We tested it out to see.

Much like any other budget speaker, Monoprice keeps things pretty basic, with few items to unbox. Apart from the speaker itself, you get a small user manual and USB-C charging cable. There is no wall charger here, so you will need to plug the USB-A side into a computer or other power supply to fill up the battery.

Monoprice went the cylindrical route with the Harmony Capsule 200, not only following what the previous Capsule 100 looked like, but also fitting right in with so many others that have used the same design philosophy, like the JBL Flip 6. It’s not superlight at 2.15 pounds, nor especially short at just shy of nine inches. At its size, you could certainly take it with you to a lot of places, but it’s not going to feel quite as nimble as smaller alternatives might.

It does have IPX7 protection, which is really good to see for a budget Bluetooth speaker. Under that designation, you can submerge it in clear water to a depth of up to one meter for up to 30 minutes. Basically, you can use this by the tub or pool without any major concerns.

You can also prop it upright on either end to save space or gain access to the ports when you need them.

Monoprice has equipped the speaker with dual 52mm and single 66mm drivers inside to pump out sound that should, in theory, burst out of the two sides. It built the speaker to resemble a stereo setup, or even a 360-degree one, though it’s not really like that in practice. The drivers align on either side, with button controls at the top and the feet and ports at the bottom. Passive radiators on the sides belt out the bass. It also has a microphone for phone calls, so if a call does come in, you won’t have to reach for your phone first.

You can also prop it upright on either end to save space or gain access to the ports when you need them. The rubberized trim is nice and tough, both for handling and for the perceived durability you get when you see and hold this thing.

It wasn’t hard to get up and running in mere minutes with the Harmony Capsule 200. I just turned it on, and it automatically went into pairing mode and was connected to my phone in no time. The basic button layout features huge volume buttons that are easy to see. You do have to press a little hard to get the controls to register, but they’re otherwise fine.

The play/pause, Bluetooth, and power buttons are smaller and require the same level of elbow grease to work. I couldn’t get the speaker to pair with two devices at once (Bluetooth multipoint), but that wasn’t a surprise. I didn’t expect a speaker at this price to offer that kind of flexibility anyway.

The 3.5mm Aux-In jack on the rear is great for those times when a wired connection may serve you better.

It does offer some flex in other areas, though. The 3.5mm Aux-In jack on the rear is great for those times when a wired connection may serve you better. Monoprice even includes a microSD card slot to play music directly that way. It work with cards up to a maximum of 32GB, and only with MP3 files, which it will play in the sequential order you’ve stored them on the card itself.

Pressing the Bluetooth button switches between modes, so pressing it takes you from wireless to Aux-In to microSD. Since the speaker doesn’t have a dedicated app, the only way to deliver the extra features it offers is to use the various button combinations outlined in the manual.

A good example of that is the stereo pairing feature,  which allows you to wirelessly put two Capsule 200s together for left and right channels. It uses Qualcomm’s TrueWireless Stereo (TWS) — nothing happened when I tried to do it by chaining them together with a 3.5mm cable.

It’s important to keep things in perspective here. The Harmony Capsule 200 is a speaker that costs $70 — or less, in many cases. Going in, I knew to keep my own expectations in check, and I was right to do so. Despite the somewhat imposing heft involved, the sound doesn’t match that presence. It can get reasonably loud, but clarity and balance are suspect, no matter what the volume is.

A common thing with more inexpensive audio products, be they speakers or headphones, is to prioritize highs and lows to project a lively and booming sound signature. That is very much what Monoprice did, only it underwhelmed the bass and ultimately muddied the mids too much. I’m not nitpicking — it was fairly obvious after listening to a handful of tracks and stayed that way after a couple of weeks of listening to it on a daily basis.

It underwhelmed the bass and ultimately muddied the mids too much.

Monoprice claims it has a built-in EQ through a digital signal processor (DSP) to moderate and balance audio quality, but it’s hard to tell. Without an app to manually control anything about how the speaker sounds, it truly is what you hear is what you get. That’s not to say it’s terrible, it’s just not all that impressive. In a super-competitive market where you can find pretty good sound for less money, the lack of punch in this speaker resonated more to me. As much as I wanted it to, the speaker just didn’t hit the same notes as the likes of the JBL Flip 5 or Anker Soundcore Flare 2, for instance.

If I was to hand this off to kids, or to take it on a camping trip, where its overall state might not bother me as much because of what it costs, I could accept the trade-offs. But as a speaker that I would want to listen to every day, it’s hard to appreciate it as a whole when its main function (sound) feels like something’s missing.

Even with phone calls, I never felt like it was super-effective. I could hear callers well enough, and they could hear me, but it never came off as a great conduit for conversation.

Monoprice claims the Harmony Capsule 200 can play up to 10 hours per charge, and I did get pretty close to that at about 8 to 9 hours, depending on volume. That was with a Bluetooth connection, though results are only marginally better if you’re connected via Aux-In. It’s the volume level that plays the biggest role. When it dies, it does take a good while to recharge it, so you’ll want to plug it in when the LED battery indicator is down to the last light.

It started at $70, though you can often find the Capsule 200 at $60 or less these days. That’s pretty cheap for a speaker this size and with these features. The challenge is that it has one job to do, which is to play audio well enough to at least justify the expense, and I’m not convinced it does that. It then becomes a speaker that might fit into very specific scenarios.

There are several Bluetooth speakers out there under $100, and one standout would be the JBL Flip 5. It costs more, sometimes hovering above $100. It’s also missing things like speakerphone capability and a 3.5mm input, but it sounds better and offers the same level of ruggedness. That’s also a case to be made for the UE Wonderboom 2, which is also fits right in by the pool, and can play for just as long, if not longer.

The Anker Soundcore Flare 2 adds a nifty light show and dedicated app support to supplement the better sound you’ll get out of it for $80.

The IPX7 durability should help keep the outer shell intact for a good long while, yet it’s hard to say whether the internal components will last quite as long. It’s subjective and hard to say, though if you treat it well, it should keep playing for a pretty long time.

No. Better options are readily available. The only catch is those other options do cost more, so if money is tight and you just need something that works and won’t falter quickly, you can try this as even more of a budget option.