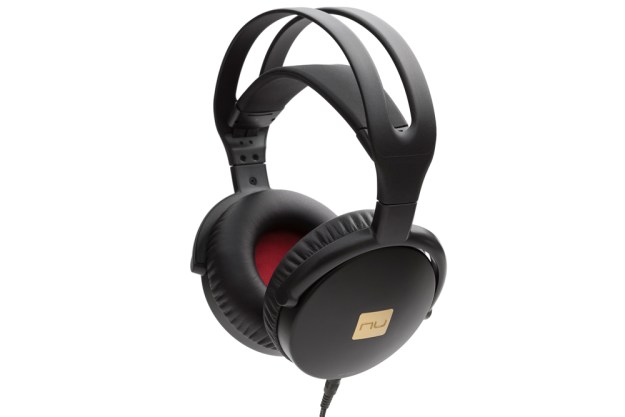 “Kudos to NuForce for proving that, with some focused attention on sound quality, it is possible to make a headphone under $200 that will knock listener’s socks right off.”

When we received word that NuForce would be sending us its HP-800 headphones, we were intrigued. So far, we’ve been pretty impressed with what the company has had to offer. But when we visited NuForce’s website to get a preview of what FedEx would soon drop on our desk, we instinctively rolled our eyes. There it was, right in the first sentence of the HP-800’s promotional synopsis:

Don’t get us wrong, the world could use more consumer-level headphones designed to reproduce the accuracy offered by those specially constructed cans for mixing and monitoring music in a studio environment. It’s just that the notion has been so overplayed by desperate marketing teams that such tag lines have become nearly impossible to take seriously. Yes, we want accuracy; yes, we want detail; sure, we want revealing; and, please, please, please let us get closer to our music than ever before! But don’t promise us such things when you know damn well your hack wares won’t be able to deliver.

But after our knee-jerk reaction, we calmed down, recalling that NuForce has historically been able to back up its claims with great-sounding, well-designed products. We just hoped the HP-800 would continue that trend. Here’s what we found.

The HP-800’s packaging is just nice enough to make you feel like your money was well spent, even before you crack it open. We didn’t find a bunch of fanfare or confetti inside, but we did find a 1.2-meter cable terminated in a standard 3.5mm connector, a longer 2-meter cable with a threaded tip for the included 6.3mm (1.4-inch) adapter, and a carrying case.

The HP-800 aren’t garnished with garish designs. Instead, NuForce has kept things simple, finishing the headphones almost entirely with a matte-black finish. The two exceptions to that rule are the gold, square badges on the outside of each ear cup, and the bright red cloth covering the drivers on the inside of the ear cups.

While the HP-800 didn’t feel cheap in our hands, they did seem to lack the premium feel we’ve experienced with competing headphones. This is probably due to the headphones’ light weight – which ends up being big benefit in the comfort department – so we’ll take it.

The HP-800 come packing 40mm drivers, which are about as large as you want to go if you’ll be taking your headphones out of the house. NuForce says the drivers are mounted into an aluminum die-cast frame which is meant to minimize unwanted resonance and improve articulation.

We like NuForce’s inclusion of a 2-meter long, cloth-covered cable, but are perplexed by its choice to go cheap on the shorter, 1.2-meter cable. The material feels feeble and likely to break. It makes sense to offer a shorter cable for those times when the headphones will be used with mobile devices, but why not cover that one in cloth, too?

The HP-800 are constructed almost entirely of plastic, with the exception of two critical points: the headband and the ear cups.

The ear cups are made of an ultra-soft leatherette material which NuForce has described as “skin-like.” We’re not sold on NuForce’s description, but we will concede the material is exceptionally soft, as is the spongy memory foam it covers. The combination is breathable and comfortable enough for long-term listening, but only moderately effective at blocking out external noise.

The HP-800 adopt a suspended headband design similar to the Harman/Kardon CL, but on a larger scale. Rather than use the arched frame of the headphones as the headband, NuForce uses a springy elastic band with just enough tension to conform to your head when they’re on, but spring back into place when removed. It improves comfort and fit, but NuForce’s choice of material on this headband that leave’s something to be desired.

Rather than mirror the ear cup material on the headband (a common practice), NuForce opted to use the rubbery, anti-skid material we’ve seen popping up on so many consumer electronics products lately. We love the material, but its application on a headphone’s headband doesn’t work for us. While the rubbery surface did keep the headphones from sliding around too much, it also had a way of pulling at our hair if the headphones got tugged or otherwise jerked into motion. Also, since it isn’t very well padded, we were constantly aware of the headband’s presence on our head, which kept us from forgetting about the headphones as we wore them.

On the plus side, the HP-800 are especially light for such a large headphone. We couldn’t get away from their bulk, but we never felt weighed down by them either.

Between the HP-800’s large drivers, all the banter about studio-quality performance, and NuForce’s history of making great-sounding products, we expected some pretty great things from these headphones. And that’s exactly what we got, though not without a few quirks here and there.

Working our way from the top of the frequency range on down, we’ll first mention that we thoroughly enjoyed the HP-800’s treatment of the treble region. We pushed them hard with tracks we know to be piercingly sibilant, but the HP-800 refused to play our game. Jason Mraz’s “Butterfly,” for instance, is loaded with ‘S’ sounds that shoot like a dagger into our inner ear with most headphones, but the HP-800 managed to smooth out Mraz’s forked tongue without robbing the recording of any of its brilliance.

In fact, the HP-800’s ability to keep extremely bright recordings from becoming painful without also sacrificing texture or brilliance might be one of its best tricks. When we listened to Gerald Albright’s soaring rendition of “Georgia On My Mind” from his Live at Birdland West Album, we were surprised not to hear the usual strident wash of cymbals and high-hat from the drummer overtaking the entire recording, but instead a coherent and brilliant reproduction of each and every instrument.

Midrange performance was uncolored, uncongested, and otherwise un-everything-we’ve-ever-hated-about-any-other-headphone-ever. We felt like we heard exactly what the recording engineers and album masters intended us to hear. The HP-800 made us feel like we were poking our heads through a little window into the control room of each studio in which our test tracks were created.

The HP-800’s performance in the bass region is the only area that gave us pause. While the headphone’s treatment of bass was mostly well-controlled, we did note some plumpness around 75Hz that added a little more beef to the bottom end than seemed natural on some of our recordings. On tracks with relatively lean bass levels, this turned out to be a plus, but on recordings with heavier bass programming, we felt there was a bit of bloat around certain instruments that made for some distractions from the headphone’s otherwise stellar performance. For instance, as we listened to Russell Gunn’s treatment of “Blue In Green”, we noted that some of the lower piano harmonics had an unnaturally large presence. Yet, as we spent more time with the headphones, we were able to tune out these occasional anomalies and enjoy the HP-800 for everything else they did exceptionally well.

The HP800 have an amazingly contiguous 360-degree sound field. There are times when we could pinpoint several different instruments at various locations around our head. Other recordings with clever stereo effects had sounds dancing back and forth as if they were traveling between each ear, directly through the middle of our head.

We also loved the HP-800’s resolution of fine details. We were treated to several instances of that rare occasion when an excellent set of headphones can reveal hidden gems within recordings we’ve heard dozens of times, but never took notice of before. This made repeated listening with the HP-800 a real treat.

The HP-800 are a stellar sounding pair of headphones. Based on sound quality alone, NuForce could easily ask $300 for these cans. That they cost half that much should make them the steal of the decade, but, unfortunately, the HP-800 are the best-sounding headphones you won’t really want to wear. Due to a headband that we think some will find uncomfortable, a bulkiness that makes them impossible to forget are on your head, and a rather bland overall design, these ‘phones will probably find homes in the hands of those that prize excellent sound quality over all other factors. Still, with sound quality this good, we dare not give the HP-800 anything less than an 8.0 and a plea to make the next version less clunky. Kudos to NuForce for proving that, with some focused attention on sound quality, it is possible to make a headphone under $200 that will knock listener’s socks right off.