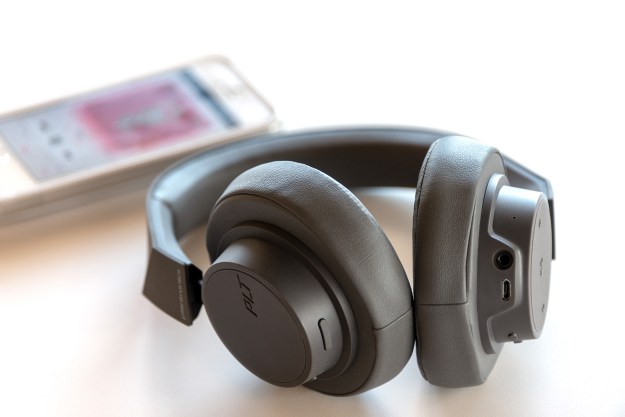 Despite their misleading name — and craftsmanship that feels less than luxurious — the Go 600 grade out as a decent option at their $100 price point. That’s thanks, as usual, to impressively balanced audio performance.

The Go 600 arrive in a somewhat flimsy, gray cardboard box. Inside is another, thicker cardboard box which contains the headphones – nestled within a gray mesh drawstring pouch – along with some of those fold-out product information sheets swathed in impossibly small print. Tucked between the folded earcups are two small baggies containing a Micro USB charge cable and a 3.5mm auxiliary cable.

At first glance, the headphones’ design is less than impressive. Uniformly clad in gray, with purple cloth screens within the earcups and an angular headband, they look like something this writer would have considered “very cool” in elementary or middle school. The headband also has “PLT” printed across it at a slight slant, so parts of the P and T are cut off. There’s a little orange tab above the right cup, ostensibly a stylish reminder that they’re Plantronics headphones, but they already say “Plantronics” in two places and “PLT” on the right earcup, so … maybe we’re just being OCD.

The left earcup (indicated by a large “L” inside) features a rocker-style volume switch and manual controls for playing, pausing, and skipping tracks. On the bottom of the left cup are the charge port and the 3.5mm jack for plugging in when the battery is drained. The right earcup has a little sliding power switch – press up once to turn the headphones on, or hold it up to enter Bluetooth pairing mode – and a button which toggles “bass boost” mode or answers/ends phone calls. We appreciate the inclusion of tactile, physical controls rather than the touch-sensitive kind, which tend to be less reliable.

Despite – or, perhaps, as a result of – their cheap, lightweight build (about 6 ounces), the headphones are quite comfortable, fitting over ears fully without a hint of tightness or imbalance. The headband seems surprisingly durable, allowing us to twist and bend with impunity (to a reasonable extent). They don’t do a great job of sealing sound in or out, as the earcup foam is not of the “memory” variety.

For what it’s worth, the Go 600 do not support aptX or AAC, and they’re not IPX rated for water or dustproofing. The battery, however, is stalwart. In our time with the Go 600, they never ran out of juice, and they charged fully in less than two hours, too, so credit where credit is due.

Considering their physical shortcomings, poor audio performance would have been the proverbial nail in the coffin for the Go 600. Key words: “Would have.” In fact, the headphones are suitably impressive, even though the “bass boost” mode is somewhat underwhelming.

Whether connected over Bluetooth or via auxiliary cable, the Go 600 offer even, balanced sound.

Whether connected over Bluetooth or via auxiliary cable, the Go 600 offer an even, balanced sound signature which seems to work equally well for all walks of music. From the rhythmic thudding and languid guitar riffs of the Arctic Monkeys’ Do I Wanna Know to the synthetic harpsichord and smooth tenor vocals of Ne-Yo’s So Sick, everything seems to be in place.

At first, we thought the headphones were lacking in bass, but we quickly realized that the Go 600 are well equipped to handle higher volumes without resultant distortion (even in high-voltage EDM tracks like Flux Pavilion’s Do Or Die), and that the bass just doesn’t kick in very well below about 50 percent volume. As mentioned, the “bass boost” button – only usable while the headphones are in Bluetooth mode – isn’t our favorite, as it actually seems to mask or suppress other sonic elements rather than augmenting the bass, throwing most tracks out of balance.

Plantronics offers a one-year limited warranty on all purchases in North America. For more information, check out the Plantronics website’s warranty page.

Finding a decent set of over-ear cans at the $100 mark is tough, especially when it comes to wireless models. With that in mind, we’re more than willing to overlook some design flaws in recognition of the BackBeat Go 600’s impressive audio quality. Make no mistake – these are good headphones, not great ones, but at a low-budget price point, good is enough.

Yes. The JBL E55BT are a slightly better option (in pretty much every way) at the same price. The Marshall Mid Bluetooth have aged a bit by now, and they fit on the ear rather than around it, but they offer equally impressive sound and better battery life for a little less cash. Alternately, if you don’t mind sticking with wired cans, the Audio Technica ATH-AD700X outperform nearly all challengers at the $100 level.

While the Backbeat Go 600 initially feel cheaply made – and they’re definitely mostly made of plastic – the headband feels built to withstand twists and turns, and the physical (read: non-touch) controls should last for a while. We suggest keeping them in their pouch while commuting, though, as they don’t fold up completely (the earcups just rotate).

At $100, they’re a reasonable buy, but if we had our druthers, we’d prefer the JBL E55BT or the Marshall Mid Bluetooth (see above).

The best speakers for 2022: great hi-fi options for music and more
The best Roku TVs of 2022: which should you buy?
The best wireless earbuds for 2022
PSB Alpha iQ Streaming Powered Speakers connect to pretty much anything
2022’s best TVs for under $1,000
Amazon saw 15.3 million watch Thursday Night Football on Prime Video
How to watch Pittsburgh Steelers vs. Cleveland Browns on Thursday Night Football
Thursday Night Football stream struggles continue for Prime Video
The best 4K TVs for under $500: premium picture on a budget
Nothing teases its next wireless earbuds with photos of a lipstick-like case
Best new movies to stream on Netflix, Hulu, Prime, HBO, and more
The 70 best movies on Amazon Prime Video (September 2022)
The 50 best movies on Netflix right now (September 2022)