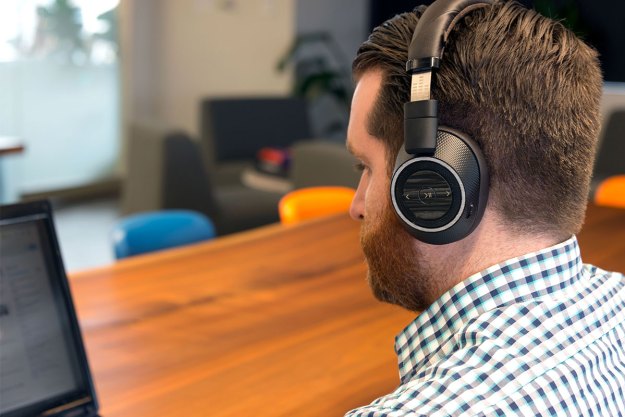 “Plantronics scores a win with the slimmed-down, feature-packed BackBeat Pro 2.”

Plantronics has been known for audio products made for the work environment, but the company’s impressive inroads into the consumer audio space in the last few years have caught our attention. One of those products was the BackBeat Pro, an impressive pair of over-ear wireless headphones, with active noise-cancellation and serious battery life.

Now, Plantronics is back with the BackBeat Pro 2, a successor pair of cans that shed an impressive amount of size and weight, while improving comfort, performance, and wireless range. Corralling all that goodness for a price point of just $200, Plantronics has put together impressive value worth a closer look.

The BackBeat Pro 2 come in a box that is noticeably smaller than their predecessor’s, especially when it comes to the depth. Sliding out the main black box, the headphones are nestled in wrapping paper with the ear cups folded flat to reduce the overall footprint. Underneath is a fabric case with two zippered compartments — the larger one for the headphones themselves, and the smaller one for cables and accessories. Accessories include a 3.5mm audio cable for wired input, a charging cable, plus the quick start guide and warranty information.

Our review unit came in a black and tan color, though there will be another “special edition” version (for $250) that will be primarily grey and include a hard shell case.

While trimming plenty of fat, Plantronics didn’t roll the dice too far in giving the BackBeat Pro 2 an aesthetic makeover. The colors are neutral, and the design materials are strikingly similar to the original Pro. The headband and ear cups have a soft plush vinyl finish, with easily identifiable left and right channel.

The left ear cup has a small selection of playback controls with an NFC tag inside for quick pairing with compatible devices (i.e. select Android phones). Along the side is a toggle to go from ANC (active noise-cancelling), open-listening, or in between for neither. ANC blocks out ambient noise to make audio sound clearer, while open-listening lets in ambient sound to hear announcements and conversations without having to remove the headphones.

The somewhat restrained punch in the bass allows the mids and highs to flourish.

The right ear cup has a large function button used to make or take calls with a simple tap. A double-tap calls back the last caller, and holding it down can access Siri for iPhone users, though we weren’t successful in making this work with either Google Now or the new Google Assistant using a Pixel XL smartphone.

The power and Bluetooth toggle is on the side of the right ear cup, and inside is a capacitive sensor that pauses audio when the headphones are removed, and starts it back up when you put them back on. Rounding everything out on this side is a 3.5mm jack and mute button.

There are two noise-cancelling microphones inside that make up the ANC feature, and these do kick in to make phone calls clearer on both ends. We’ll get to that a little later, but we tended to agree.

The BackBeat Pro 2 extends the Bluetooth range from traditional 33 feet to 100 feet, which is just what you want from wireless cans. We were able to listen to music in the basement streaming from a phone charging in a bedroom two floors above. There were no real cutouts or lags that hindered the listening experience. Battery life is rated at an impressive 24 hours of runtime, with up to 21 days of standby power, and a DeepSleep hibernation that could last up to six months if left on by accident.

There isn’t much setup required with these headphones. They go into auto-pairing mode when you turn them on, and we had them paired with an iPhone in less than 60 seconds. Using NFC tap-pairing on an Android device was even faster.

A free iOS and Android app called PLT Hub is Plantronics’ mobile tool for learning its products, including the BackBeat Pro 2. It’s limited in scope because it doesn’t allow users to make significant changes to any settings. That is meant for the Hub app on Windows and MacOS, where certain settings, like the language, audio alerts, and more can be changed. It’s also the platform for any firmware updates that might come down the pipe. While we felt no reason to, disabling the sensors requires holding the mute and main function button together for four seconds until an audible “smart sensors off” is heard. Repeating the process turns them back on.

Plantronics says it made some adjustments to the EQ for these headphones, and if that is indeed the case, the improvement isn’t anything substantial. The somewhat restrained punch on the lower end of the audio spectrum allows the mids and highs to flourish. It’s not adversely weighted — the bass does come through — but the Beats crowd is unlikely to feel the kind of bounce they would probably expect. Audiophiles might also feel a bit underwhelmed by the overall sound.

The BackBeat Pro 2 isn’t made for those crowds anyway, so we understand the neutral stance taken here. The idea is clearly to make music sound good, rather than exceptional. Comfort and reliability are the primary takeaways we got out of listening to these headphones on a daily basis. Each musical genre is treated the same, so it’s hard to distinguish specific moments that trump others in overall fidelity.

That’s great news if you consider yourself an eclectic listener with varying tastes, like we are. Whether your jamming classic rock, smooth jazz, house, or hip hop, you won’t feel cheated. In our listening sessions, we were never blown away, but we came away satisfied, and everything we listened to came through with grace.

Noise canceling is also solid, with the slight hissing we noted from the previous model having been reduced to near-inaudible levels. In testing, that was noticeable initially because switching from regular listening to ANC didn’t feel distinct until later on. The highs and mids get a boost in ANC mode at the expense of the bass. It’s not a terrible trade-off, by any means, but it’s something we became more aware of over time.

We were not surprised in the slightest that call quality is terrific. Plantronics’ pedigree in this area is evident, and you should be able to have conversations with friends without them even noticing you’re talking through a headset. Voices come through clearly, and speech from the headphones is consistently loud and clear on the other end.

Plantronics offers a one-year warranty for repair or replacement for defective units.

Plantronics cut the BackBeat Pro 2 down to a size and weight that makes them much easier to take along on longer trips. That makes a noticeable difference when it comes to comfort, too, allowing you to wear the Pro 2 longer than their predecessor. Sound is also solid, and there are some impressive features loaded into the package for the Backbeat Pro 2’s $200 price point.

Bluetooth over-ear headphones with ANC aren’t outliers anymore, so alternatives exist. It’s just not always easy to find really good ones at this price. When looking at a product like the BackBeat Pro 2, it’s tough to compare them to the Bose QuietComfort line because of the price discrepancy – the QC35 wireless headphones from Bose will run you $150 more than the BackBeat Pro 2, which is why these headphones from Plantronics are so enticing. They won’t sound as good as the QC35, but they aren’t a far cry, either.

There are also a number of smaller on-ear cans around the $200 line, but few if any offer the same feature set. Take a look at anything in the Beats line these days, and you’ll understand what we mean. If you have money to burn, you may opt for something flashier that produces sound more to your liking, but those on a tight budget will have a hard time finding more for less.

The BackBeat Pro2’s battery life is excellent, and the 100 foot Bluetooth range is the real deal. Granted, these are made of plastic, so they don’t have the robust build of more expensive headphones, but that doesn’t mean these aren’t durable.

We would have loved the inclusion of a harder shell case with the BackBeat Pro 2 for storage during transit, but at least the special edition has that. Our experience with Plantronics products is such that they don’t degrade quickly at all, so we’re confident that continues here as well.

It’s hard to argue with the price. At $200, these are highly competitive and offer solid value for the money, so if you’re looking for good ANC headphones for the long haul on a tighter budget, you will like what you get here.