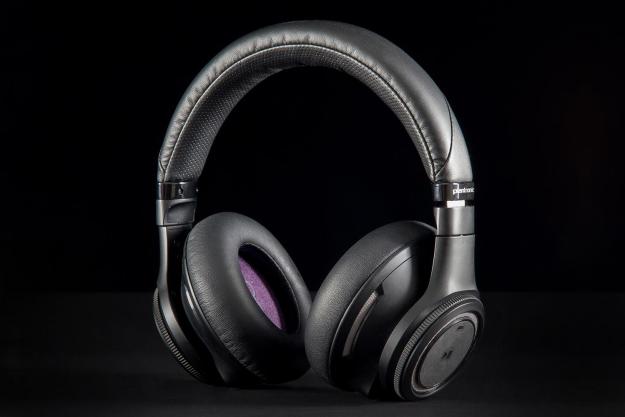 “For the hard-core traveler, the BackBeat Pro delivers the right blend of cutting-edge tech and performance.”

When the BackBeat Pro hit our desk, we weren’t sure what to think. The last time a Plantronics product sat on our head, it was in a call center, so to say the headphones didn’t incite flood of great memories would be an understatement. But then we had a closer look at the box and its rather impressive list of specs: incredible battery life, incredible wireless range, incredible noise cancelling – incredible, indeed!

Still, making a headset for communications and one for music playback are two totally different animals. First and foremost, the BackBeat Pro had to sound good, and we’re happy to report that they do – far better than we expected, in fact. If you’re a frequent traveler, you’ll want to give BackBeat Pro a test drive. They are one of the most comprehensive sets of noise-canceling headphones we’ve tried yet.

The most notable thing about the BackBeat Pro’s packaging is its bold claims: Up to 24 hours of continuous wireless streaming, up to 330 ft. range, and a “DeepSleep” hibernation mode extends battery life by up to 6 months. Could these headphones deliver on any of those promises? Experience tells us: probably not. But we were going to have fun finding out, anyway.

Although they are lighter than they look, the BackBeat Pro are still on the heavy side. Part of the cans’ bulk comes from the headphones’ well-endowed ear cups, which are capped with control dials. On the inside, the ear cups are very well padded, which you won’t hear us complaining about.

In the box with the BackBeat Pro we found a heavy-duty travel pouch (seriously, this thing could be bulletproof) with a super-plush purple lining, a purple headphone cable, and a purple charging cable. Unfortunately, no ¼-inch adapter was included, which gets a big sad-face emoji out of us.

If you’re looking for a brag-worthy headphone, the BackBeat Pro certainly qualify. The cans can be connected via Bluetooth with two devices at once, and when connected to another Class 1 Bluetooth device, can manage a wireless range of over 300 feet. Of course, most smartphones and tablets are Class 2 devices, which makes Plantronics’ wireless range claims a lot less meaningful. Still, we found they bested most of the Bluetooth headphones we have on hand in terms of wireless range, managing to stay connected when we moved around corners at distances of greater than 30 feet.

We used the headphonesfor nearly 26 hours before we had to charge them up.

When it comes to interfacing with your smartphone, the BackBeat Pro offer a best-in-class experience. When connected via Bluetooth, a jog dial around the left ear cup allows you to advance and back up tracks. Pressing the disc-shaped button surrounded by the dial will play/pause music. On the right side, another dial handles volume control, and another button handles answering/disconnecting phone calls. Plug in the headphone cable and controls on the left side of the cans are disabled in favor of the cable’s inline controls.

A favorite feature among travelers/commuters may be the mute switch on the bottom of the right ear cup, which not only attenuates the audio signal coming through, but pipes in any sound captured by the headphones’ microphones, making it easy to place that drink order when the beverage cart comes rolling by.

We also think users will be fans of the fact that the BackBeat Pro go into a sort of hibernation mode whenever the headphones are removed from the ear in order to save battery life. A sensor inside the left ear cup senses when an ear is present and enables/disables playback accordingly. You can play around with this feature simply by lifting the left ear cup off your ear.

It should be noted that the BackBeat Pro can be used passively, and with a headphone cable, no matter the state of the battery – even if you do run out of juice, you don’t have to worry about suffering in silence. As is to be expected, the sound quality you get when the headphones are turned off differs greatly from what you get when they are turned on, and even more so when the active noise canceling feature is switched on.

Other nifty features include a 5-LED battery indicator on board, battery status indicator display on smartphones, clear Left/Right indicators on the inside of the ear cups, and multi-language voice prompts that cover power status, battery life, Bluetooth pairing status, max volume, and more.

As with any headphone, comfort levels will vary depending on variables such as head width and ear size. Still, we can say the BackBeat Pro exert a modest amount of clamping force, and have enough padding on the ear cups and headband to make for comfortable long-term wear. We did notice that, after about 4 hours straight of wear, we were ready for a short break.

Any headphone that has a power button is going to sound different when turned off than they do when turned on – that’s what tends to happen when you introduce an active circuit. Furthermore, active noise canceling circuitry further shapes the sound, meaning a headphone with ANC turned on is going to sound even more different. The BackBeat Pro are no exception to these rules.

When powered up, the BackBeat Pro spring to life

When played completely passively, the BackBeat Pro have a laid back, somewhat two-dimensional sound that’s punctuated by a distinct bass punch which makes kick drums especially pronounced. We also noticed the upper midrange/lower treble lacked a certain amount of zeal, which made the midrange sound a little recessed and veiled. We wouldn’t go so far as to say the BackBeat Pro are muddy in passive mode, but they do lack a certain openness and engagement.

When powered up, the headphones spring to life, adding excitement to the upper midrange and treble that stops shy of taking on too much bite. With this enhancement to the treble region, the BackBeat Pro show off a lot of detail and harmonic overtones. They are also spectacularly dynamic. Bass also remains a major figure, but with the rest of the frequency range better balanced, sticks out less prominently. The bass is also as tuneful as it is deep – you get a clear definition of a bass guitar’s tonality, for example, which sets up a highly musical foundation for the rest of the sound to rest on.

Those who don’t understand how noise-canceling circuits work may be surprised to learn that the BackBeat Pro sound considerably different with the ANC turned on – if there is no real noise to cancel, that is. We noticed in our office testing that turning on ANC resulted in a loss of bass response, and a distinctly pinched-off sound in the upper midrange that came off as nasal. We suspected that the BackBeat Pro would sound significantly different when in an environment wherein their ANC circuit could perform as it was designed to. We were right.

We took four separate round-trip flights with the BackBeat Pro and brought the Samsung Level Over along for the ride for one of those trips. Not only did the BackBeat Pro sound significantly different with the ANC circuit working hard at canceling out the rumble of the planes jet engines, but they were also superior to the Level Over in terms of both noise-canceling ability and overall sound quality, expressing more dynamics and realism, slightly deeper bass, and better isolation from background noise.

Our only real criticism of the BackBeat Pro would be their tendency to get a little aggressive in the highs on treble-intensive songs. For instance, Rodrigo y Gabriela’s album ,11:11, has a lot of snappy transients that come from the hard strike against guitar strings and playful snaps on guitar bodies. With this song, the treble tended to poke at our ears more than we’d like. However, this effect was not a problem for 90 percent of our listening.

The BackBeat Pro may be bulky and industrial looking, but what they lack in aesthetic panache, they make up for with fantastic features and great sound. And while Plantronics’ latest can’t beat the Bose QC25 at their own game of noise canceling, they get mighty close, and sound better. For the hard-core traveler, the BackBeat Pro deliver the right blend of cutting-edge tech and performance, all at a price that undercuts the competition.

Amazon’s third-gen Fire TV Cube has great features the Apple TV is missing
Amazon adds spatial audio to the Echo Studio smart speaker
B&W’s flagship Px8 headphones cost way more than they were supposed to
Best Headphone Deals: Beats, Bose and Sony from $130
The best superhero movies of all time
Marantz’s new Cinema series AV receivers are a stylish way to go 8K
The best superhero TV shows of all time
What’s new on HBO and HBO Max and what’s leaving in October
These giant TVs are all under $300 during this Walmart TV sale
Best Prime Day Deals: What to expect from the October event
Sennheiser Ambeo Soundbar Plus hit by unforeseen technical delay
The best TVs of 2022: our favorites from Samsung, LG, Sony, and more
Apple AirPods Pro 2 vs. Google Pixel Buds Pro