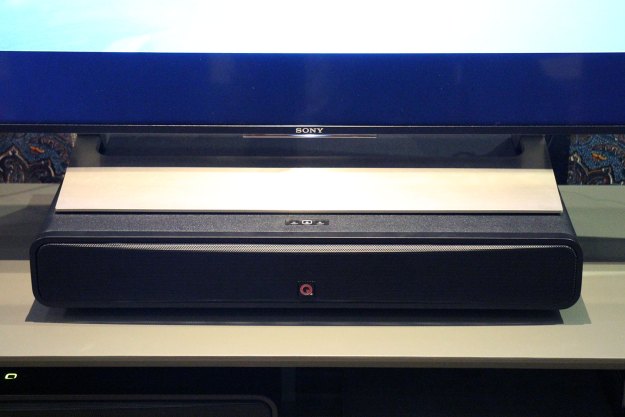 “Delivering a natural, bassy sound, the Q Acoustics M2 Soundbase has all the benefits of a soundbar with an even slimmer profile.”

Soundbars may be designed for minimal interference with your living room décor, but many of them still take up plenty of space on your TV stand. That’s where a soundbase can come in handy, offering a speaker system that’s compact enough for your television to sit on, while still delivering improved sound quality. As we discover in our M2 Soundbase hands-on review, Q Acoustics has packed its considerable sound expertise into a more manageable design.

The obvious reason to get a supplementary sound system like a soundbar or soundbase is because the speakers in your TV don’t sound great. The M2 Soundbase is a considerable step up, and takes a different approach to the speakers inside than other manufacturers. It employs a pair of 2.3-inch Balance Mode Radiator (BMR) drivers, along with a 6×4-inch internal “subwoofer.” Balance Mode Radiator drivers have a wonderfully wide 180-degree soundstage, spreading audio around the room, so you’re not forced to sit in the sweet spot to get the best sound, while the wider speaker is there to beef up the bass.

Bass response, or a lack thereof, was our problem with the Q Acoustics M3 soundbar, but the Q Acoustics M4 soundbar improved on that dramatically. The company recognized the need for a compact, well-designed alternative to the M4, and the M2 Soundbase is the result. Like the M4 the M2’s cabinet is made from MDF, with plenty of internal bracing, and solid embedded feet to keep it secure. While easier to tuck away, the M2’s cabinet is actually larger than the M4, which makes the best out of the 80 watt total power output.

It’s surprising how much punch and presence there is from such a compact box.

The M2’s cabinet is very simple, and it’s a breeze to set up. It weighs less than 13 pounds, and can support a television weighing less than 55 pounds on top. If you need to put it in a cabinet, a switch on the rear changes the audio characteristics to compensate for a small or large enclosure. Another switch gives older televisions that don’t have strong audio output a boost.

Connections include HDMI ARC, digital Optical connection, and both 3.5mm and RCA analog Line in jacks. The M2 also has Bluetooth with AptX, too. There are just three buttons on top of the cabinet, and a remote is also supplied. If the thought of complicated audio systems make you break out in a sweat, the M2 Soundbase is a great option.

What you don’t get is Wi-fi audio connection, so there’s no using it as the center in a wireless surround sound system like the Sonos Playbase; but then it doesn’t cost $700. Instead, the Q Acoustics Soundbase is priced at 300 British pounds for its UK launch, and when it launches in the United States in October, it’s expected to be around $300. While not all the Playbase’s features are replicated here, it’s hard to ignore the M2 when it’s half the price.

We’ve only been granted a brief time with the M2 so far, which included a music track, and a sequence from Prometheus, with Q Acoustics’ MoviEQ mode active. The company is proud of its natural sound quality, and music performance is strong, just like we’d heard before from Q Acoustics products.

Watching the movie with MoviEQ active delivered plenty of bass, but the speech was a little muddy. MoviEQ mostly tweaks bass response, particularly at lower volumes. Turn it off, and although the bass is definitely reined in, you can still feel it. The sound becomes more focused and less distracting for movie watching. It sounded better to our ears, but that will likely depend on the film and environment. It’s surprising how much punch and presence there is from such a compact box. It can definitely be described as room filling, though stereo separation wasn’t very pronounced in our limited test.

Ever since we’ve checked out the Q Acoustics M4 and M3 soundbars, we’ve wanted a product that combines the best of both products. A strong, natural sound, plenty of bass, an HDMI ARC connection, MoviEQ, and a modern design. The M2 Soundbase appears to be that product, and in our brief listening period, the sound impressed. We’ll be listening for a longer period soon, and hope that impression continues.

The best wireless headphones for 2022