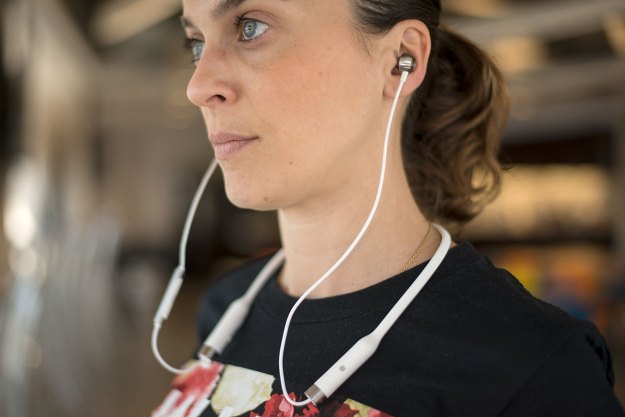 “At just $100, the RHA MA650 Wireless offer a sublime combination of clarity and comfort.”

Wireless earphones are quite common these days. Sneeze on a crowded train or bus (…okay, please don’t) and you’re reasonably likely to hit a pair. In a crowded segment, it can be tough to stand out, and while the RHA MA650 Wireless look snazzy, they don’t offer any groundbreaking or unique features.

Given that MA750 Wireless were decent – but not great – we weren’t expecting a whole lot from the cheaper MA650. That said, RHA is a solid brand which has impressed us over the years, and we’re happy to report that the British brand’s latest are actually pretty awesome.

With a hang tab on top and no shortage of iconography detailing the headphones’ many features, the packaging for the MA650 Wireless looks very much like it was designed for airport vending machines. That’s not a criticism, just an observation.

Inside the magnetically sealed box, the headphones are snuggled neatly in a gray foam block, arrayed in the shape of a stethoscope opposite some color-saturated photos on the fold-out flap. Pulling out the foam (and the plastic overlay) reveals three cardboard compartments with pictures identifying their contents: Replacement eartips, a short USB-C charge cable, and a silvery mesh carry pouch. Between the foam and the cardboard, we found a user guide and a warranty sheet.

The wide selection of eartips – four extra sets of regular silicone tips, two sets of flanged tips, and one set of Comply foam tips – continues a welcome trend from RHA, arriving in a neat little metal punch-out board. For some reason, there’s another spare set of silicone tips hidden in the carry pouch, too — not that we’re complaining.

The earphones, clad in brushed aluminum, fit snugly into our ears with no discomfort and sealed relatively well.

We understand that some people have longer necks than others, but the length of the wires is such that strenuous exercise – running, Crossfit, anything more than basic weightlifting – can cause them to bounce around and become a distraction, if not an outright obstacle.

Thankfully, the earphones themselves, clad in brushed aluminum, fit snugly into our ears with no discomfort, and sealed relatively well (though we did prefer the fit of the Comply foam tips and/or the flanged tips). The rest of the package, apart from the 3-button inline remote and the ends of the neckband, is dressed in all white.

The neckband is molded from a rubbery material which felt comfortable against our skin, and stayed put thanks to weighted tips. The headphone casings are magnetic on the backs, so they snap together conveniently (and stay there) when hanging around your neck. Altogether, the headphones weigh less than 1.5 ounces.

Unlike the MA750 Wireless, the MA650 don’t have over-ear guides; they sit vertically, with the wire resting between the bottom flaps of your ear canal (or the tragus and antitragus, for you bio majors). The right side of the headphones — marked by a little white “R” on the inside of the wire — is where you’ll find the remote, the power button, and the charge port, covered by a little “Never charge wet” sticker. The MA650 are IPX4 rated, which means they’re fine for sweat and rain and not at all fine for full submersion.

RHA claims a 12-hour battery life for the MA650, which seemed accurate in our testing (after about 5 hours of listening, powering on the headphones triggered a “Battery below 60 percent” audio cue).

Another neat feature worth mentioning: The neckband vibrates to indicate calls or texts when connected to a phone.

To get things going, simply turn the headphones on (hold the power button down for a few seconds) and they’ll enter pairing mode. Pick them from your device’s Bluetooth menu, or tap an NFC-enabled device against the NFC logo on the left side of the neckband.

The $170 MA750 Wireless suffered from overwhelming treble, distorting the sound signature. The MA650 don’t seem to have this issue, though they’re not without fault. In fact, the opposite seems to be true here; instead of going overboard, RHA played it safe, resulting in smooth, warm audio that is pleasant and relatively accurate, if not exactly mind blowing. (It should also be noted that Comply foam eartips do tend to dampen treble a bit.)

The earphones, clad in brushed aluminum, fit snugly into our ears with no discomfort and sealed relatively well.

Thanks to support for aptX and Apple AAC, the MA650 offer impressive clarity for their class, revealing a level of detail you don’t often find in headphones at the $100 level (especially the wireless in-ear variety). For example, the vocals on A$AP Rocky’s Goldie are crystalline, and muted record scratches shine through below the beat.

Unfortunately, the beat itself doesn’t hit with much muscle, leaving us a bit crestfallen. The same goes for most percussion, as neither electronic 808s nor kick drums provided the sense of weight we wanted. Turning the volume up worked reasonably well – and, to RHA’s credit, produced no distortion – but you don’t want to shred your eardrums for some bass. Perceived bass response for in-ear headphones can very much be a product of fit, so other ears may have different results, but we wished for more down low.

We were also a little disappointed at the lack of brightness in the upper register, as moments like the guitar solo on Daft Punk’s Aerodynamic don’t quite attack with the sharp precision we crave. Listening to Tidal on the “Master” (CD-quality) audio resolution setting rectified this somewhat, but not everyone has that option.

That said, we appreciate the MA650’s sound overall, as every track is clear and balanced, no matter the genre. Consistent quality trumps moments of excellence, in our opinion – especially for earphones priced just above the budget segment.

The MA650 won’t knock your socks off in terms of audio reproduction, but they’re extremely comfortable, with a respectable battery life and a laundry list of useful features. They perform well enough – and consistently enough – that we can dismiss minor concerns about tonality. At $100 or less, they’re a good buy.

Depending what you’re looking for, there may be better choices. Given the MA650’s cumbersome cords, exercise junkies will be better off with something like the Jaybird X3 or the pricier Jabra Sport Pulse Wireless SE.

For more bass, check out the Optoma NuForce BE6i, and for a brighter sound, check out the Shure SE215 Wireless (though they’re a little more expensive). If you don’t mind spending $170, buy the Forza Metallo Wireless.

The MA650 seem fairly sturdy overall, though the wires connecting the earphones to the neckband do feel a bit dainty. Unless you get water in the charge port, we imagine they’ll last more than long enough to get your money’s worth.

There are a lot of worthy headphones around the $100 price point, but if consistency and versatility are important to you, you should consider the MA650 Wireless.