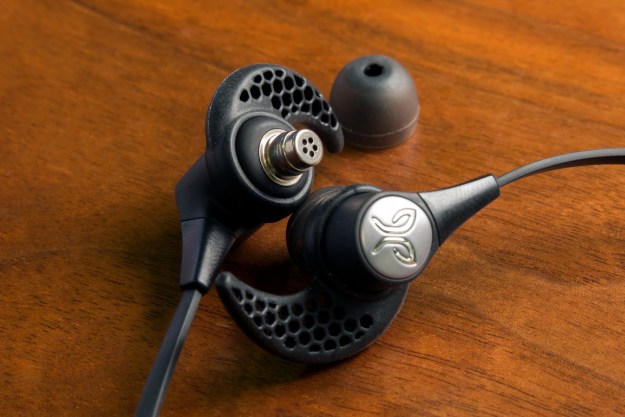 “Improving over both previous efforts, it’s third time’s a charm for Jaybird’s X3.”

The in-ear wireless sports headphone train continues to roll along with more and more options sprouting up, and vendors like Jaybird have felt the pressure to deliver something better.

In the case of the new X3, Jaybird has succeeded. Third time really is the charm for Jaybird — after falling short in its previous two efforts, the X3 brings much improved audio quality, a tweaked form factor, the addition of Comply Foam tips, and the ability to take a beating. The winning combination makes these wireless in-ear headphones among the best in their class.

To ensure fit and comfort are paramount with the X3, Jaybird includes three sizes of ear fins, three pairs of silicone gels (large, medium, small), and three pairs of Comply Foam tips in the same sizes. We’ve been seeing the latter option more often lately, including with the Jabra Sport Pulse Wireless Special Edition, and clearly, the company believes any combination of those should be enough to maintain a tighter seal. On top of the tip options, there are two cord clips to help shorten the slack and keep the cable from dangling too much, along with one shirt clip to hold them in place.

The included carry pouch isn’t a hard shell, which is a little unfortunate, but the polyester used to make it is better suited to absorbing some of the inevitable perspiration the earbuds are subjected to. A quick start guide itemizes every accessory, and explains the simple setup process, including a teaser to download Jaybird’s free MySound app on iOS and Android.

Compared to the X2, Jaybird managed to trim a little fat on the X3’s overall form factor, allowing for a great fit that doesn’t strain the ear canal. The inclusion of all those tips and ear fins would be less impactful if the body of each earpiece wasn’t slimmed down to start.

In tackling the ho-hum audio quality of the preceding models in this line, the X3 has re-engineered 6mm drivers inside, delivering punchier lows and more resonant highs.

The onboard battery also gets a makeover, courtesy of a switch from nickel-metal hydride to lithium-ion, resulting in faster charging and improved battery life. Jaybird rates it at eight hours per charge on “moderate volume,” which would put it about even (if not above) many others in the same class.

The charging cable is a unique setup: it’s a two-piece design in the form of a short micro-USB cable that plugs into a small hub for the X3’s inline remote. A lanyard holds the two together to avoid undue separation and loss, but of all the accessories that come with the X3, that hub is the most critical to keep safe. Otherwise, there is no way to charge these without buying a replacement from Jaybird.

The three-button remote has a primary function button to power the X3 on or off, as well as play/pause and answer/end phone calls. The volume buttons are self-explanatory, and when music is paused, pressing the volume down announces where the battery level stands. When paired with an iOS device via Bluetooth, a visual battery indicator also appears on the top of the screen.

Holding down the primary button for two seconds brings up Siri from an iOS device or Google Now when paired with an Android handset.

Pairing the X3 with just about any mobile device is fast and simple, and Jaybird enables it to be paired to two devices simultaneously. A good example of how that would work would be to have music playing from a personal smartphone, while incoming calls can come from a work handset.

Connectivity options are actually pretty varied. Two sets of X3 headphones can connect to the same mobile device to share the audio. The X3 can also pair with a smartwatch that plays music natively to cut the smartphone out of the equation. Turning on the X3 prompts a voice command noting as such, while turning the earbuds off does the same.

The free Jaybird MySound app for iOS and Android isn’t necessary for setup, but does offer different EQ sound profiles, along with customization options to tailor fidelity based on personal taste or music genre. The “signature” setting is Jaybird’s default, and sounds quite good on its own, though others do prove worthwhile too.

Where the previous X2 suffered from leakage and dull bass due to an ill-fitting design, the X3 corrects these flaws in impressive strokes. The tweaked form factor and smaller ear fins help the buds feel secure, vastly reducing the number of times they need re-adjustment.

Whatever Jaybird did to the drivers also pays audible dividends. The better fit helps the cause, no doubt, but it was clear to us after several hours of listening that the lows were given their just due. It’s not at the expense of the highs and mids, which are still clear enough, at least for a pair of wireless sport earbuds. Complex recordings with complex instrumentation aren’t going to sound especially rich, but that’s acceptable given the primary role the X3 earbuds serve.

The Comply Foam tips are excellent at isolating background noise, but not well suited to sweaty situations because of how their malleable foam contorts and deforms over time. The gels are much better for the gym or out on a run.

The great noise isolation the X3 deliver is great for sound quality, but runners who want some ambient noise filtering through for safety reasons may need to try using a size smaller than the best fit to leak in some of the background with the tunes. The ear fins prove adept not only at staying in place, but also at absorbing a fair amount of sweat. Like any wireless sport earbuds, the X3 do need to be cleaned carefully to avoid buildup that could eventually find its way into crevices, but that’s pretty standard.

Jaybird managed to trim a little fat on the X3 for a great fit.

Phone calls sound good, though we would hesitate to go beyond that. Callers come through fairly clearly, and you won’t likely get complaints, though you’re not likely to get any compliments, either. We had to move the mic closer or raise the volume a few times to ensure each side could be heard if there was background chatter, which isn’t necessarily common with other wireless earbuds we’ve reviewed.

Battery life holds up well, even if you don’t get an exact audible approximation of where you’re at. The embedded voice breaks battery life down from 20 point intervals, from fully charged on down to 20 percent, which then prompts a low-battery warning followed by a recharge indicator. Jaybird’s rated eight hours is true if the volume level is kept closer to 50-60 percent, but in fairness, the X3 were plenty loud at 75 percent, so we consistently managed to get seven hours out of them.

Jaybird offers a one-year limited warranty from the date of retail purchase or shipment when ordered online, and that coverage does include failure due to perspiration. The warranty extends to retailers who will sell the earbuds, so claims would have to go directly to Jaybird with the original receipt included.

Until the end of 2016, Jaybird will replace a lost or stolen charging cable, but will charge a fee for doing so once the calendar hits 2017.

Whether Logitech’s acquisition of Jaybird had anything to do with the improved performance in the X3 is unknown, but in any case, we came away pleasantly surprised. The audio quality is easy to appreciate, while the comfier fit and relative ruggedness serve to make the X3 a well-rounded product with plenty of value.

As with any wireless sport earbuds, durability and longevity are understandable concerns. Jaybird sells the X3 for $130, which isn’t bad for what you get, but we’ve seen them go for $100 at Best Buy, which is well worth the price for the audio fidelity alone.

Jaybird didn’t pack a ton of features into the X3 because the focus is clearly on staying in place to pump out impressive audio. If you’re looking for more features, Jabra’s Sport Pulse Wireless Special Edition include a heart rate monitor in the left earpiece, adding an activity tracker the X3 doesn’t have, but you’ll likely pay a bit more for the pleasure. The Sport Coach Wireless Special Edition, also from Jabra, have a motion sensor to automatically count reps during workouts. Both options also come with three-year warranties for damage from sweat, contrasting with Jaybird’s one-year deal, though all three headphones stack up pretty equally as far as sound quality.

If extra frills aren’t your speed and you just want to hear tunes, you could also check out Plantronics’ re-released BackBeat GO 3 wireless earbuds, which offer comparable sound quality thanks to re-sized ear gels to prevent audio leakage, though they can’t quite match the X3 in battery life. The NuForce BE Sport 3 also match up well as far as sound quality, and at a lower price to boot, but the fit of the X3 gives them an edge in our book.

It’s always a question when it comes to a gadget that will be subjected to regular doses of sweat, and it’s a tough one to nail down because every user is different. If you aren’t a runner or gym rat, it’s likely you won’t run into problems — the warranty document repeatedly refers to “perspiration,” indicating that is where the lion’s share of returns would come from. The earbuds are good at handling sweaty workouts, but some maintenance can go a long way in avoiding a malfunction.

Yes. Exercise fans who want to cut the cord at a reasonable price will not be disappointed by the X3.