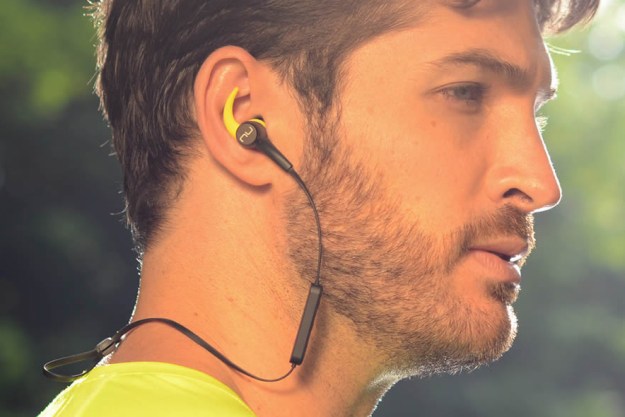 “The Optoma NuForce BE Sport3 offer solid sound and a firm fit for a great price.”

These days, it’s no longer a matter of who makes Bluetooth earbuds, but rather who doesn’t make them. The last few years have seen vendors ramp up efforts to cut the cord, and with Apple dumping the headphone jack in its iPhone 7 models, going wireless has become more than trendy.

At $80, the BE Sport3 are what you might call classic earbuds, except for the Bluetooth wireless part. There are no health trackers or companion apps here, just pure tunes in a design that allows them to stay put admirably during a sweaty workout. The word “sport” still figures prominently in the Sport3 thanks to how they are targeted at active and fitness-conscious users who want tunes, and Optoma looks to offer plenty of bang for the buck.

Sliding the contents from the outer packaging, the earbuds are found nestled in a smaller box within. A larger box holds a carrying case (with carabiner clip), and a very short micro-USB charging cable. Also inside are a panoply of ear tips, including a baggie with Optoma’s special black and yellow SpinFit TwinBlade ear gels in three sizes, another with regular neon yellow and neon orange ear gels in three sizes each, and yet another with ear wings in two sizes.

At the bottom is a flap that houses the documents. The manual looks like a comic book without any word bubbles in that instructions are purely visual, with context provided by symbols and other indicators to denote what goes where. The other document is a safety guide in various languages. A more detailed user guide is available for download through the Optoma website.

As you might expect in a lower-priced pair of wireless buds, Optoma kept things simple. The BE Sport3 aren’t flashy earbuds, no matter how much neon you put on them, but that’s partly the point. They are designed to be a workhorse for the wearer who expects them to keep playing during a punishing workout.

The BE Sport3’s sensor-free design serves up an impressive 8 hours per charge.

The earpieces are magnetic on the back — a useful way to keep them together anytime they aren’t in use, be it around your neck or in the carrying case. It also helps to keep tangling issues at bay. The build is fairly basic with room to wrap wings onto the main body, and protrusions to mount the ear gels. The wings, which fit into the top of your ear to hold the buds in place, are easy to figure out as to which side to put them on because the hole is angled in such a way that it fits perfectly with the orientation of each bud. Indented L and R symbols on the inner side of each bud note the direction to wear them.

The sides are joined by a fairly long cable that easily wraps around the back of the neck, or dangles in front like a necklace. An inline three-button mic piece with playback controls adorns the right side of the cable. Holding the main button for about four seconds powers them on or off. A single press plays/pauses music, or accepts or rejects a call. The volume buttons can also skip or go back a track by holding either one down for about two seconds.

The buds aren’t fully water resistant, but the IP55 rating does mean they’re resistant to rain, sweat, and dust. Our review unit was also one of two color options. There’s also joined by a rose gold version with a white cable, with clear, pink or teal ear gels and wings.

The BE Sport3 go into pairing mode right after being turned on for the first time, making that process painless. Holding down the main button on the inline mic piece for six seconds until the tiny LED blinks red and blue pairs the headphones with another device, or repairs them to yours.

Triggering Siri and Google Now automatically through the inline controls requires pressing the main and volume up buttons at once. The included guide doesn’t make that obvious, so we figured it out by looking at the user manual online. Preloaded voice prompts pop in when needed, including when powering on or off, when battery level hits 50 per cent, when battery is low, when the device is connected, and for voice dialing. These are on by default, but can be turned off by holding the main and volume up buttons simultaneously for two seconds. Doing the same again will turn them back on.

The winning fit, at least for us, was using the TwinBlade ear gels with a medium-sized ear wing. We rarely had to adjust or squeeze them back in to tighten the seal, no matter what we were doing. While they did get a little more slippery after breaking a real sweat, the rare adjustment never felt like a chore.

We’ve had up-and-down experiences with Bluetooth earbuds in the past, but came away stunned at how good these sounded. Particularly, it was the lows that came through far better than we anticipated, suggesting that the bass-loving crowd may want to take a look at these before plunking down more on anything with a Beats logo on it.

At this price point, the BE Sport3 obviously aren’t aiming for audiophile-grade sound, but you’ll get a better balance with these buds than some models that are double the price. The tighter seal is the key reason why, reducing leakage and letting bass and lower mids come through without being overtaken by the higher registers.

Tweaking a digital EQ could help make the earbuds sound better, especially when the lows don’t need to be bolstered as much, but there isn’t much to complain about. Different genres come through more than adequately, and based on their audio performance alone, the BE Sport3 doesn’t just tailor to the athletic crowd. Even with the sporty moniker, basic headphone cord-cutters will benefit from these buds as much as anyone.

Battery life is also impressive. By not cramming in anything extra, like sensors, the BE Sport3 are able to last at least eight hours, reaching as high as 10 hours when volumes are consistently lower.

Like any pair of Bluetooth earbuds that take a sweaty beating, it’s hard to say how long the BE Sport3 might last before something internally starts to degrade and stop working. The gels are pretty rugged, but replacing the TwinBlade ones may be necessary after repeated use.

Optoma offers a one-year warranty covering parts and labor for repair and replacement.

Bluetooth wireless earbuds can’t match the audio fidelity of a wired pair, but when sound comes through well enough without being tethered — and they stay in place while being active — you have a good combination. The BE Sport3’s $80 price tag only helps solidify the point further.

Neon colors aren’t for everyone, so at least there are neutral options to cut the flash if you don’t it. The main takeaway is the fact they sound good and don’t wiggle too much. That’s what sporty Bluetooth earbuds should do, and we would have no problem choosing these as our running companions.

Not all wireless earbuds are expensive, and some others definitely fit in the affordable category. The Skullcandy Ink’d Wireless are better than they look, and can be purchased for as low as $40.

Another option in a similar price range to Optoma’s unit is the Jabra Sport Pace Wireless. Unlike others from Jabra, it doesn’t have any sensors built-in, but offers good audio quality. Sol Republic has also entered the fray with its Relays Sport Wireless for $80.

For more money, the LG Tone Active could be an option to consider.

Gauging the durability of any given pair of wireless earbuds is hard because it depends on usage patterns. Excessive sweat makes them more susceptible to damage over time, whereas leisurely use should make them last longer. The NuForce BE Sport3 are not the most rugged, but they have a nice build, and are clearly designed for the active user dealing with perspiration.

Questions over durability, notwithstanding, these earbuds sound better than many others that are more expensive. You might have to replace them at some point down the line if they take a beating, but they are solid if you just want good sounding tunes to flow into your ears without the wire clutter.

Best AirPods deals for September 2022: AirPods and AirPods Pro
Apple AirPods Pro 2 vs. Google Pixel Buds Pro
Apple AirPods Pro 2 vs. Samsung Galaxy Buds 2 Pro
Nothing teases its next wireless earbuds with photos of a lipstick-like case
2022’s best TVs for under $1,000
Amazon saw 15.3 million watch Thursday Night Football on Prime Video
How to watch Pittsburgh Steelers vs. Cleveland Browns on Thursday Night Football
The best wireless earbuds for 2022
Thursday Night Football stream struggles continue for Prime Video
The best Roku TVs of 2022: which should you buy?
The best 4K TVs for under $500: premium picture on a budget
The best speakers for 2022: great hi-fi options for music and more
Best new movies to stream on Netflix, Hulu, Prime, HBO, and more