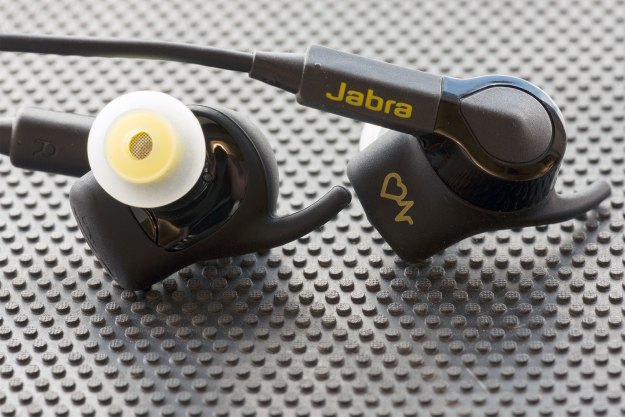 “If you’d rather your fitness wearable live in your ear than on your wrist, the Sport Pulse SE are the premiere choice.”

Jabra’s Sports Pulse Wireless wowed us with their ability to incorporate an in-ear heart rate monitor for enhanced fitness feedback, but they left us a little flat when it came to sound quality and fit/security. With the latest version of the Sport Pulse Wireless, the new buds get a “Special Edition” moniker, hopefully shoring up those shortcoming for a truly top-notch fitness headphone. We broke a sweat more than a few times to see how special they truly are.

The new product’s packaging and contents is virtually identical to the original, with a flap that opens to reveal the earbuds underneath. Below that is a compartment with four sizes of “earwings” for security, and three sizes of silicone eartips, along with a new inclusion: three sizes of Comply Foam tips. We also found a short micro-USB cable to charge the earbuds, along with four plastic FitClips used to keep the cable from dangling too much.

Last year’s model had a respectable zip case with a semi-hard shell, but this time around Jabra cheaped out on a pedestrian nylon pouch. A quick-start guide comes in a sleeve with warranty information and a sheet with a QR code to download the Jabra Sport Life app for iOS or Android.

Since Jabra was looking to build on an existing foundation rather than fix something hopelessly broken, there is little deviation between the Special Edition and its predecessor. The resemblance — at least on the surface — is so close it would be easy to confuse the two. What Jabra did structurally to improve fit is unclear, unless we factor in the very pliable Comply Foam tips.

Most everything else is just as before, too. The cable linking the two earbuds is the same length, the inline remote and mic are in the same location, the heart rate monitor is in the left earpiece, and the micro-USB port in the right. So, what’s changed?

Most of the differences are internal. Jabra says it sought to address sound quality complaints, but hasn’t gotten into detail on what it actually did – perhaps new drivers or re-tooled signal processing?

From the feature side, Jabra added the ability to calculate VO2 Max level – referring to the maximum volume of oxygen an athlete can use. Jabra says this metric is calculated by sending the earbuds’ in-ear heart rate monitor data to the Sport Life app where it performs some calculations and presents the result to the user via built-in voice coach. It sounds neat, but could it be accurate?

To get the Sport Pulse Wireless SE up and running was no different than before. Upon first turning them on, they went into pairing mode. A voice prompt confirmed pairing with a smartphone, and so, we set about launching the Sport Life app to complete setup. It didn’t take long for it to detect a heart rate and confirm it through the onboard voice coach.

The same resting heart rate test, where we lay back and relax for two minutes, is back and worth trying when possible. Jabra recommends doing it in the morning before eating or drinking anything, but we also liked trying it before bed. The orthostatic test, which required laying down for 15 minutes, and then standing for 15 seconds, is also back.

The better fit and sound quality is owed primarily to the included Comply Foam tips.

There is no built-in GPS, so the Sport Pulse Wireless SE leverages the paired phone’s GPS to get relevant location data to calculate distance covered.

The single button on the left earpiece also functions the same as before: A long press initiated a workout, with a short press prompting the voice coach to itemize time elapsed, current heart rate, and what training zone we were in. During a workout, it will call out milestones or awards, and when it’s over, it runs down all the pertinent metrics.

One annoying quirk we noticed every time with the latter was that music wouldn’t come back on again afterward, thereby forcing us to manually get it playing again. We also started to get back in the habit of closing the app completely from the background after using it for a workout because it otherwise wouldn’t recognize the in-ear heart rate monitor. Not a big deal, but it was something we became aware of whenever the app had been left idle for too long.

Audio fidelity was unquestionably the one area Jabra needed to improve from the original, and we were pleased to hear that they (mostly) delivered. The original model was plagued with sound leakage that effectively nullified the lows in the audio spectrum, to the point where some songs sounded a little tinny.

Now, with the Sport Pulse Wireless SE, passive noise isolation helped drown out some of the background, while a noticeable bass boost in the drivers added some of the thump that was missing. The result isn’t a massive swing in the right direction, as we found the seal weakened under stress and sweat.

Indeed, the slight improvement to fit is half the battle, but without some sort of audio boost to back it up, we’d have been less than impressed. Thankfully, the sound quality is better, but we still hoped for a little more low end.

The better fit and sound quality is owed primarily to the included Comply Foam tips. They did a better job of isolating noise by providing a better seal, and they stayed put, too. Intense workouts will take their toll over time as they can warp and degrade. Jabra has three sizes in the box, but long-term use of the Sport Pulse Wireless SE almost certainly means replacing the foam tips periodically.

We also noticed an improvement with phone calls, too. We noticed clearer reception and voice quality on both ends when chatting with people.

Battery life is esentially the same as it was with the original model; the louder the volume, the shorter the run time. We averaged about four hours per charge, which is neither great nor terrible for Bluetooth earbuds.

Interestingly, Jabra is offering a three-year warranty for damage caused by sweat. A one-year warranty is already standard, but to qualify for the additional two years requires registering the Sport Pulse Wireless SE through the Sport Life app, which only takes a few minutes. Doing so also offers the choice to opt in for notifications about new firmware updates.

Jabra fixed what was ailing the original Sport Pulse Wireless by doing something about the audio quality, and improving the fit and finish of the product. It’s not common to find a heart rate monitor in a pair of Bluetooth earbuds as it is, and firmware updates via the Jabra website should improve them further.

Bluetooth earbuds are slowly becoming more of a competitive sub-category in the headphone space, so alternatives do vary, depending on what you’re looking for. Sound quality is still objectively better in Jabra’s Sport Pace Wireless,  but you lose out on the heart rate monitor and any other major tracking features.

The Sport Pulse Wireless SE do continue Jabra’s tradition of compatibility with third-party apps, like Strava, Endomondo, RunKeeper, Runtastic and MapMyFitness, among others. As a fitness product, we were already sold on these, as they were.

The three-year warranty is one of the smartest additions to this special edition because it addresses questions over durability and longevity. Jabra’s Bluetooth earbuds have been hit with negative feedback on that in the past, so this should add some peace of mind when breaking a sweat repeatedly while wearing them.

Firmware updates, which the company doesn’t make especially obvious unless you register the product with them, will play a role in enhancing or upgrading the Sport Pulse Wireless Special Edition over time, so there’s no telling how much better they could get. The Comply Foam tips are a welcome addition for what they bring to the table — just expect to have to buy more as replacements if you plan to wear these often.

Currently available for $160, which is less than the previous Sport Pulse, the Special Edition offer a solid mix of fitness features for a decent price. If you’d rather your fitness wearable live in your ear than on your wrist, the Sport Pulse SE are the premier choice.