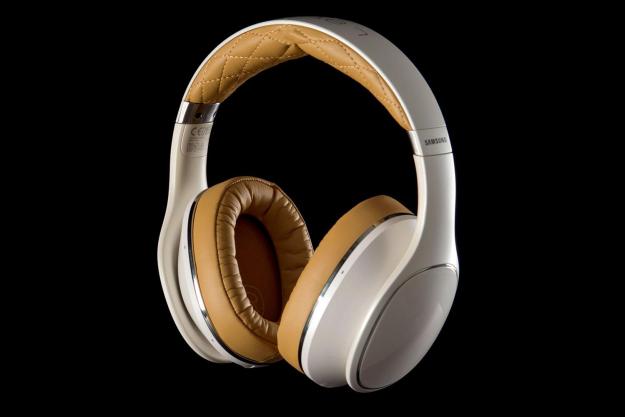 We’re surprised it took this long for Samsung to come forward with a line of premium headphones. We’re also shocked the company didn’t seek out some sort of celebrity endorsement when it did (there’s still time). After all, when you’ve got pockets as deep as Samsung’s, it must be tempting to throw a bunch of money at the marketing department and let them work their magic.

Yet Samsung’s announcement and promotion of its new Level headphone line has been with little fanfare. Save for a clever commercial featuring David J, it seems the company – not exactly revered for stellar audio products – is content to rely on its wares’ merits rather than the empty endorsement of a footballer or R&B star. As much as we appreciate that, we were skeptical going into this review. Then we tried on the line’s full-size over-ear headphone, the Level Over, and our attitude was adjusted to one of optimism.

Outfitted with slick touch- and swipe-control features, an understated yet classy style, and surprisingly solid noise-cancellation, the Level Over isn’t just a phoned-in offering to the now-requisite headphone market, it’s a totally respectable set of cans. But are they right for you?

The Level Over is a big pair of headphones, and the first hint at that is the case that they come in. On the plus side, the case is well reinforced to keep the ‘phones from getting crushed in luggage or backpacks, but it’s bulky. The case’s girth can be attributed to the fact that the Level Over don’t fold down for compact storage.

Inside the case is an oval-shaped zippered pouch which conveniently fixes to the case’s lining thanks to Velcro backing. Inside the case is a headphone cable with three-button inline microphone, a USB charging cable, and an airline adapter.

Samsung is usually pretty good at differentiating its products from the competition, and that’s certainly the case here. Looking at the headphones, you’d never know they are packed with on-board controls. On the outside of the right ear cup – where many a brand logo are often found – Samsung has placed touch controls, with no markings marring up an otherwise gleaming finish. Users can swipe up and down to adjust volume, forward and back to advance or reverse tracks, and press/hold to play/pause or answer phone calls.

The only buttons you’ll find on the Level Over are for power and Bluetooth/noise cancelling. One of our favorite features is an auto-off function which kills the ANC (active noise cancelling) and Bluetooth chip if the cans go unused for a period of time. This kind of battery-saving measure is hard to find, and a seriously welcome inclusion by Samsung.

There is a catch, though: The swipe control features will not work with non-Samsung devices via wired connection – Bluetooth only. Also, the inline microphone’s controls for volume up and down will not work with an iOS device – only the play/pause button (which also answers and terminates calls) works.

Samsung claims the Level Over’s battery is approximately 15 hours. Based on our experience, that is a conservative estimate. On a recent 16.5 hour trip to Germany, the headphones endured nearly constant use, and came out the other side with power to spare. Unless you crank these things to maximum volume with both Bluetooth and ANC engaged, you’re not likely to kill them inside 15 hours, and we consider that excellent.

Bluetooth range was also superior. We got about 50-60 feet away from our iPhone with line of sight before we experienced any cut-out.

The Level Over are surprisingly light headphones, especially considering their size and feature set. For a set of cans with such lengthy battery life, we’d expected extra heft, but somehow Samsung kept them breezy, and that helps contribute to a comfortable fit, even for long-term use.

It doesn’t hurt that both the headband and ear cups are amply padded, either. Add in moderate amount of clamping force, and you get a headphone you can easily wear for long-haul trip or a full day at the office. In fact, our video producer routinely wore them for 6+ hours a day with little to no fatigue.

As long as you aren’t a super-picky audiophile, you’re going to think the Level Over sound great. But even if you do have a healthy appreciation for good sound, we still think these ‘phones are worth checking out. We could spend a few paragraphs nitpicking about the particular flavor of treble Samsung decided to go with, but we’re pretty sure it would fall on deaf ears. Instead, we’d prefer to concentrate on what the Level Over do well and, just as importantly, what they don’t do wrong.

What you won’t get with these headphones is skull-thumping bass or overly-hyped treble. What you do get is smooth sound, top to bottom. We were also pretty pleased with the Level Over’s ability to express dynamics and detail. Stereo effects are pulled off well, too. The whole presentation is somewhat laid back, but not at the expense of clarity. You’ll even get a few surprises in the form of well-exposed transients and quick, transparent upper midrange.

You don’t get skull-thumping bass or overly-hyped treble, but you do get smooth sound, top to bottom.

For example, when we listened to Bruno Mars’ Treasure, we were pleased with the way Mars’ vocal rose just above the heavily-produced (and very forward) backing tracks. This song can sound a little crowded on lesser headphones, but the Level Over managed to segregate each musical layer well enough that we could tune into any instrument we wanted and track it throughout the entire song.

We also appreciated that the background vocals in the aforementioned song seemed to come from the back side of the ear cups, as if the track was pushed to the outer edges of the sound stage. The stereo effects and sound staging were also displayed well when listening to Chet Faker’s rendition of No Diggity. We could easily trace the whole production throughout a virtual dome of sound around our head.

The Level Over’s bass response, while not heavy handed, is in no danger of being characterized as anemic. We appreciated getting just enough thump from kick drums and plenty of extension from electric bass – enough for us to sit up and take note whenever a bass player would bottom out on their B string.

Midrange, as we explained earlier, is never covered up by the bass or colored by the treble. Voices always sounded natural and just a little bit forward, with plenty of detail around sibilant sounds, but never any harshness. We also appreciated the tight knock of drum sticks on cymbals and the snap of a kick mallet hitting a bass drum head.

Treble response was always controlled, and sparkling enough to bring some detail. Occasionally the ‘phones would clam up when trying to expose the full spectrum of overtones in trumpets or piano, but we appreciated not having to deal with anything one might characterize as tinny or strident.

The Level Over are a totally approachable headphone with enough panache to get most listeners excited about exploring their music collection in a quest to hear something they hadn’t before.

Overall, we’re impressed with Samsung’s first proper full-size headphone. Aside from being a bit bulky and not being as travel friendly as we’d like, the Level Over are a compelling option in a crowded arena of headphones. With top-notch battery life, impressive wireless range, and sound quality that should more than satisfy all but the most ardent audiophile, the Level Over are worth a serious look for commuters and office workers alike.

Topics
Best over-the-counter hearing aids for 2022
The best home theater projectors you can buy in 2022
The best TV brands of 2022: from LG to TCL, which should you buy?
Best headphones for 2022: Sony, Bowers & Wilkins, and more
A perfect gift for Apple fans, AirPods Max are $100 off today
Turn up the volume with the SVS Prime Wireless Pro speakers
The best romance movies on Netflix right now (December 2022)
Apple Music Sing brings karaoke singalongs to iPhones, Apple TV
The best stand-up comedy on Netflix (December 2022)
How to buy over-the-counter hearing aids
The best shows on HBO Max right now (December 2022)
Amazon Echo Show 15 is getting the full Fire TV update today
50-inch Samsung Frame TV is $400 off — but hurry