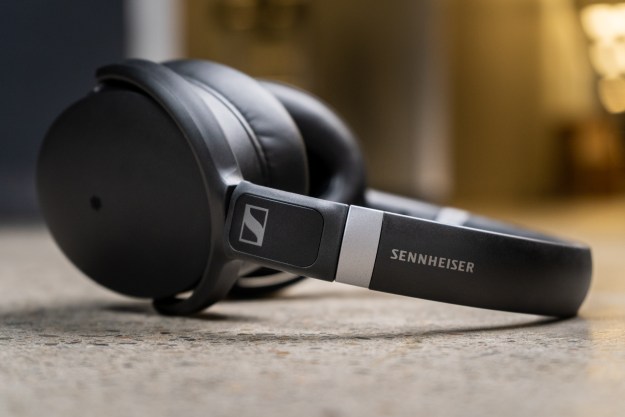 “Impressive features, style, and noise cancellation add up to a worthy option for budget shoppers.”

Increasingly, high-end travel cans like Sony’s indelible WH-1000XM3 are a fundamental necessity for commuters and travelers alike. But if you can’t cough up $300 to 400 (or you can’t find a good sale), is it possible to get a pair of wireless cans that bring the same goodies — from active noise cancellation to killer battery life and sound — for less?

Headphones like Sennheiser’s HD 450BT hope to make the argument that you can spend less and still get a lot. And on paper, the latest iteration makes a good case. Offering noise cancellation, a whopping 30 hours of battery life, and plenty of other features, the $200 450BT spell value with a capital “V.” But before you click the buy button, you’ll want to know exactly where the rubber hits the proverbial road for these midrange cans.

The look (and feel) of luxury

If there’s one thing you can unequivocally say about the HD 450BT, it’s that they look the part. Dressed out in matte black, with soft touches of silver to break up the monotony, the 450BT have the “business traveler” look down cold, with just enough style points to keep you from nodding off. In other words, their aesthetic takes after most flagship headphones, including the aforementioned Sony pair.

What’s more, the 450BT’s matte-plastic earcups and headband feel the part, too, as do the cushy earpads cloaked in inviting faux leather. The one reservation is the padding on the headband’s underside, which feels a lot less cushy to the touch than you’d want for a long flight or constant commuting. That said, while the band didn’t cradle my head in pillowy goodness, it never felt uncomfortable either, even after wearing them for a few hours. The only slight quibble I’ll offer is that I wish the earpads were just a shade wider, but it wasn’t something that bothered me.

Rather than adding pricey touch controls, the HD 450BT use an all-buttons control system. It works relatively well overall, but there’s a real learning curve. There are technically just four buttons, all on the right earcup, but that includes three multi-use keys comprising a power/pairing/ANC key, a volume rocker, and a multi-button key that does everything from answering calls to skipping tracks.

It’s that last key that proves most vexing as you fumble your way through the succession. Not only is it rather awkward for song skip (I found a quick flip of your thumb works best) the skipping works backward from what’s logical. Flicking the key forward — that is toward your face — actually skips back, and vice versa. After over a week, I mostly have it down, but I still mix them up on occasion.

The voice assistant function is a great inclusion, but there’s also something odd to note there. I’m actually glad Sennheiser made this the lone single-function key, but it seems to do two things by accident. When tapping for voice assistance, the headphones also pipe in ambient noise. The odd part, though, is that there doesn’t seem to be any other way to do that, meaning you’ll need to take the headphones off if you want to hear things like train or flight attendant announcements. I’m hoping this may be something Sennheiser addresses in a firmware update.

The full feature array would have been reserved for top-shelf headphones just a short time ago.

Still, even without transparent sound, a suite of features that includes instant voice assistant access, battery life to outlast your longest flight (and pricier headphones like Bose’s 700), solid noise cancellation, aptX support for compatible devices, and more is impressive. Such an array of extras would have been reserved only for top-shelf headphones just a short time ago.

What you don’t get

While the HD 450BT punch above their weight in the feature department, there are some useful ones you’ll definitely miss. There’s no auto-pause, for one, which is useful for quickly pausing music when you remove an earcup, and also lets you set down the headphones mindlessly without worrying about battery drain.

Having grown accustomed to this feature on everything from the WH-1000XM3 to Apple’s AirPods, I constantly had to remind myself to manually pause music.

Also, Sennheiser’s Smart Control app is, for these headphones anyway, pretty useless. The only real feature is an EQ, but I’ll give you my audio engineer certificate (I have it somewhere, I think) if you can figure out how to use it. An esoteric glowing band, it’s unmanageable for properly tuning sound. How about just putting in a basic parametric or graphic EQ, guys?

A mix of passive and active noise reduction keep outside annoyances at bay.

While I wasn’t able to use the HD 450BT for the traveling holy grail — a long flight — I can report from that they do a solid job of keeping out unwanted sounds in a variety of settings. This seems to be due to a clever combo of passive isolation and active noise cancellation that keeps your listening sessions unfettered, and outside annoyances at bay.

On their own, the cushy pads block plenty of unwanted bustle, while engaging the noise cancellation adds an extra layer to cut out engine hum and other droning sounds fairly effectively. While they won’t be a substitute for the WH-1000XM3 — which even add pressurization control for extra points — or either of Bose’s top picks in the genre, the 700 or QC35 II, the HD 450BT will certainly add some peace to your travels.

These being Sennheiser headphones, the oddest part of my HD 450BT experience was the inconsistency in sound quality I experienced during my listening sessions. Let me say first and foremost, the headphones offer balanced, relatively detailed sound, and they also do a good job of presenting instruments without “masking,” meaning instruments rarely get lost in the mix.

I also particularly enjoy the 450BT’s bass response. For someone who hates bass-heavy cans, they are perfectly restrained, and yet they present the tone and color of everything from kick drums to bass guitar with vigor and clarity. Paul McCartney’s exquisite bass tone on Something is revealed in all its smooth, chocolatey glory. And while bass never gets overpowering, it hits heavily where it needs to for hip-hop and electronic tracks.

The presence I expect from Sennheiser in the midrange and treble is lacking here.

While the lighter color affected most tracks, a prime example of the latter can be heard in Vampire Weekend’s Married in a Gold Rush. Danielle Haim’s vocal is pressed down in the mix, while her initial entrance sounds a lot more like “Fshared a moment in a cafe” than “Shared.”

Again, this wasn’t always the case. Some songs were rendered with enough clarity to keep me pausing over my previous notes. But overall, the presence I expect from Sennheiser in the midrange and treble is lacking here, as is the ruddy warmth of the lower mids, which is something of a Sennheiser specialty.

It could be said that I’m being tough on the HD 450BT’s sound quality for their price, and if so, I’ll take the heat. Fact is, you can often grab a pair of our favorite wireless cans in the business right now, the WH-1000XM3, which rightly keep creeping back into this review, for as low as $250. And frankly, they outperform the HD 450BT in clarity, instrumental definition, soundstage, and detail.

For most tracks, the HD 450BT do a fine (if limited) job delivering the goods, and less picky listeners will likely be satisfied.

Sennheiser offers a generous two-year warranty on most products, including the HD 450BT. For more information, check out Sennheiser’s website.

Sennheiser’s HD 450BT aren’t the best value in the business, but at just $200, their impressive feature set, stylish looks, and solid noise cancellation add up to a worthy option for those looking to dip into high-end travel cans without the high-end price.

Is there a better alternative

If you can shop around for a deal, yes. Whether it’s the WH-1000XM3 or the QC35 II, it’s the aging guild of travel cans that offer the best value for your money these days. Is that Sennheiser’s fault? I’d say no, and any new pair of cans is going to ask a premium over headphones that have grown long in the tooth. What’s more, with 30 hours of battery and plenty of style and comfort, the HD 450BT are worth consideration.

Still, if you want to make a splash in this competitive segment, you’ve got to give people every reason to cast away the flagships, and the HD 450BT aren’t quite there.

If $200 is your ultimate budget cutoff (or even a stretch), then yes. Their noise cancellation and extra-long battery alone are enough to put them in the conversation. But if you can creep a bit higher, it’s worth looking for a sale on the flagship models, as that’s where the serious value lies. At least, until the next models hit and they’re discontinued.