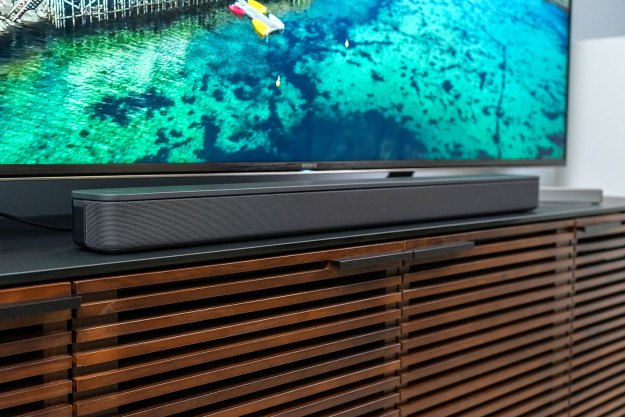 Over the last few years, the entry-to-midrange soundbar market has become pretty crowded. It turns out a lot of people want a system with tons of features, versatility, and really great sound for their new flat-screen TVs — without having to tap their savings twice. Who knew?

Sony’s latest contender, the 2.1-channel HT-S350, comes in hot with seriously bombastic sound thanks to a claimed 320-watt power plant. While this system is loaded with plenty of power for your favorite cinematic moments, it has some trouble competing with the best soundbars when it comes to balancing the finer details.

The HT-S350 arrives in the usual L-shaped box common for most two-piece bars. It opens like an angular cocoon to reveal the bar and accompanying wireless subwoofer inside. The bar is lighter than we expected, with the vast majority of the system’s 24-odd pounds loaded into the wireless subwoofer. The sub is by far the stoutest piece of the puzzle (unsurprisingly), bearing a front-facing woofer behind a hard-mesh screen and a bass port just below.

In the package, you’ll also find a digital Optical cable, a bag with instructions and batteries, and, after you’ve put the box away, a slender remote wedged into the bottom of the Styrofoam that looks like a massive Tootsie Roll.

What can we say about soundbar design? There’s just not much to these things when it comes to style, as they’re usually aimed at disappearing beneath your TV. The HT-S350’s bar distinguishes itself to some small degree with rounded corners and a dimpled top panel that’s meant to look like amp-cabinet vinyl (but definitely doesn’t feel like it). There are also touch controls on top for power, volume, Bluetooth, and source switching.

Setting up the HT-S350 is brilliantly simple.

The candy bar-shaped remote is dotted with plenty more buttons, with keys for volume, subwoofer level, and multiple sound modes including Music, Game, News, Cinema, Sports, and Standard. There’s also an Auto Sound key designed to adjust the system for the best sound depending on what’s being played, a Voice key to juice dialogue, and a Night Mode key to allow for better balance when you need to cut the volume. Unfortunately, there’s apparently no way to adjust treble or bass, but that’s not surprising at this price.

On the bar’s backside is an IR repeater in case it blocks your TV’s IR sensor, and a cubby for connection ports. The HT-S350 hosts just two hardline connections, though they’re the ones you’re most likely to need, including digital ports for HDMI ARC and Optical connection. This is the first soundbar we can remember encountering with zero analog inputs, meaning you won’t be able to connect a turntable or that aging TV without an adapter.

Bluetooth offers a way to connect wirelessly to newer Sony TVs, as well as stream to the soundbar from your phone. There’s no Wi-Fi support, though, which would have been nice for higher-quality music streaming, but again, we’re not surprised it’s missing at this level. Unlike our favorite soundbar in its class, Yamaha’s YAS-207, the HT-S350 is also lacking a second HDMI port for directly connecting a Blu-ray player, streamer, or gaming console to allow the bar to handle audio decoding.

Speaking of which, the system only supports the very basic Dolby Digital and Dolby Dual Mono, but no DTS decoding, though it does offer Sony’s S-Force Pro virtual surround engine for a very basic expansion of the 2.1 soundstage during cinema playback.

The beefy subwoofer adds some serious punch to your favorite movies.

In keeping with the, er, minimalist theme, the HT-S350’s front panel offers no easy way to judge volume or subwoofer level. Instead of the simple bar of LEDs that’s employed by many affordable bars, Sony relies on a cypher of flashing lights to determine whether volume is in the middle, lowest, or highest ranges. It could be workable, ostensibly, if you memorized the manual (or kept it on hand), but intuitive it isn’t. That said, it won’t matter for video playback if you connect via HDMI ARC.

Setting up the HT-S350 is brilliantly simple, especially for TVs with HDMI ARC. Simply plug in the bar and subwoofer, connect a high-speed HDMI cable (not supplied) to your TV’s HDMI ARC port, and you’re likely done. This should also allow your TV remote to control volume, though in some cases you may need to engage ARC and/or HDMI-CEC in your TV’s settings menu and change the sound output to External Speaker or Receiver.

If your TV doesn’t have HDMI ARC, simply connect via the provided Optical cable, though that means you’ll need to add one more remote into the mix. As mentioned, newer Sony TVs can also connect to the bar via Bluetooth.

As referenced above, this system knocks out some powerful sound, especially when it comes to its beefy subwoofer, adding some real punch to your favorite movies. We had a fun time with John Wick: Chapter 2 as the icier topside leaned into the techno soundtrack and crashes of battered steel, and the subwoofer warmed up the multiple explosions, barrage of punches, and the torrential stream of bullets.

The system has some trouble with more toned-down TV programming, though, due in part to a sibilant touch in the upper midrange that can occasionally make dialogue and effects take on a shrill tone. This was intensified when using the Voice key, to the point where we simply abandoned it.

The soundstage is also rather boxy for such a long bar, which tends to condense both TV programming and music. You’ll get some finer details in that upper midrange — when it’s not too sharp — and we also found some better luck with the Music and Cinema modes than with other choices. Overall though, we would have loved a bit more definition and balance in the more delicate moments to go along with the bombast in the heavier scenes.

While Sony’s new HT-S350 has plenty of power on hand and easily outdoes your TV’s flat and scratchy sound, a lack of balance and desirable features keep it from elevating above the heady crowd of contenders in the midrange soundbar segment.

At this price point, the clear answer is Yamaha’s YAS-207. It has better sound, more features, and superior connectivity and sound-processing options, all at a very similar price point. There’s a reason it’s still our favorite all-around soundbar a year and a half later. There are also several other worthy options on our best soundbars list.

The HT-S350 is solidly built and offers modern connection options like HDMI ARC and Bluetooth (for Sony TVs only), so it should hold up fine for years to come.

No. There just aren’t enough features here, and the sound isn’t good enough to raise the HT-S350 above the top contenders in the entry-to-midrange soundbar market.

Check out other options and score one on the cheap by browsing through our collection of the best soundbar deals.