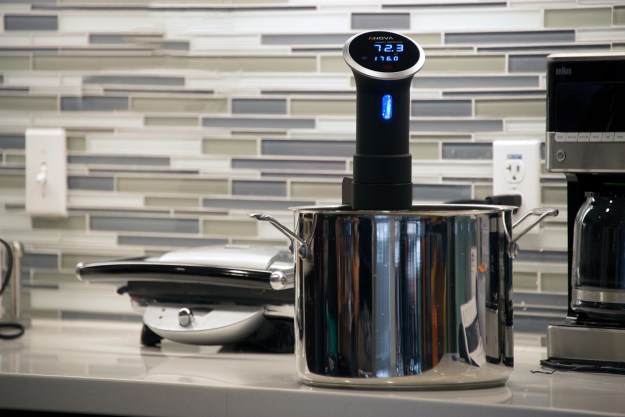 Back in the day — like 2014 — sous vide immersion circulators didn’t have Wi-Fi. Some didn’t even have apps. How did we possibly cook our steaks in such primitive conditions? Fast forward a few years and companies such as Anova and Nomiku have dropped the price and included more features in their sous vide devices. The Anova Precision Cooker Wi-Fi has internet connectivity, as its name suggests, meaning you can control it via an app even away from home.

The previous Anova was Bluetooth only, and we reviewed it back before its app was available. This version of the cooker looks almost identical, but the addition of Wi-Fi connectivity and an in-depth app are definitely welcome changes. Electrolux purchased Anova — yet another sign that sous vide is going mainstream. (Not sure what sous vide is? Here’s our explainer.)

Does the cooker add anything beyond connectivity? We took a few delicious weeks to test its full functionality to find out for ourselves.

The Anova probably looks like nothing else in your kitchen. Hand it to someone who’s never seen a sous vide device before and they probably won’t know how to work it. Just under 15 inches tall, the circulator has a long shaft and rounded bottom. Its LCD screen is on the circular top of the device, which comes with a clamping mechanism that holds it to practically any pot in your cupboard. The water’s temperature glows on the display, and the target temperature alternates with the cook time.

Minimum and maximum lines on the silver body of the Anova indicate where you should keep the water level. An LED-lit scroll wheel on the front lets you manually select the temperature, if you don’t want to open the app, and there’s a button for starting and stopping the device on the display. And that’s about it.

The newer version of the Anova connects to your Wi-Fi network, and its motor is 900 watts, compared with the Bluetooth model’s 800 watts. They both use the same app, which offers users guides and recipes for using the Anova. Though there’s only a single video tutorial in the app, setup is fairly easy. Once you download the app and plug in the Anova, the app will take you through the steps. If you want to forgo it entirely, you can just affix the device to your pot with the clamp, add water to your desired level between the min and max lines, and use the scroll wheel to set the temperature. It will beep when the water’s appropriately heated.

The app offers over 1,000 recipes, according to Anova, and you can either use the search function or filter by category. It also has a handy guide that tells you the time and temperature settings for different foods — such as corn, steak, chicken, and salmon. Most have more than one option, so if you like medium, it will give different values than if you prefer medium-rare. When you find a recipe or guide you like, just tap a button in the app to start the Anova preheating. Once your water is up to temperature, the device itself will beep, and you’ll get a notification from the app that it’s time to add your food.

It’s hard to suss out how well a recipe is going to work until it’s done, unfortunately. Each has a star rating, but there’s no way to see how many people have rated a recipe or if they’ve offered comments that could help a newbie or someone who’s never made cheesecake via sous vide before.

The setup is also a little strange; the sous vide part is listed under Directions, but if you have to sear a steak after or pop something in the oven, it’s listed under a tab called Finishing. Though a pop-up may prompt you to finish the recipe when the Anova’s timer is up, at least once we completely forgot extra steps in a recipe, as they were listed in the separate tab. It’s another thing to keep in mind with sous vide — it’s often not a one-pot meal. You’ll probably have to fry that steak for a couple minutes to get that Maillard reaction going, post-Anova.

During testing, I made a variety of food with the Anova, including steak, chicken, asparagus, pork, salmon, and scrambled and poached eggs, and I even turned vodka into gin in roughly 10 minutes. It took about 32 minutes to get 12 cups (96 ounces) of water from 49.4 degrees Fahrenheit (9.67 degrees Celsius) to 150 degrees Fahrenheit (65.56 degrees Celsius). I was cooking in a metal stock pot. As it was getting up to temperature, it fluctuated by a whole degree, but once it hit 150, I measured fluctuations of 0.2 degrees.

The device’s physical controls set it apart from some of the competition.

There are lots of sous vide cooking recommendations out there, and that’s why having a guide built into the app is so useful. It would be nice if it included even more categories; frankly, it’s very light on vegetables, with the only non-meat (or egg) recommendation being for corn. Like any new kitchen gadget, the Anova takes some getting used to, especially when your steak comes out of a bag looking sort of gray on the outside. It may take some experimenting to find out just how you like your salmon when it’s cooked via sous vide, but the app does offer descriptions on its guides, such as “translucent and starting to flake” versus “very moist, tender, and flaky.”

While the Anova immersion circulator doesn’t take up a ton of cupboard space, it could make a pretty big impact on how you cook. The gadget makes it fairly easy to get started, even if you’re a sous vide novice.

The sous vide space is exploding, and there are plenty of options if you’re looking to explore. If you don’t want Wi-Fi, Anova’s Bluetooth version is about $70 cheaper, for starters. At $200, ChefSteps’ take on the immersion circulator, the Joule, is smaller and more powerful than the Anova. Its main drawback is its lack of display and controls on the actual device — meaning you have to use the app to set your temperature. The bigger, bulkier Nomiku is $250, and we found its app a bit clunky. Instant Pot’s Accu Slim immersion circulator will set you back about $80 and has great reviews so far.

The Anova is well designed and made of quality plastic and stainless steel. As it’s Wi-Fi-enabled, it could get new features pushed to it — as with the Joule, which now works with Amazon’s Alexa. Expect the gadget to last, but it may be outdated sooner than you’d like.

Yes. If you’ve been looking to get into sous vide, the Anova is a great way to start. Its app is easy to use and has tons of recipes to choose from. Its motor isn’t the most powerful on the market, but the device does hold temperature very well. You can ditch your phone and manually control it, which gives it an advantage of the Joule.

Kitchen Appliance Package Deals: Save up to $1,670 today

Best microwave deals for May 2022