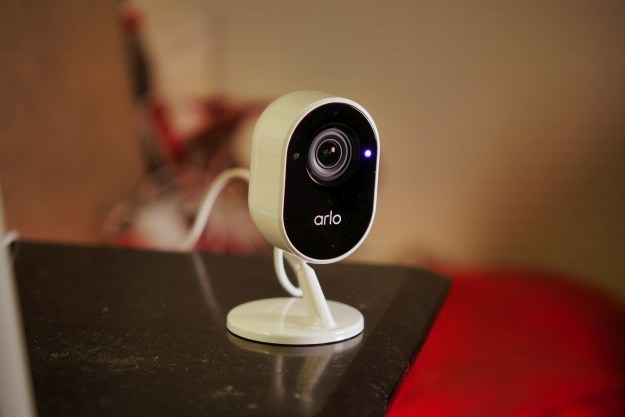 “You'll never have to wonder if Big Brother is watching thanks to the Arlo Essential Indoor Security Camera's helpful privacy shutter.”

Having distinguished itself as a high-end security camera maker for a long while, Arlo’s growth in the segment has been expanded thanks to the introduction of its Essential line of security cameras. With a balance between price and performance, the Essential line broadens the company’s reach. However, it lacked one particular type of camera — a proper indoor one.

Well, that’s all changing with the Arlo Essential Indoor Security Camera. On paper, it won’t dazzle anyone with its specs, but what’s really astounding here is the focus on privacy. Packed with a privacy shutter that opens and closes, it’s one of the few cameras that addresses the ongoing concerns about privacy in the home.

It’s difficult for security camera companies to employ some sort of privacy shutter, but Arlo, like a few other companies, shows us that it’s possible. The Arlo Essential Indoor Security Camera features a simple privacy shutter that covers the camera’s lens when you don’t want it to be recording — like when you’re at home. Unlike other implementations that require users to flip a switch, this one is mechanically actuated all through the Arlo app. This is great because you can be away and still control the privacy shutter.

It blocks the camera’s view, which protects your privacy in the home. This is important because there’s more peace of mind knowing that someone isn’t watching you. If someone does indeed access the camera, the privacy shutter’s action is accompanied with an audible sound — so you know it’s being accessed. This is useful because it’s distinctive enough that you’ll know it’s being operated without physically seeing it.

I’m a proponent of mechanically actuated privacy shutters like this, so bravo to Arlo for designing the camera with it in mind.

All the smarts, so-so quality

The Arlo Essential Indoor Security Camera’s design allows it to freely stand upright on shelves and desks, as well as be wall mounted using the included mounts. In terms of design, the all-plastic construction does make it feel a bit hollow, and it looks fairly generic, but the articulating base allows for quick and easy adjustment for the ideal view with the camera.

For an indoor camera, its 130-degree field of view is sufficient — I’ve seen other models with wider views — but strategically placing in corners will yield the best coverage. It records in 1080p resolution and features night vision and two-way audio — all the standard features you’d expect in a modern security camera.

However, many of its advanced features are locked away behind its Arlo Smart subscription. By default, the Arlo Essential Indoor Security Camera will send notifications when motion is detected, but you won’t get object detection, package delivery detection, or activity zones without subscribing to Arlo Smart, which starts at $3 per month for a single camera. Thankfully, there’s a three-month trial that’s included with the purchase.

As for the camera’s performance, it’s nice that Arlo Smart can distinguish motion from pets or people, so you can filter what you want to receive through the app and won’t be bombarded as much by false alerts. The video’s quality is average at best. It does suffer from some artifacting early on, but that seems to go away after a little bit of time. There are enough details to make out most things in the scene, while colors have a slightly more unsaturated tone to them. I have no complaints about its night vision performance. It’s crisp, clear, and illuminates the area as far as 20 feet.

One thing that could make it perfect

While I applaud Arlo for its mechanical privacy shutter, there’s just one thing the Essential Indoor Security Camera is missing that would make it perfect — a geofence feature that could automatically arm the camera when I’m away from home.

Currently, arming the camera is a manual process done through the app. Sometimes I’m just in a rush and don’t have time to arm the camera, so having a feature that could arm it automatically based on my phone’s location would sweeten the package.

If privacy is a top concern for you, the Arlo Essential Indoor Security Camera ensures that you won’t have to worry thanks to its privacy shutter. Its $100 cost is well worth it just based on the fact that it’s a camera you can trust.

Even though the all-plastic construction does make it feel a bit flimsy, there’s a one-year limited warranty that covers the camera for defects. Considering that it’s meant to be stationary in one place, it should hold up for a long time.

The SimpliSafe SimpliCam is worth considering just because, like this one, it features a mechanically actuated privacy shutter that you can see and hear. Its main advantage is that it works with SimpliSafe’s home-monitoring system, so it not only arms and disarms whenever the system is activated, but responders can even tap into the camera’s feed in an emergency situation to assess the event.

The Eufy Indoor Cam 2K Pan and Tilt is worth considering because of its lower cost and ability to articulate almost 360 degrees. It can even tuck its camera away when it’s not being used, which is a slightly different way of protecting privacy in the home.

Yes. It’s one of the few models that respects your privacy in the home, making sure that you’re informed when the camera is being accessed.