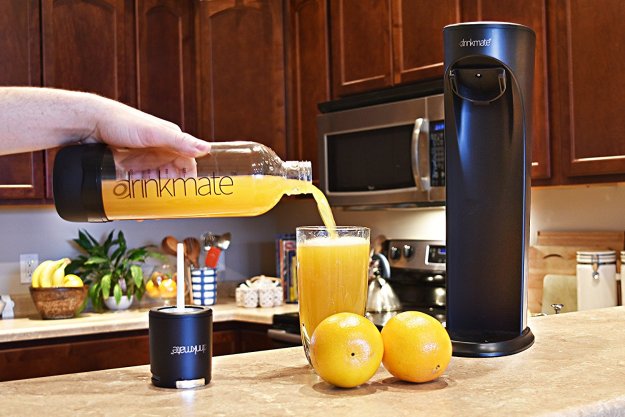 “If you’ve ever wonder what will happen if you put wine in your SodaStream, the DrinkMate is for you.”

A few summers ago, we started drinking what we liked to call “sham-pagne.” The recipe? White wine and soda water. The Ladies of London call them white wine spritzers. Either way, it’s a refreshing way to tone down the alcohol content of your drink in the dead of summer. But if you want your wine to stay at 12 percent, there is way to add bubbles without pouring in club soda: the DrinkMate.

Similar in style and function to the SodaStream, but it’s meant to fizzify beverages other than water. You can make bubbly wine and other carbonated beverages — but it’s not without its risks (and messes). SodaStream doesn’t recommend you do it, either. But iSoda’s Drinkmate promises you can carbonate juice, cocktails, wine, and plain old water, of course.

As with similar devices, the Drinkmate doesn’t require power. It uses a CO2 canister that you attach to the back of the machine. It comes with a plastic bottle, a cap, and a Fizz Infuser. That’s the name for the special cap you attach to the bottle when you’re ready to fizz. It has a tab you pull up to release the pressure in the bottle post-carbonating, so your wine doesn’t go spurting everywhere. You’ll want to keep an eye on how much liquid you put into the bottle (measurement lines help) and how long and frequently you tap the big silver button on top that injects the CO2 into the bottle. Some beverages get foamier than others; cold brew coffee, in particular, took a few tries to get right. It ends up looking like a rootbeer float with too many button presses, but that consistency is far better than just topping off iced coffee carbonated water (something we do every morning, regardless of the weather).

What makes the Drinkmate more manageable than a SodaStream is the Fizz Infuser’s tabs. There’s a slow release you flip up that will slowly release the pressure when dealing with beverages more finicky than water. If you’re impatient, you can hit the blue quick-release tab found beneath the slow-release. But be careful. The foam may quickly rise to the top of the bottle and start spitting out of the Infuser. That’s when you can close the tab and let things settle a bit. There were a few times — possibly because we hadn’t fitted the Infuser on properly — when the pressure caused the cap to pop open. The bottle was still attached to the Infuser, so there weren’t spills, but we did have to reattach the cap before trying to add CO2 again.

If you hate hand washing dishes, you should be aware that iSoda advises against putting the bottle in the dishwasher. It can’t handle high heat, so you might not want to rinse it in scalding water, either. That is one drawback, especially when you’re filling the bottle with things like coffee, juice, and beer.

We tested out a variety of beverages with the DrinkMate, from juice to cold brew to gin fizzes to wine, with varying results. Make no mistake: The DrinkMate isn’t going to turn white wine into champagne, but it did make mediocre boxed wine more palatable to non-wine snobs. You can’t put just anything in the bottle, though; the company recommends no-pulp OJ over the thicker variety, for example. The DrinkMate did an OK job of revitalizing a semi-flat beer, but it wouldn’t be our first choice for the machine.

“Why would I want my tequila fizzy?” a skeptical friend asked when we pulled out the DrinkMate during a recent weekend trip. She was making tequila cocktails, which called for sparkling water. Instead, we put all the ingredients in the DrinkMate’s bottle and started adding CO2. It’s not something you’d necessarily want to do with every cocktail, but it does give some drinks a bit more sparkle than just adding some soda water. You’ll still want to add plain water to the mix; otherwise your cocktail turns into a fizzy shot.

The DrinkMate comes with a 3-ounce canister, but it will fit 14.5-ounce varieties as well, according to the company. Right now, swapping an empty canister for a full one is only an option in Michigan, so you can either buy them on iSoda’s site or use a compatible SodaStream product. The 3-ounce canister ran out fairly quickly, after only a couple weeks of testing, but Target had larger SodaStream options on hand. The 14.5-ounce canister costs $30 but some stores will exchange your empty for a full one for half the price.

We’ve crunched the numbers before on buying SodaStreams versus just buying sparkling water from a store and found that you have to knock back a lot of fizzy stuff to break even. The DrinkMate definitely gives you a little more bang for your buck, because you’re not limited to just water.

DrinkMate offers a two-year manufacturing warranty on the machine and Fizz Infuser, but not the bottle.

Thanks to the ingenious tab system on the Fizz Infuser, the DrinkMate lets you carbonate practically any beverage you can think of. It’s not life-changing, but if you like bubbles in beverages other than water, it’s easy and effective.

Obviously SodaStream is the one to beat, and the DrinkMate tops the single-release-speed, water-only device. Still, if you’ve been looking for a SodaStream alternate for political reasons, you’ll probably still be stuck using its CO2 cartridges.

There’s an ongoing cost associated with this device — the CO2 cartridges — but the bottle won’t last forever, either. It has an expiration date a couple years in the future.

If you think you’ll start your morning with sparkling orange juice or foamy coffee (highly recommended), drink LaCroix like it’s going out of style, and are curious about trying a carbonated margarita, then the DrinkMate makes sense. If you only occasionally enjoy some sparkling water, it’s probably not worth the investment.

Best Keurig Deals: Get a K-Cup coffee maker from $90 today

How to get sports updates from Alexa