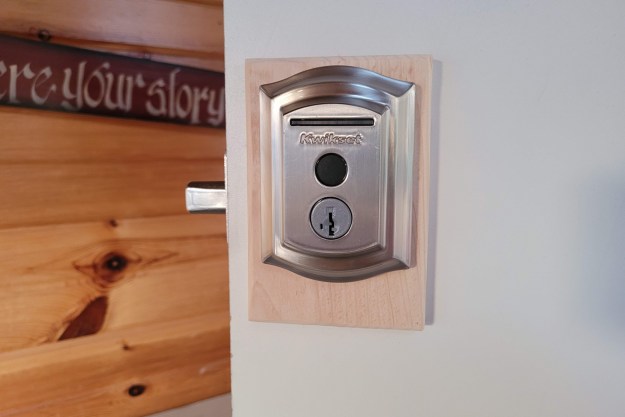 “The Kwikset Halo Touch let's you open your door with your fingerprint. It's all your spy movie fantasies come to life!”

You’ve probably seen your favorite actor walk the halls of a high-security complex, approach a door, and then place their fingerprint on a scanner to access the inner sanctum of some secret project. Maybe you’ve wished you could do that as well. As it turns out, Kwikset wished that same thing — and then made it a reality.

The Kwikset Halo Touch is a deadbolt with a built-in capacitive fingerprint sensor. It does exactly what Kwikset says it’ll do. Touch the fingerprint sensor with a registered fingerprint, and the deadbolt opens. Another touch with any finger closes it. An LED light stripe indicates the current action, whether that’s opening, closing, or signaling an unrecognized fingerprint. The deadbolt package also includes a rekeyable tumbler lock and two keys as a backup.

Right out of the box, Kwikset is doing things right. Setup and installation is very easy. The lock comes with boxes numbered 1 to 5, much like a Lego set. Start with box number one, and so on. I ran into a small issue because my front door only had a 1⅞” hole and the lock required a 2⅜” hole. That’s something to keep in mind if you plan to pick one up. I should also point out that the Halo Touch replaces your existing deadbolt, rather than working with it, which some people may find disagreeable.

Once the deadbolt is installed, you simply fire up the app. The lock first connects to your phone via Bluetooth, and from there connects to Wi-Fi. The Wi-Fi connection enables app notifications and remote control of the lock, and Bluetooth is required to do things like add users and change settings. That can be a blessing and a curse. While it’s far more secure to limit interactions to Bluetooth, it would be far more convenient to be able to do more over Wi-Fi. Given that a deadbolt’s primary purpose is security, however, I can definitely understand Kwikset’s mindset.

Once you have the app set up, it’s simply a matter of recording fingerprints for you and anyone else who wants to use the door. Again, this requires Bluetooth proximity, so bear that in mind. If you have a babysitter or house sitter coming by, you’ll need to be there when they register their fingerprints. Again, this errs on the side of security, so we can’t judge it too harshly.

The lock simply does what it is supposed to do. Nothing more, nothing less.

Once everything is set up, the lock does what it’s supposed to. Touch the sensor, and the lock opens; touch it again, it locks. The sensor is nonreflective, so you won’t see your fingerprint on the pad after you touch it. That’s a nice safety feature. You also have the option to set the lock to auto-lock after a given duration. The Kwikset Halo Touch also works with Alexa and Google Assistant.

The lock suffers from typical fingerprint sensor issues. If your finger or the lock itself is wet, the sensor will not work. The lock is rated against weather, so you don’t need to worry about the elements outside your home. But if you’re coming home in a rainstorm, it’s probably a good idea to have your key handy. It makes me wish there was another alternative here, such as an auto-unlock that uses Bluetooth and your location or NFC to allow you to open the lock if conditions aren’t right for a fingerprint sensor. You can open the app, and open the lock that way, but that’s a bit too cumbersome if you’re coming home and just want to go inside and take a load off. This is something Lockly does very well.

Finally, I’d like to see Kwikset offer some notification options. I don’t necessarily need a notification every time it locks or unlocks, but I’d like notifications when there are failed attempts at the reader. A little more customization in this regard would be great to help cut through the clutter.

Overall, I won’t judge a product on what I wish it did. I’ll judge it by what it does, and in this case, it does it perfectly. I had no problems with the lock during my test period, and I’m excited that fingerprint sensors on doors are becoming more common. Plus, Kwikset included everything you would want in a door lock built for the future.

If you want a fingerprint sensor for a deadbolt, this is a great choice. From easy setup (aside from having to remove your old deadbolt) to easy app setup, this lock meets or exceeds all expectations. There are some hiccups, but those are common to all fingerprint sensors, not just this one. Plus, it comes in two different styles and two different finishes so it can match your home.

As with any product, there are usually alternatives that might better suit your taste. The August Wi-Fi Smart Lock is much easier to install since it slides over your existing deadbolt. The Lockly Vision adds a camera and coded entry. But it you want a fingerprint-reading deadbolt that’s not complicated, this is a really great choice.

Kwikset has been in the door lock game for a long time, and it knows a thing or two about durability. It takes that philosophy to its smart home products as well. Kwikset has an entire website dedicated to the durability tests it puts its locks through. The lock I tested is solid metal, and I suspect that it will last for years.

Yes. This is a very solid product by a company with a history in this field. The lock simply does what it is supposed to do. Nothing more, nothing less. There are no hiccups. Some smart home products try to stretch their boundaries and do too much. This lock sticks with what it’s good at.