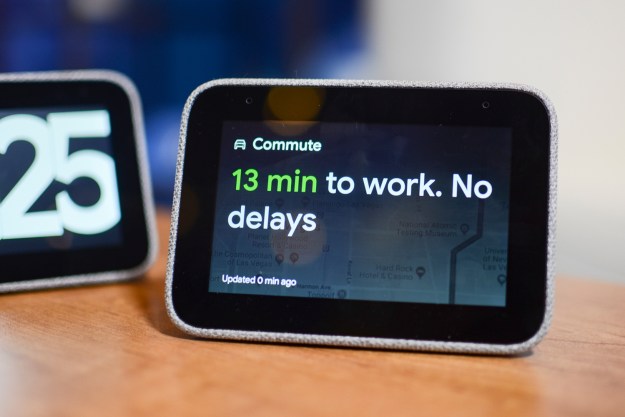 Over the past year, Lenovo has quietly made a name for itself as a maker of Google Assistant speakers that also feature screens. At CES 2018, it introduced the Lenovo Smart Display, a Google Assistant speaker with either an 8- or 10-inch screen that’s meant to rival the Amazon Echo Show. The devices were attractive and thoughtful in design and execution, earning them Digital Trends’ Editors’ Choice award.

Lenovo is continuing the trend at CES 2019 with the Lenovo Smart Clock With Google Assistant, a bedside alarm clock meant to rival the Amazon Echo Spot and, to some extent, the Google Home Hub.

Intended to sit on a nightstand or desk, the Smart Clock ($80, available in spring 2019) is a small, cameraless, cute addition to any bedroom. We got to spend some time with the device and came away impressed.

First off, let’s talk about how attractive it is. Encased in a gray nylon cloth fabric, the device tapers along the top from the front to the back, giving it a smaller profile despite the four-inch screen. Unlike the Echo Spot, which has a round screen, the smart clock features a rectangular screen. There’s a USB port on the back to plug your phone in (something we haven’t seen in a smart display yet) and a mic on/off shutter.

When the Echo Spot was introduced, some were concerned about that fact that the clock had a camera. Lenovo decided to keep it cameraless with the Smart Clock, so you don’t have to worry about anyone seeing you while you’re in your bedroom (although that also means the device doesn’t support two-way video calling).

There’s little ability to customize the screen, with just three clock faces available, although Google executives say that more personalization will be on the way (for example, you might be able to choose from more than three faces, or even personalize your screen with a photo).

We really appreciate some of the thoughtful features Lenovo and Google included in the device. Beyond Bluetooth connectivity, you’ll find that the device features a gentle wake-up mode, which means that 30 minutes before your alarm goes off, the clock face slowly gets brighter, and if you have smart lights connected to your device, those slowly brighten as well.

When your alarm goes off, hit anywhere on the device once to snooze, and hit it twice to turn off your alarm entirely and launch into your customized routine. For example, a routine could involve turning on the lights, and then getting your reminders, schedule for the day, morning commute time, and anything else you set up — all by voice. During initial testing, we found this feature worked really well.

Lenovo decided to keep it cameraless with the Smart Clock, so you don’t have to worry about anyone seeing you while you’re in your bedroom.

Like any Google Home device, you can connect and control Google Assistant-compatible door locks, lights, smart plugs, and more through the clock by using your voice. “Hey Google,” or “OK Google” are the wake words that will do everything a Google Assistant device does, including playing music or setting a reminder to pick up your dry cleaning.

You can also view footage from connected cameras, so if you have a Nest cam (or other compatible device) set up in your baby’s room, you can use the Smart Clock as a baby monitor to make sure she’s sound asleep.

We were able to listen to some tunes by saying, “Hey Google, play jazz music.” The device immediately played a jazz station from Google Play Music. We’ll say that for a bedroom device, the speakers sound pretty good. Don’t expect crazy, booming sound, though — that’s not what this device is about. It does support multiroom functionality so you can play audio across multiple speakers in several rooms. It also works with Chromecast, so if you have a TV in your bedroom, you can ask your smart clock to stream your favorite TV show.

Unlike the Lenovo Smart Display and Google Home Hub, there is a limited smart home hub pulldown menu. A translation mode (where you see the words you say to the device) isn’t supported due to the small size of the screen.

Overall, we’re impressed with this cute little alarm clock. It’s compact, so it’ll fit nicely on a nightstand or desk. It’s the smallest Google Assistant-supported device with a screen, and also features a relatively affordable price tag at $80 (the Amazon Echo Spot, its closest competition, is $130). We look forward to getting a review unit to test in our home, and we’ll update you on how well it works when we do.