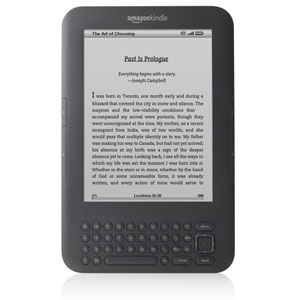 Today, Amazon announced that Kindle apps will be made available for Android and Windows based devices, further growing the family of devices which users can use to read books downloaded through the Kindle app. The new Kindle apps built for Android and Windows tablet computers will let customers “Buy Once, Read Everywhere”–on Kindle, Kindle 3G, Kindle DX, iPad, iPod touch, iPhone, Mac, PC, BlackBerry, and Android-based devices.

“Kindle is light weight, easy on the eyes with a paper-like Pearl e-ink display, and has a full month of battery life. It’s purpose-built for reading. Many people are buying both a Kindle and an LCD tablet computer,” said Dorothy Nicholls, Director, Amazon Kindle. “We’re very excited to support the upcoming Android and Windows LCD tablet computers with free Kindle apps that we’ll tailor for the particular devices. Our Whispersync technology makes it simple to move back and forth between devices. Read on your Kindle, read on your tablet, read on your phone. We’ll keep track of your last page read, and make it easy.”

In an increasingly competitive market for digital readers, Amazon has been able to stay competitive by diversifying beyond the Kindle device. Other competitors include Barnes and Noble’s Nook, the Apple iPad application iBooks and the Kobo Reader.

The Kindle Store offers one of the largest selections of books to read digitally. In addition to allowing users to buy a book once and read it on multiple platforms, Amazon also automatically backs up books so you can re-download them anytime.