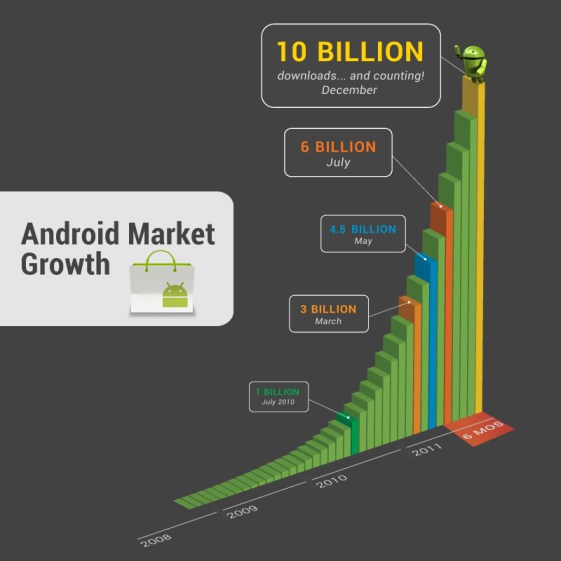 Google announced on Tuesday that 10 billion apps have now been downloaded from Android Market and to celebrate hitting what it considers to be a milestone (yes, it is a rather large number) it’s hooked up with some Android developers to offer a selection of apps at the dirt cheap price of 10 cents. The offer will last 10 days.

Ten billion is pretty good going seeing that the platform was only launched in 2008, but as Chu says, the growth rate is what really catches your eye. The bar chart says it all – launched in October 2008, things got off to a slow start with it taking 21 months to reach a billion downloads. But increased sales of Android-operated phones, as well as an increase in the number of apps being added to the market, was only ever going to mean one thing.

By July this year, things were really moving for Android Market as it hit the six billion mark. In the last four months alone, four billion apps have been downloaded to mobile devices using Google’s operating system.

As a comparison, while it’s taken Android Market a shade over three years to hit 10 billion downloads, it took Apple’s App Store, which launched in July 2008, two-and-a-half years to hit the same figure.

Android Market was overhauled in May this year, making it easier for users to find and discover new apps. The revamp also addressed the concerns of developers who had been complaining that the vast majority of apps were buried deep within the store, making them hard to find.

“Of course, none of these apps would have existed if it weren’t for the developers who created them,” Chu wrote in his blog post. “Every day, these developers continue to push the limits on what’s possible and delight us in the process. For that, we thank them. Please join us in this 10-day celebration and check in every day to see what new apps our developer partners are making available on Android Market – for only a dime.”