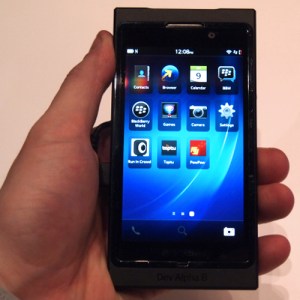 Not everyone has to wait until the end of the month to see BlackBerry 10 in action, as Austrian tech blog Telekom-Presse has posted an extensive video test of Research in Motion’s new operating system in use on the BlackBerry Z10. The site notes the hardware is a pre-production prototype and it’s a beta version of the software.

The Z10 has been leaked several times already, but it’s good to get further confirmation of the device’s specifications. The prototype seen in the video has a 4.2-inch touchscreen with a 1280 x 768 pixel resolution, while inside is a 1.5GHz processor with an impressive 2GB of RAM. An 8-megapixel primary camera sits in the corner of the rear panel, and there is a 1.9-megapixel video call lens above the screen. Finally, a microSD card slot lets you add to the standard 16GB of storage memory.

If you watch the video below, you’ll get to see the BlackBerry 10 interface in action again, along with some of the very cool transitions between screens – just take a look at the fade as the lock screen is swiped away. However, unless you speak German, the commentary won’t be all that helpful. By using Google Translate on the accompanying written piece, it’s clear the author is impressed with BlackBerry 10, calling it, “Smooth,” and the camera, “Excellent.”

We had a chance to play with BlackBerry 10 again during CES 2013, and also found the experience vastly improved over previous versions. There’s just over two weeks to go until BlackBerry 10 is launched, and according to recent rumors not only is the application store filling up at a surprisingly fast rate, but the new hardware could be on sale in some places by the end of February.