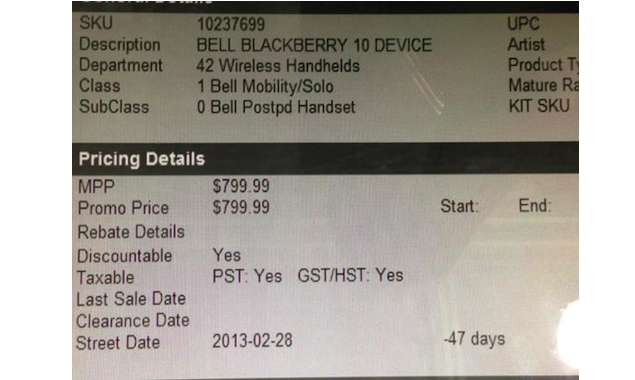 Research in Motion will unveil BlackBerry 10 in just over two weeks time on January 30, but you won’t be able to buy the phones running the new operating system until sometime after the global launch event. The exact date should be revealed on the day, however in November last year, RIM’s chief operating officer let slip in an interview that BB10 phones would be on sale within 30 days of the event.

Now, an image has circulated on the Internet purportedly showing a screenshot taken from Best Buy Canada’s stock control system, where a BlackBerry 10 device headed for the Bell network is listed for release on February 28. Coincidentally – or not – that’s 29 days after the official debut.

What’s more, the screenshot also provides the retail price of the phone, a rather high $799. Although which model of BlackBerry 10 this refers to isn’t stated, we’d be surprised if the QWERTY N Series device was so extravagantly priced, and expect this to be for the touchscreen Z10. Even so, a presumably SIM-free cost of $800 puts it just $50 shy of an unlocked 64GB iPhone 5 from Apple, and at least $250 more than the average cost of a 16GB Samsung Galaxy S3.

Of course, there’s nothing to say the price – or the release date, for that matter – seen in the image is genuine, and both could be placeholders waiting for RIM to provide solid, official information at the end of the month.

We had the chance to spend some quality time with BlackBerry 10 during CES 2013, and found it had improved considerably since out first meeting with RIM’s potential savior some six months ago. However, here’s hoping that steep price tag isn’t right, as the last thing RIM wants to do is price itself out of the market.

Topics
Video-editing app LumaFusion to get a Galaxy Tab S8 launch
Using the OnePlus 10 Pro again made me worried about the OnePlus 11
The best Samsung phones in 2023: our 8 favorite Galaxy phones
The 5 worst iPads of all time
Looking back at our favorite phones of 2022 — and why we loved them so much
The best iPhone apps in 2023: 50+ apps you need to download now
The iPhone 15 Pro’s rumored new design is one I can’t wait for
The best folding phones in 2023: our 6 favorite foldables right now
You can finally take ECGs and track AFib on a Garmin smartwatch
I bought a $50 Apple Watch Ultra clone, and it blew me away
Best cheap phones in 2023: our 5 favorite ones for tight budgets
How to get Apple’s Black History Month 2023 wallpapers for your iPhone and Apple Watch
Yes, we really are completely spoiling the OnePlus 11 and Buds Pro 2 launch