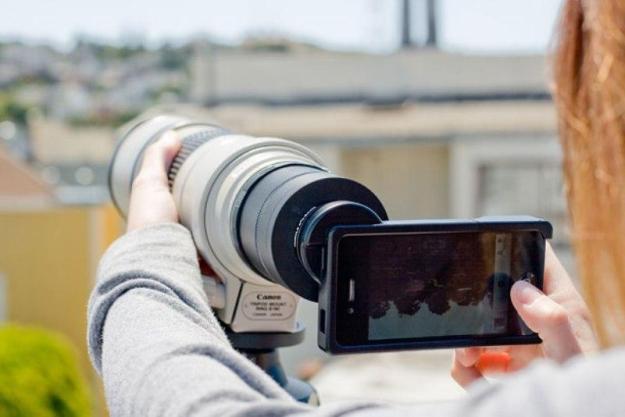 Would you spend $180 for a course teaching you how to use your iPhone camera? Now you can. It’s a real class at Kensington and Chelsea colleges in London, where professor Richard Gray teaches students how to use the simple smartphone camera.

Is the class a great opportunity for budding photographers to hone their skills on inexpensive equipment, or a case of higher education pandering to the masses?

Not surprisingly, some polarized opinions on the subject cropped up around the Digital Trends offices, so we posed the question to camera reviewer Molly McHugh and mobile reviewer Jeffrey Van Camp:

I’ll be the first to admit that the best camera you have is the one with you — but that doesn’t mean you should make the iPhone your one and only camera, nor think you can use it to learn how to be a photographer. If it’s your on-the-go camera of choice, that’s completely understandable, but beginning your experience with a camera phone is setting the bar incredibly low. Sure, it can best many point-and-shoots on specs, but you will get no sense of how to use manual controls. And while the digital camera form factor might be evolving, it doesn’t end at the iPhone – or any camera phone for that matter. There are basic principles of manual photography as we know it that I believe are important enough to carry over in that evolution.

It’s extremely limiting to begin your photography education with a device that doesn’t allow you set ISO and has no sort of burst mode, among other things. It’s setting us up for a world of photographic mediocrity. Want proof? Let’s get a photo taken with the iPhone and one with a DSLR, blow them up to 8×10 and see which you like better.

If you bought an iPhone 4S, or will be first in line to get the Nokia PureView 808, by all means continue to flood Instagram with your photos. The lines between manual photography and “iPhoneography” have been blurred enough – and a college course dedicated to this isn’t going to help matters.

Molly, you’re crazy. This is fantastic. When I took a photography class in college, we had to shell out more than $200 to loan a camera and purchase supplies after that. And the cameras we learned on were already outdated by DSLR standards. Some people can’t afford that.

You don’t need a DSLR to learn how to be a photographer. Learning photography is learning how to see the world differently and find magic in the ordinary. You can learn about leading lines, shot composition, framing, the triangle rule, portraits, cropping, post production, and a ton of other fundamentals of photography with an iPhone or a good smartphone. No, you can’t zoom as well, change the depth of field, or mess with the shutter speed, but why in hell do you need to learn all of that in an introductory course anyway?

Since there’s a much lower barrier for entry for a class like this, more people can learn the fundamentals of photography and possibly appreciate them. It will likely inspire more people to take the next step and dive into photography as a passion or career. It’s inspiring to see colleges thinking about how to help kids learn in forward-thinking ways with less expense. It might serve many people more to know a bit of photography (and some fantastic apps) than none at all.

You’re making my argument for me: Why have an iPhoneography course when it’s so simple?

Why would you lay down money to figure out how to use one button? It’s beyond me why a classroom of students needs someone to tell them how to use Instagram or Camera+. These apps are built for the lowest common denominator — every update announcement from these companies is overrun with the phrase “easy to use.” There’s no need for a class to learn how to use these. The very idea behind them is to make ordinary — and in many cases, unartistic — photos look better and more professional than they actually are.

Photography, in its truest form, is a skill — and a difficult one to master at that. I completely disagree that smartphones are inspiring people to become more serious about photography. In fact, I think it’s having the opposite effect: People who used to bring their cameras with them are instead relying on their phones. The result is inarguably worse photos — no matter how many filter or panorama apps you download, the images still can’t compete with the quality from some cameras that are even cheaper than some smartphones.

So it’s fine to take your camera phone pictures and use apps to your heart’s content, but we’re already forsaking photography enough, and a class is only going to reinforce that.

Well you won’t find me defending teaching Instagram filters for a semester, but it’s okay to spend a day on some apps, sure. Yeah they’re stupid and silly, but so are many of the fancy functions on some DSLRs.

I feel like you’re glossing over the importance of learning the fundamentals of photography. Learning photography on a smartphone doesn’t have to be just about using stupid apps. I’m sure the majority of such a course (if it’s a good one) would be about learning composition and things that really matter. I don’t think that these skills come naturally. They take practice and instruction, like any good skill. People don’t take photography classes just to learn how to operate a DSLR. (Why bother? It comes with a manual.) They come to learn how to photograph. And with your line of reasoning, why do we go to any classes at all, ever? You can find anything on the Internet, right?

Some of the coolest photographs are black and whites from the 1930s and other eras. They didn’t have DSLR cameras. They only had their knowledge of how to compose a great shot. Some photographers waited hours or days to get the shot they wanted, because they only had one chance. DSLRs are just a technology, much like smartphones. There’s no reason why kids can’t learn the basics on a smartphone. In 10 years, it’s likely that phones and DSLRs will be completely different than they are today anyway. In a basic introductory course, it’s not always the tech that matters. It’s the skills learned.

My point is you’re spending money on something that middle schoolers can accomplish with finesse (sans classes) and, you won’t learn the requisite skills to become a good photographer.

If anything, what you get from using a smartphone and accompanying apps hurt your ability to find subject material. That terrible snapshot of a garbage can isn’t art — until you throw a filter and blur effect over it! And don’t give me that crap about “art being all around us,” I’m not buying it. These things are for one thing: fun. Not honing your craft or refining a skill.

Your point that you can learn everything you need to from a DSLR manual shows you don’t have a great grasp on using one (Which in fact, I know to be true. You’re welcome for all those photos I took with my DSLR for you at CES. Yeah, I went there). Yes, they are intricate and extensive gadgets, but there’s a reason photographers freak out when Nikon and Canon release more and more capable devices: because they can do more and they can do better. Learning how to manipulate these machines means you’re willing to put in the time to create images that best mimic what the human eye sees — and that is a difficult thing to do and something that deserves more attention.

For hobbyists a smartphone may be “good enough,” but don’t think that learning photography from an 8-megapixel camera without an optical zoom is an education. Taking that path most certainly does not lead elsewhere. What part of tapping a screen translates to aperture or shutter piority? None. These aren’t related skills. You can’t just give what should be a hobby an educational or trade status. It infers that someday someone could employ themselves as an iPhonegrapher — and that’s upsetting.

That statement about a manual was a joke. If you’re going to argue that it’s super easy to learn the basics of photography on your own, then I can tell you that it is just as easy to buy a DSLR and learn what aperture and shutter speed do. You can learn anything alone if you want. I happen to think there’s plenty that students could enjoy learning on the cameras that they are going to have in their pockets every day. Not everyone is a photography wizard like you apparently were in the 7th grade. Even the basics require teaching. Nobody is taking this class thinking that they’re going to get a job in iPhoneography, but at least they’ll know what their phones are capable of, or not capable of.

Smartphones, laptops, tablets… all these technologies (and others) are making it possible for everyone to create content that, sure, isn’t Oscar-worthy, but isn’t half bad either. Home video cameras haven’t ruined cinema. Just as it will always be important to learn how to use professional tools like a DSLR, it’s also vital that we learn the capability of the devices we can actually afford.

The majority of photography lessons I learned apply beyond one piece of technology. One of these days, smartphones will begin to get variable shutter speeds and apertures too, but  I don’t think it’s setting anybody back to learn more about the device that will be a part of photography in the future, whether you like it or not. Smartphones aren’t going away. They will have cameras. The more people who learn how to use them, the better

Video-editing app LumaFusion to get a Galaxy Tab S8 launch
How to change the time font on your iOS 16 lock screen
Which $1,000 phone has the better camera — iPhone 14 Pro or Galaxy Z Flip 4?
How to add multiple wallpapers and change your home screen on iOS 16
Best Apple deals and sales for September 2022
The best wireless keyboards for 2022
The best wireless earbuds for 2022
Apple rolls out iOS 16 update to fix frustrating camera-shake, paste bugs
Hey look, the iPhone’s Dynamic Island has come to … Android?!?
Why I stopped wearing my smartwatch — and why I haven’t looked back
How to transfer your SIM from an Android phone to an iPhone 14
Google Pixel Tablet leak reveals key specs about the mysterious device
How to buy the new Apple Watch Series 8, SE, and Ultra