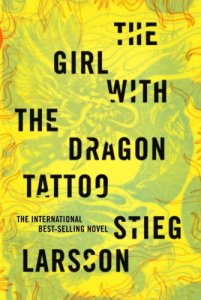 The opening book of Swedish author Stieg Larsson’s Millennium Trilogy, The Girl With The Dragon Tattoo, has become what industry experts believe is the first novel to sell more than a million copies in e-book form, The New York Times reports. News of the million mark milestone comes via Knopf books, which is a subsidiary of Random House publishing.

Combined digital sales of the Millennium series, which also includes The Girl Who Played With Fire and The Girl Who Kicked The Hornet’s Nest, have so far reached 3 million, the publisher said. Total sales of The Girl With The Dragon Tattoo, which includes e-books, audio books and printed copies, are maintaining an impressive steady pace of about 500,000 copies per month. Hardback covers of the book, which first went on sale in September 2008, have reached a total of about 300,000 copies.

While no other publisher claims a single title has reached the 1 million sold mark, some authors can claim more than a million copies sold — of all their works combined. Those best-selling authors include Penguin Group USA’s Nora Roberts, who has written more than 200 novels. Since 2009, every single one of her books has made The New York Times best-seller list, which has presumably helped her e-book sales significantly. Another e-book sensation is thriller author James Patterson, whose sales of Amazon Kindle e-books passed the 1 million mark in October of last year.

Authors with backing from big-name publishers aren’t the only ones reaping the benefits of e-publishing. Self-published author Amanda Hocking 26, who has released 10 titles on the Kindle, sells approximately 100,000 digital copies of her novels each month. The sales reportedly bring in about $2 million in sales each year.

The e-book boom isn’t good for everyone, however. Brick and mortar bookseller Borders was forced to file for Chapter 11 bankruptcy in February due to loss of business at least partially caused by Amazon sales. The company will remain open, but is reportedly shutting down about 30 percent of its retail locations.