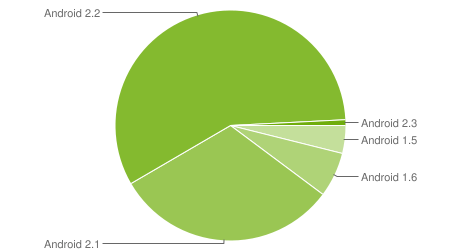 The Fragments API actually hit the Android developers blog last month, but it was only available for Android 3.0. This new version will reach all the way back to Android 1.6, so that developers don’t have to choose between making an app look pretty on the next batch of Android tablets, or making it compatible with the bulk of Android devices out there.

Of course, Google always says its Android’s smartphone OS will someday be united with its tablet OS. Google’s habit of pushing out new operating systems so quickly has left many users running older version of Android (the chart above shows the current state of Android OS users), and a minority of them are actually using Gingerbread. That isn’t to say that Android isn’t a choice OS, it definitely is. But there’s no denying its users are spread across the board, often running outdated systems for prolonged periods of time only to get an upgrade as its successor is introduced. Which could be the case when Ice Cream debuts: Most Android users are stuck running 2.2 (Froyo) and if we’re to believe 2.4 is right around the corner, it seems like quite a few phones are going to be stuck in OS limbo. It isn’t just users that suffer from fragmentation, as it can be difficult for programmers as well.

But Google is being proactive about the situation, and this “Fragment” library is a step towards a solution. Giving any device running Android 1.6 or later (which we’re happy to say is nearly every handset out there) access to the Honeycomb’s Fragments API is inching closer to OS unity.