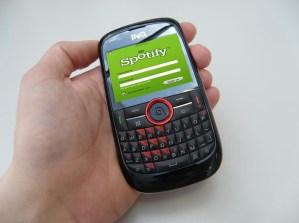 INQ CEO Frank Meehan announced today that his company is partnering with online music service Spotify on a new smartphone. The social-adept cell phone manufacturer plans to incorporate the music feature into the phone’s structure, making it a core function of the device.

Spotify has been attempting to break into the US market for some time, and recently was integrated into Shazam, which identifies music for smartphones. It was reported earlier this year that two devices from INQ’s upcoming line will be released through AT&T in the US sometime this year, one of which could include the Facebook phone.

A couple of weeks ago, we caught wind of a Facebook-INQ project that INQ itself said would feature two Android smartphones with “Facebook built into its core” (at least until the company edited the description of all things Facebook). It seems possible that these upcoming models may also feature Spotify, which seems like an ideal opportunity for the music service to piggyback onto.

In his announcement, Meehan would not comment on any INQ products involving Facebook. An inside source recently told Reuters that while Spotify is focused on a US launch, it won’t be this quarter. But the mythical INQ Facebook phone isn’t slated for another few months, so don’t count anything out yet.