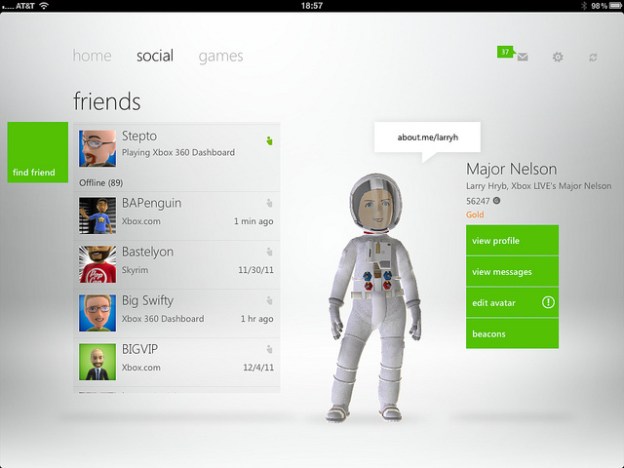 Coinciding with the Xbox Live dashboard update, Microsoft has released two new apps for smartphone users. While we knew about the Windows Phone’s Xbox Companion App, the iOS app was a bit of a surprise.

The official Xbox Live iOS app, dubbed My Xbox Live, is free and designed for both the iPhone and iPad. Not surprisingly, My Xbox Live is a slimmed down version of the Windows phone Companion app. Apple device owners will have a limited ability to modify your 3D avatar’s appearance, read and send messages to friends, edit profile, add new friends to the list and view achievements.

Interestingly, the iOS app has an interface similar to the Windows Phone Xbox Companion app, replicating that horizontal bar populated with circular icons at the bottom of the screen. Microsoft probably wouldn’t feel bad if it lured defectors over to its OS.

PC World points out that one of the major features the official Xbox Live iOS app is missing is the ability to support notifications; no notifications for new messages or game invites and the app seems to be a ghost in the iOS settings.

Xbox Companion for Windows Phone connects to your console and functions as a sort of remote control. Most noteably, users can use the apps Bing-powered search to trawl through the Xbox catalog for TV shows, games, music, movies and apps, and can then use the Windows Phone to launch a selected search result on your console. Using the app on your phone to navigate the Xbox desktop, purchase content and even control the playback of media on your console. Your smartphone will also give you details about whatever you’re playing, as well as showing you what your friends have recently played. Just like the iOS app, the Windows Phone app is free.