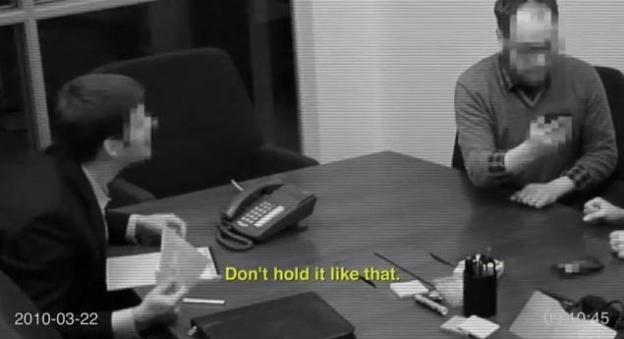 With the launch of Nokia’s eagerly awaited Lumia 900 smartphone almost upon us, it seems that the company is wasting little time in trying to persuade consumers that there is indeed an alternative to Apple’s iPhone.

A humorous ad campaign, which despite any direct references to Nokia nevertheless appears to be the work of the Finnish smartphone company, features three videos, all of which indirectly but rather obviously target the iPhone.

The videos begin with a voiceover: “If you ever thought that maybe your smartphone wasn’t all that it was cracked up to be, that’s because it wasn’t. In this recently obtained, never-before-seen footage, we go behind the scenes to get the rest of the story.” On screen we see a pixellated smartphone that looks remarkably like the iPhone.

In the Death Grip video (check it out below), we find ourselves in a small office, with three people sitting around a desk. It’s 2010, and one of the guys at the desk is wondering why all the signal bars on his phone have disappeared. “That’s because you’re holding it wrong,” says the other guy, in a clear reference to Apple’s so-called antennagate episode. “Shouldn’t I be able to hold it however I want?” retorts the guy with the phone. “Use the approved grip,” the woman shoots back.

The second video has the same guy saying that the phone’s screen washes out in the sun. “People can just stay inside,” the woman says dismissively. The phone’s fragility is the subject of the third skit — a study in 2010 appeared to show that the screen of the iPhone 4 was more likely to break than its predecessor, the 3GS.

The videos appear on The Smartphone Beta Test website, which also has on its main page a video showing former Saturday Night Live comedian Chris Parnell sitting restlessly in a chair, waiting for something….the launch of Nokia’s new device, perhaps?

The launch of the Lumia 900 Windows Phone handset later this week marks Nokia’s big return to the US high-end smartphone market, and it’s evidently keen to get in early as far as taking a swipe at the competition is concerned.

For Apple, it’s not the first time it’s been the target of a rival’s ad campaign. Late last year Samsung made fun of Apple devotees in an ad for its Galaxy S II device.

Topics
Video-editing app LumaFusion to get a Galaxy Tab S8 launch
OnePlus 11 vs. Google Pixel 7: the top Android phone under $700?
Qualcomm’s Snapdragon X35 will bring 5G to your next smartwatch
Does the OnePlus 11 have a headphone jack? What you need to know
Does the OnePlus 11 come with a screen protector?
AirPods Pro are back down to their cheapest-ever price
I love (and hate) this stunning iPhone 15 Ultra concept
Samsung Galaxy S23 vs. iPhone 14: Apple’s grip is starting to slip
Strap a Samsung Galaxy Watch 5 Pro on your wrist while it’s $50 off
There’s a huge sale on Kindle e-readers happening today
Going to pre-order the Galaxy S23? Don’t miss these deals
Best Google Pixel Deals: Pixel 7, Pixel Watch, and Pixel Buds
OnePlus wants to tempt you back to Android tablets with the OnePlus Pad