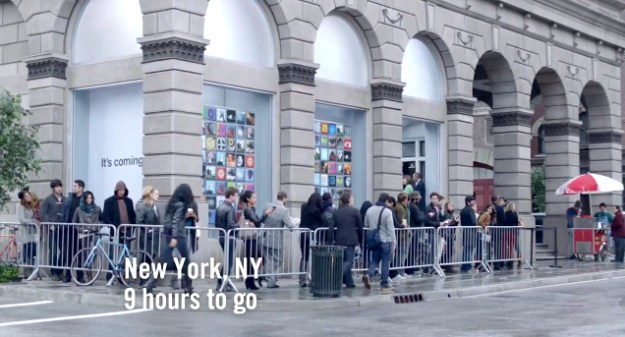 The opening shot of the ad displays some text at the bottom of the screen: “New York, NY. 9 hours to go.”

Outside an Apple-looking store stands a line of people. They’re not waiting for a bus, so it must be the launch of Apple’s latest product they’re there for. And yes, in one of the windows of the store you can see a sign that says “It’s coming.”

If you think this is the beginning of a TV ad from Apple, think again. It’s actually a new Samsung ad for its Galaxy S II Android smartphone. The 60-second commercial (check it out below) evidently takes great pleasure in poking fun at diehard Apple fans – the kind of people that wait for days outside Apple stores prior to a product launch.

Cutting between lines of similar fashionable-looking types in various cities across the US, the first part of the ad comprises snippets of conversation between those waiting. “Guys, I’m so amped I could stay for three weeks,” one says, while another complains to a friend: “If it looks the same, how will people know I upgraded?”

Suddenly, the people in line are distracted by a person nearby using a smartphone that isn’t an iPhone. There’s something about the device that catches their eye. They call the person over. They notice the screen, which is “pretty massive.” “And it’s got 4G speed.”

The people in line seem impressed, until someone mentions it’s a Samsung device. “I could never get a Samsung, I’m creative,” says one guy waiting in line. “Dude, you’re a barista,” his friend reminds him.

It’s an ad that non-Apple fans will no doubt take great delight in watching, while Apple devotees, sensitive ones at least, may find it hard to sit through. Whether it’ll actually persuade anyone to go for a Galaxy S II over an iPhone 4S is another matter.

Last month the S II beat the iPhone 4 to win the smartphone of the year award at the annual T3 awards show held in the UK.