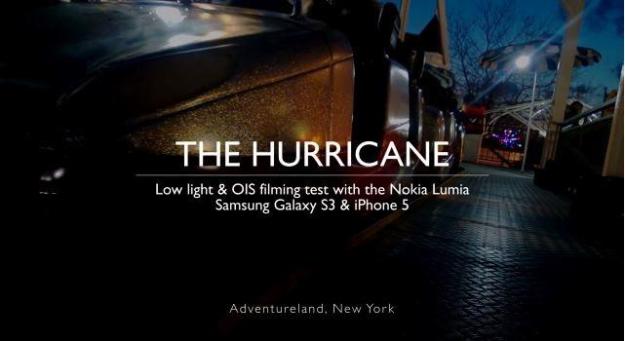 Nokia has updated its teaser website for its upcoming Lumia 928 smartphone with a YouTube video that purports to demonstrate how much better the handset’s camera performs in low-light conditions compared to other leading smartphones already on the market.

The video (below) pits “the new Nokia Lumia” against the iPhone 5 and Galaxy S3 and comprises a 90-second sequence shot on the Hurricane Coaster at Adventureland in New York, a ride that promises to “drop you virtually straight down and complete a 180 degree turn in the blink of an eye.” But that’s not important. What is important is that it’s pretty dark.

“We took the new Nokia Lumia to Adventureland in Farmingdale, New York and strapped it to the front row of a rollercoaster called The Hurricane”, Nokia says on the video’s YouTube page. “We thought we would capture some video footage alongside the Samsung Galaxy S3 as well as the iPhone 5. Which phone takes better video on this shake-filled and low-lit ride? You decide.”

Of course, there isn’t much deciding to be done, as Nokia would of course have hastily consigned the video file to the trash can had it shown the 928’s images to be inferior to those of its rivals. In side-by-side comparisons in the latter half of the video, the Lumia’s images do indeed look crisper on the whole, with Nokia claiming “greater color saturation” and “sharper image focus” compared to the iPhone 5’s footage. Against the S3, the 928’s images demonstrate “sharper image focus” and “less video noise”, according to Nokia.

The mobile maker arrived at its conclusions by selecting single frames from each handset’s video, but freeze the side-by-side sequences at random moments by yourself and you might not see such a huge difference in quality.

The Finnish firm’s yet-to-launch 928 model hasn’t even been officially unveiled yet, though some expect the reveal to take place at a special Nokia event in London scheduled for May 14.

A recent Vanity Fair ad for the 928 revealed the device will incorporate Nokia’s PureView imaging technology, image stabilization and a top quality Carl Zeiss lens. As for its low-light capabilities, you decide (once it hits stores).