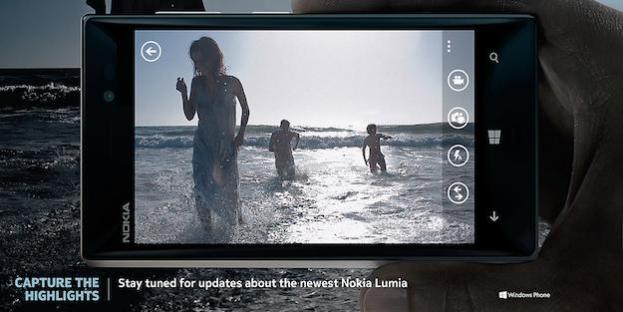 As we wait to see what Nokia will reveal on May 14, the company has launched a teaser site for the rumored – and now confirmed – Lumia 928, a version of the Lumia 920 expected to arrive on the Verizon network very soon. The site shows the front view of a big-screen phone about to take a picture of a beach scene, however the image on the display is far brighter than the real-life view surrounding the phone. This hints the device’s camera will have excellent low-light performance.

It’s the same picture which has appeared in an issue of Vanity Fair magazine, which showed the Lumia 928 with Verizon branding, missing from Nokia’s picture. Building on the tease in the picture, a little advertising blurb stated the phone would have a PureView camera and image stabilization software, the same as the Lumia 920. While the print ad explicitly calls the device the Lumia 928, Nokia’s website only gives the name in the URL.

So, while the existence of the Lumia 928 is no longer in question – evidence doesn’t get much better than a webpage from the manufacturer – its announcement date is still up for debate. There are some who think it’s coming on May 14, however it still seems bizarre for Nokia to launch a U.S.-only phone in London, and the Verizon event on May 22 at CTIA seems like the more sensible choice.

As for May 14, the most recent rumors point to the arrival of the Lumia 925, which may be the GSM version of the Lumia 928. The Lumia 925 could be the retail name of the Nokia Catwalk, a phone which could have a new aluminum body, which should see it shed the weight carried by the Lumia 920. All will be revealed on the day, but whatever happens, at least we now know the Lumia 928’s launch is very close.