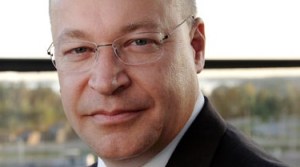 Once king of the wireless world, Nokia has fallen behind recently, with a 21 percent drop in revenue in the final quarter of 2010, and a recent loss of its hold on the worldwide smartphone market share to Android. But if recent rumors are true, the Finnish mobile giant isn’t taking the beating laying down.

A report by Andrew Orlowski at The Register says that Nokia CEO Stephen Elop plans to move the “executive center” of the company to Silicon Valley, where a “virtual HQ” is planned. If true, the move — considered a “radical” change for the 150-year-old company — would require Nokia’s board of directors to spend a significant portion of their working hours outside of Finland.

Elop, a former Microsoft executive who appears determined to regain Nokia’s competitiveness, is the first non-Finnish CEO the company has had. A move to the United States would only add to the dilution of the brand’s national identity.

The report of Nokia’s potential Silicon Valley move coincides with multiple reports that the brand may ditch its Symbian and Meebo operating systems — both of which Elop has labeled as lacking competitiveness — in favor of either Windows 7 Mobile or Google’s Android OS.

This rumor is at least partially based on a leaked internal memo, entitled “Standing on a burning platform,” in which Elop says Nokia is being attacked on all fronts — by Apple from the high-end, Android from the middle and MediaTek from below.

In a recent statement, Elop also says Nokia’s only options are to “build, catalyst or join a competitive ecosystem.” The “build” reference purportedly pertains to Symbian and MeeGo; “catalyse” is about adopting Windows 7 Mobile; and “join” means going to Android. (At least that’s the way TechCrunch Europe‘s Steven O’hear is interpreting it.)

As we’ve already noted, a Nokia-Windows 7 partnership would be disastrous for a plethora of reasons, starting with the fact that neither has the momentum to save the other from drowning — even if Microsoft does have deep enough pockets to keep a dead horse on its feet.

Unfortunately, a report from the Financial Times indicates that Nokia is receiving pressure from a range of its European carriers, including Vodafone, Telefónica, and France Telecom, to not adopt Android, as the market is already saturated by handsets running on that OS.

Whatever the rumors, we should have a better idea by the end of the week what Elop has in store for Nokia when he takes the stage at the company’s annual Capital Markets Day this Friday.

Topics
Video-editing app LumaFusion to get a Galaxy Tab S8 launch
The best grocery list apps for iPhone and Android in 2023
My iPhone 14 Pro camera is ruined, and it’s all Apple’s fault
The best QR code scanning apps for iPhone and Android in 2023
Trading in your iPhone with Apple? You’ll get less than yesterday
The best iPhone apps in 2023: 50+ apps you need to download now
The iPhone 15 Pro’s rumored new design is one I can’t wait for
The best folding phones in 2023: our 6 favorite foldables right now
You can finally take ECGs and track AFib on a Garmin smartwatch
I bought a $50 Apple Watch Ultra clone, and it blew me away
Best cheap phones in 2023: our 5 favorite ones for tight budgets
How to get Apple’s Black History Month 2023 wallpapers for your iPhone and Apple Watch
Yes, we really are completely spoiling the OnePlus 11 and Buds Pro 2 launch