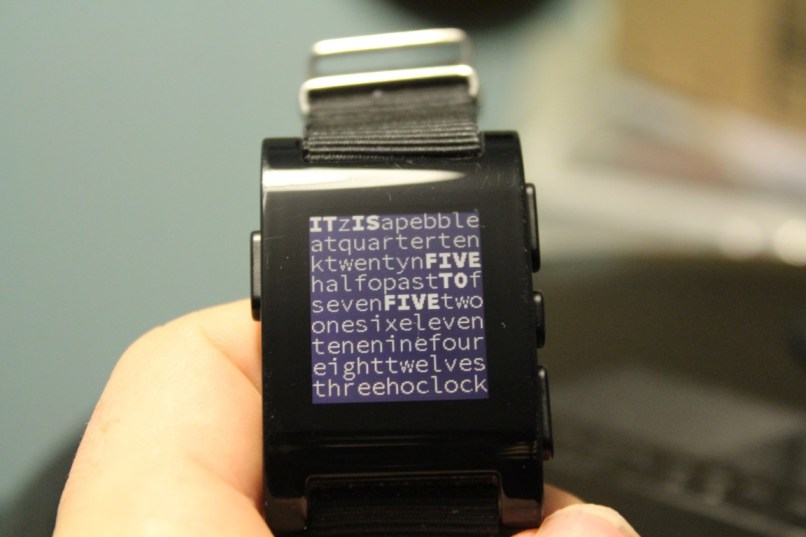 Check out our full review of the Pebble smart watch.

We’ve just gotten word straight from Pebble that its iconic smart watch will be receiving the big 1.9 update right now, and should be available for download as a firmware update via the Pebble app. The new update features a new reorganization of the watch-faces, bug-fixes, and prepares for the release of the SDK in April of 2013.

Pebble is a smart watch that was launched via Kickstarter in April of 2012, and in recent weeks has been slowly but surely shipping out to backers of the project while development continues. The 1.9 firmware update’s biggest change is with how the watch-faces are arranged on the device. Previously you’d have watch-faces sit right in the menu screen along with other options, such as ‘Settings’ and ‘Music’. Instead, the Pebble now stores all watch-faces in a special ‘Watchfaces’ menu in the main menu, and lets you cycle through your available watch-faces when on the home screen.

This new update also allows you to select a ‘Default’ watch-face that your Pebble will automatically return to after closing the menu screen. Previously you’d have to manually re-select the watch-face of your choice in order to close the menu and return to your watch-face. This makes the watch much more manageable and allows you to quickly cycle through a variety of watch-faces to show with friends, as well as allows future apps to have the ability to be quickly cycled through for quick information.

The update also includes various bug-fixes regarding functionality with the few applications Pebble is capable of interacting with, such as the phone dialer, Facebook, and Gmail. Most of all, version 1.9 is the big update before Pebble will be releasing its much-desired SDK in April, which will include a Snake game, as well as allow other developers to start making apps for the Pebble smart watch.

There’s also a new watch-face, Wordsquare, pictured above and now available on the Pebble app. Pebble continues to keep backers up to date via its blog page. Feel free to follow the company and figure out when they’ll be shipping out pre-orders for the watch.

Video-editing app LumaFusion to get a Galaxy Tab S8 launch
Hive Social is my favorite Twitter alternative, but that’s not saying much
Apple Music Replay 2022: where to find and how to see your listening stats
Best Black Friday iPad Deals: iPad Air, iPad Mini, iPad Pro
Google Pixel Watch Black Friday deal hasn’t ended yet – save $50
Samsung Galaxy Z Fold 4, Z Flip 4 get big Cyber Monday discounts
Why a Kindle Paperwhite is the best $100 you can spend on Cyber Monday
When is my phone getting Android 13? Google, Samsung, OnePlus, and more
This Amazfit fitness tracker is $35 for Cyber Monday, and it’s selling fast
This 10-inch Lenovo tablet is $129 for Cyber Monday (selling fast)
Save $200 on the Samsung Galaxy Tab S7+ with S Pen for Cyber Monday
The best smartphone stocking stuffers for the 2022 holidays
Don’t buy the wrong iPad during Cyber Monday — get this one instead