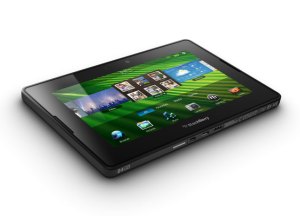 Here’s a public service announcement for owners of a recently purchased BlackBerry PlayBook. If your new toy came from Staples, you’re going to want to follow this link to a list of serial numbers compiled by Engadget. Why? It seems that a faulty batch of those lovely PlayBooks escaped into the wild and landed at the office supply chain.

The news comes from an internal Staples document stating that “approximately 900 units of the BlackBerry PlayBook have been determined to be faulty. The vendor has provided the serial numbers so that we can pull these off the floor and return immediately.” The sheet also says that leaving these items on store shelves “may result in a customer purchasing a unit that will not operate.” No further information is provided, though since some of these models have presumably been purchased — the PlayBook launched in April and has been doing quite well so far — it’s something we can expect to see Research In Motion comment publicly on soon.

Engadget’s list contains 935 serial numbers alleged to be affected by whatever the hardware fault is. Though if you bought yours at Staples and it doesn’t work, or suddenly stopped working, or became self-aware and tried to kill you, it’s probably a safe bet to just bring it back to the store and ask for a replacement. Unless it is currently in the process of trying to kill you, in which case you’ve likely got a whole other set of problems to worry about right now.

Kidding aside: Staples shoppers who bought a PlayBook recently, go and check that list out, whether or not your tablet is actually working.