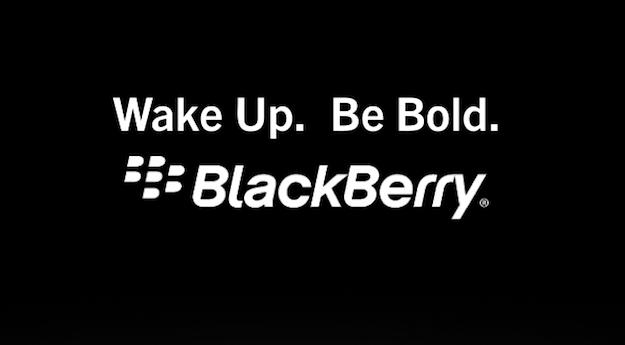 Research in Motion’s Wake Up flashmob campaign which took place in Australia recently was only the beginning, and we’ve now been treated to part two of RIM’s marketing master plan.

By visiting wakeupbebold.com, you’re treated to a scrolling wall of text on a black screen, complete with an earnest — but rather stilted — voiceover.

The focus is on business and business people. You know, the type of person who is 90-percent of the time a figment of Mr. Marketing’s imagination, and is supposed to “take action and make things happen,” and “eats opportunity for breakfast.”

This marketing nonsense goes on for a while longer, before telling us that we should be in business with the brand that’s been in business from the very beginning — BlackBerry. It closes with a link to the Australia and New Zealand BlackBerry Facebook page.

As the flashmob concentrated their 2009-level of wrath on Apple Stores, it’s no surprise to see another reference to them in the text. Apparently, people in BlackBerry’s business world “don’t just think different… they do different.”

If all this sounds a bit old-fashioned, you’re not the only one to think so, as according to an Australian marketing website, a rival agency to the one who designed the campaign for RIM called it “15-years out of date.”

But… Is it working?

Well, we’re talking about it! Plus it comes soon after BlackBerry World where we got an interesting — but very brief — look at BlackBerry 10. We also heard plenty about RIM’s continued love of business, evidenced by CEO Thorsten Heins’ guests, Cisco and SalesForce.

The campaign has also driven a few people to BlackBerry’s Facebook page, where comments include “you should have done this five years ago before Apple crushed your dreams” and “I just wasted my time listening to that Wake Up ad.”

Google lists between 80 and 100 news articles talking about the Wake Up campaign, the original video showing the flashmob has had more than 600,000 views (but the response video “outing” the fact it was RIM behind it all has only had 20,000), and the promoted Twitter hashtag #BeBold contains various references to BlackBerry devices in general.

While not all of it is positive, that’s still plenty of coverage.

Although the international press has picked up on RIM’s Wake Up campaign, its primary focus has been Australia, and here’s why: Apple’s iPhone has a larger share of the market there than it does in other developed markets, while RIM has its lowest.

A mere 5-percent of Australians are estimated to use a BlackBerry, while more than 25-percent use an iPhone, and the BlackBerry figure was still falling when it was reported in 2011.

This not only explains why RIM continues to bash Apple in its Australian campaigns, but also why it has chosen to make them as high-profile as possible. Things are bad elsewhere too, but not quite that bad.

The trouble is, it may not be that long until the situation in other markets does echo that of Australia, and RIM had better come up with something more effective than a flashmob and a poorly narrated webpage when the time comes.

Spotify has killed the Car Thing, its $90 in-car audio device that failed to find an audience

What is Google’s Pixel Pass and how much does it cost?

How to pre-order the Google Pixel 6a right now

Sigourney Weaver looks for love and hope in The Good House