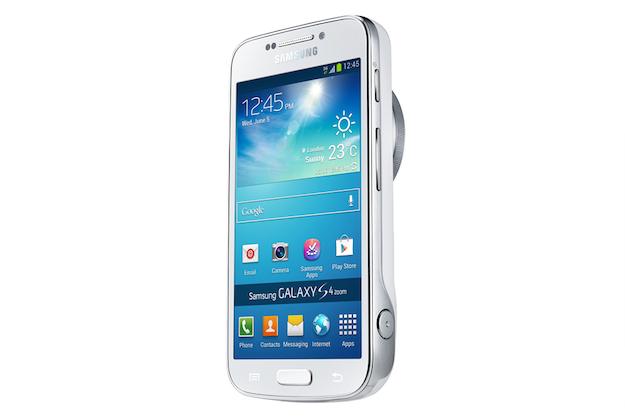 Check out our review of the Samsung Galaxy S4 Zoom camera/smartphone.

The Galaxy S4 Zoom is all about the camera, so let’s get right into its specs. A monster 16-megapixel backside illuminated camera is fitted to the phone, but that’s not the most impressive part, as it’s the first smartphone ever to feature a 10x optical zoom. That’s right, not a digital zoom, but an optical one, just like on most regular cameras. It’s controlled using Samsung’s Zoom Ring, which twists to not only zoom in and out, but also to quickly access the camera feature, even during a call.

Other camera specific specs include a xenon flash, HDR, optical image stabilization, ISO 100, 200, 400, 800, 1600, and 3200 settings, plus an aperture length of f/3.1 to f/6.3. It’ll also record 1080p video, and comes with Samsung’s Smart Mode, which offers various scene settings, plus it will suggest the best option if you’re not sure. Other software enhancements such as Sound and Shot, a Panorama mode, Best Face, and Continuous Shot can also be selected. One interesting new feature is Photo Suggest, which connects to libraries of images to help provide inspiration, and can even guide you to the best place to take a picture based on your current location. Story Album is also on hand to organize your collection.

Impressive camera, not so impressive smartphone

As you can see from the pictures, all this camera tech means the Galaxy S4 Zoom is a bit of a beast. Samsung claims the phone is 15.4mm thick, which sounds thinner than it looks and could relate only to the slimmest part, but at 208 grams, you certainly won’t be losing it in your bag. To put it into context, the S4 Zoom is heavier than the Galaxy Note 2, and only a few grams less than a compact camera such as the Canon Powershot SX280 HS.

After reading about the high-spec camera, you may be expecting the S4 Zoom to also impress with its phone-related spec. Sadly though, it’s has more in common with the Galaxy S4 Mini than Galaxy S4. It has the same 4.3-inch, 960 x 540 pixel, Super AMOLED screen as the S4 Mini, plus an unspecified 1.5GHz dual-core processor, and 1.5GB of RAM. There’s 8GB of internal memory, a microSD card slot, GPS, NFC and Android 4.2 Jelly Bean. The Galaxy S4 Zoom also has 3G and 4G LTE connectivity, along with a 2330mAh battery, which will probably be needed if the phone is to make it through a tough day snapping pictures.

Samsung hasn’t provided a release date or any details on the S4 Zoom’s price, but this will probably come during its June 20 event, where it’s looking like there won’t be any phone surprises at all.

Updated on 06/13/2013 at 06:00 by Andy: Samsung has released what it calls a, “Lifestyle demo video,” featuring the Galaxy S4 Zoom. This means it features attractive, fashionable people wandering around Milan, Italy, snapping pictures with the new camera phone. Lifestyle nonsense aside, it does give us a look at how Samsung’s Zoom Ring works, the new camera interface, and also the overall size of the device.

Updated on 06/18/2013 at 07:00 by Andy: UK online retailer Handtec has put the Galaxy S4 Zoom up for pre-order, giving us our first indication of the phone’s SIM-free, unlocked price; and it’s not cheap. To secure Samsung’s camera phone, you’ll need £468 in your wallet, which is around $735.